Back to Godhead > ~Featured~ > The Two Faces of Time

The Two Faces of Time

In this world time and tide wait for no man.
But beyond the walls of the universe,
time assumes a different feature. 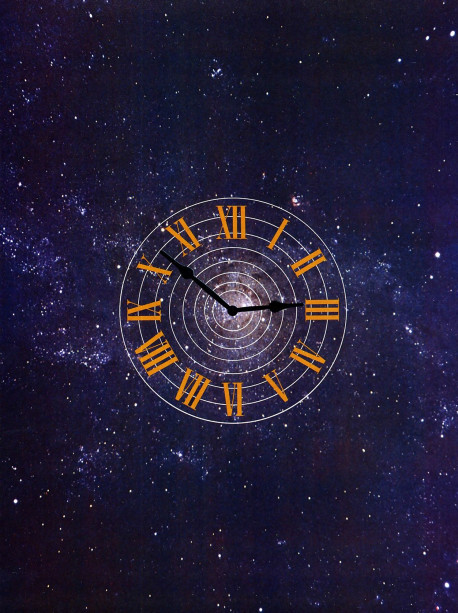 The question has perplexed philosophers throughout the ages. If you wanted to give a quick answer, you might say, “Time is what changes things.” Or you might want to go along with Albert Einstein, who said, in effect, “Time is what a clock reads.” Or maybe you consider the question itself a waste of time.

In the Bhagavad-gita, Lord Krsna, the Supreme Personality of Godhead, gives His own answer in a few words. “Time I am,” He says, “the great destroyer of the worlds.” Time, according to the Gita and other Vedic literatures, is an inconceivable energy of the Supreme Lord through which He ultimately destroys everything.

We measure time in terms of the movements of physical objects. The time the earth takes to orbit the sun we call a year. The time the moon takes to orbit the earth we call a month. And the time the earth takes to revolve on its axis we call a day. To further subdivide our days into hours, minutes, and seconds we observe the movements of other physical objects. Sand, water, pendulums, quartz crystals, and cesium atoms are a few of the things man has used to make his timepieces. By observing how many times these objects swing, rotate, vibrate, and so on during the greater movements of the planets, we can subdivide our days.

In fact, every physical object or mechanism is a clock of sorts, because everything physical is affected by time. Even the beating of our hearts and the gradual decay of our bodies can serve to measure the passing moments.

The Sanskrit word kala-cakra denotes time’s control of the cyclical movement of the physical world. Kala is a name for the Supreme Person in His feature as time, and cakra means “wheel.” Each and every physical thing, from the smallest atomic particle up to the complete form of the universe, has a particular wheel of time that it is obliged to follow. Kala-cakra therefore refers not only to an object’s movements but to its overall duration—its life expectancy—as well. The earth, sun, moon, stars, planets, our physical bodies, and so on disappear in the course of time, and their particular durations are all kala-cakras.

All our analysis and measurement, however, does not make time any less perplexing or any more perceivable. What we perceive in the movement and change of the innumerable clocks—man-made and natural—that surround us is not time, but time’s effect on these objects. And what we are measuring is also not time, but the duration of these effects in relation to each other. Time itself is immeasurable, having no beginning or end. It stands above all relative effects, employing its various cakras to shape the physical world according to the Lord’s will.

But although we cannot observe time directly, we can learn much—with the help of the Vedic literature—by observing time’s effects. I have already mentioned time’s overall effect: destruction. Krsna says that as time He is “the great destroyer of the worlds.” And yet, as we can understand from the Vedic texts as well as from our own experience, time brings not only destruction but creation and sustenance as well.

Within every kala-cakra there is a point of creation, a point of sustenance, and a point of destruction. Everything has its given schedule of creation, sustenance, and destruction under the influence of time. The universe itself, according to the Srimad-Bhagavatam, is created at a certain time, sustained for the equivalent of 310 trillion solar years, and then destroyed. After destruction, time brings about recreation, and the cycle begins again. Thus, although the overall effect is destruction, the physical world goes through repeated creations and annihilations.

Within these cycles of creation and annihilation, time has many other manifestations. Time brings birth, death, old age, and disease—the fourfold miseries of material life mentioned in the Gita. It also brings on miseries caused by natural disasters like hurricanes, tornadoes, droughts, and so on, as well as miseries caused by the attacks of other living creatures, like insects or our human enemies.

All in all, therefore, time as we know it is a vehicle of suffering. It surrounds us, imprisons us, and gradually destroys everything we have. The pleasure we do experience is sure to have an end and sure to be mixed with suffering. This is like the pleasure of eating ice cream mixed with sand: the overall effect is misery.

The Supreme Lord in His form of time is not, however, directly responsible for our suffering, any more than a government is responsible for the suffering of the inmates in government prisons. To prevent criminals from creating disturbances and to convince them to reform themselves, the government locks them away. The government, however, creates not only prisons but also parks, schools, highways, and so on. The citizen decides whether he will enjoy freedom as a law-abiding individual or suffer as a prison inmate.

Similarly, those souls who do not want to serve Krsna or obey His laws are thrown into the physical world, where they are imprisoned in temporary bodies and are made to suffer under the law of karma. In the Vedic literatures the destructive, misery-laden nature of time is represented by the goddess Kali. Kala—the Supreme Lord as time—controls Kali, who inflicts various kinds of suffering on the inmates of this universe. Kali is the prison warden. She, and not God Himself, is directly in charge of punishing the inmates according to their particular criminal activities. Kali personifies the devastating cycle of creation, sustenance, and dissolution, and she wields the manifold miseries of material life. The effects of time as we can observe and experience them are Kali’s doing.

But even Kali is not to be blamed for our suffering. She is a pure devotee of the Supreme Personality of Godhead, Krsna, and her thankless duty is to remind the rebellious souls of the futility of trying to enjoy life without Him. Each of us is an eternal, fragmental part of Krsna, and as such our eternal, blissful function is to serve Him. Outside of Krsna’s service and association we wither and waste away, like leaves separated from a tree. In the Gita, therefore, Lord Krsna, with only our welfare in mind, requests us to surrender fully to Him. Kali, or material nature, is trying to convince us that to neglect this request is against our own best interest.

In the Bhagavad-gita Krsna explains that beyond the repeated creations and annihilations of this physical universe exists a transcendental world, which is eternal and is never destroyed. He also declares that those who surrender to Him can easily enter that transcendental world. Since Krsna is in charge of Kali, He can order her to release His surrendered servants. By ourselves we are helpless to escape Kali’s grip, but she readily obeys Krsna’s commands.

Krsna’s inconceivable time energy also exists in the transcendental world, hut Kali, time’s devastating feature, is absent there. Transcendental life, therefore, is not marred by repeated creation, sustenance, and annihilation. Instead, time only sustains, and therefore the residents of the transcendental world are free to eternally serve the Supreme Personality of Godhead, Krsna, without any hindrance. So, whereas Kali brings birth, death, and other suffering, time’s transcendental feature supplies Krsna and His devotees with unending and ever-increasing spiritual happiness.

That spiritual happiness is available, even in this temporary world, for anyone who takes up devotional service to Krsna. From the very start, a devotee begins to realize that he is not the body but is a pure spiritual soul situated within the body. He therefore tolerates the body’s inevitable decline, caring for his health only so that he can enthusiastically render service to Krsna. And as the devotee advances spiritually, the pleasures of devotional life make bodily miseries appear insignificant. Even death is of no consequence for the pure devotee, since at death he enters the transcendental world.

So, what is time? Time is a vehicle for suffering—or for unending happiness. The choice is ours. Either way, time is sure to always remain a source of perplexity, because it is an inconceivable energy of the Supreme Lord. Better to be perplexed by time’s unlimited potential to bring spiritual enjoyment, however, than by its power to destroy.