Back to Godhead > ISKCON > Temples > Krsna In The Heart Of Texas

Krsna In The Heart Of Texas

Krsna In The Heart Of Texas

From a place in Dallas to a farm
Near the Red River Valley, devotees are presenting
Krsna consciousness to the Lone Star State 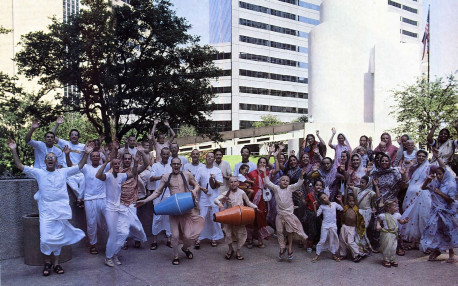 Thanksgiving Square in Dallas provides the setting for satikirtana, the congregation at chanting of Hare Krsna, which ISKCON is known for worldwide . 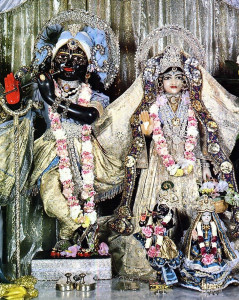 Sri Sri Radha-Kalachandji, preside over the community of devotees.

The Southwest Sun Belt region of the United States has become an area of rapidly expanding cities, prospering businesses, and low unemployment—a veritable golden land of opportunity. The city at the heart of all this good fortune is Dallas, Texas. And in that city is a temple that is drenching the area with a downpour of spiritual activities palatable to the affluent and the poor, the young and the old. This hub of Krsna conscious activity is known to most Texans as Kalachandji’s Restaurant and Palace, a four-star dining experience. Thousands have flocked there to see the palace of the magnificent Krsna Deity called Kalachandji, “the beautiful moon-faced one.” 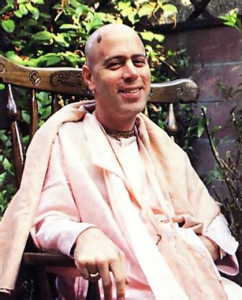 Many people make their first trip to the restaurant because of its reputation for fine food, but many return again and again because of the atmosphere. In the outdoor garden, the most popular dining area, guests sit nestled among fragrant flowers and plants. The centerpiece of the garden is a holly tree, encircled by a fountain set in the middle of a stone tile floor. Enclosing the garden are stucco walls. Their stained-glass windows glitter like gems as they filter the evening sunlight onto the booths. 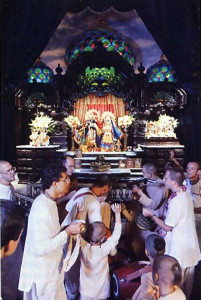 Devotees gather in the
temple each morning to chant and dance for the pleasure of the Deities.

The atmosphere reaches out to envelop you even as you enter the building. An elaborately costumed doorman wearing a jeweled turban and a decorative sword graciously sweeps open the door. A hostess wearing a beautiful sari greets you in the hallway and shows you to your table. The dinner has a standard number of courses, but the dishes change every night. A full-course meal includes a trip to the fifteen-item salad bar and a heaping basket of puris (whole-wheat puffed breads) and poppadams (delicate chiplike wafers made from bean flour). An appetizer follows and can vary from stuffed vegetable pastries to apricot mousse to smoked cheese with fruit and crackers. Then comes dal, a nutritious soup made from any one of a dozen exotic beans. The main plate consists of two subjis (vegetable preparations), pullao (a rice dish), savories, chutney, and several other gourmet speciality items. Topping off the meal is a choice of halava with fruit sauce (the speciality of the house), burfi (hot fudge), or sweet rice. Hot or cold tamarind tea is always available, and red or white sparkling juices are served by the glass or by the carafe. And though The Dallas Morning News recently rated Kalachandji’s one of the top ten restaurants in the city, the devotees aren’t satisfied and are still improving the menu. 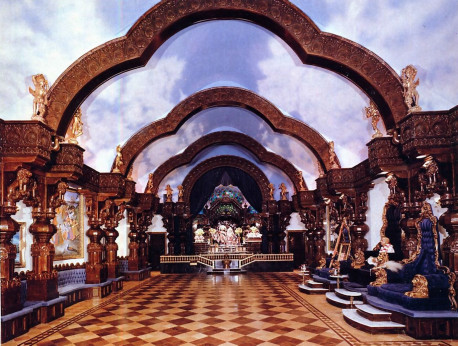 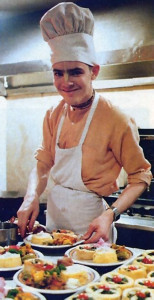 “The food we prepare in the restaurant,” explained Sunanda dasa, Kalachandji’s head chef, “is not just Indian cooking or natural food, which implies brown rice and sprouts. It’s a unique blend of American, European, and Indian vegetarian cuisine. Most importantly, it’s krsna-prasadam, or food that has been spiritualized by being offered first to God. Therefore it greatly benefits everyone who tastes it.

“Actually, since this restaurant is so successful,” Sunanda added, “it’s our biggest form of preaching. We’re giving people the chance to experience Krsna consciousness in so many ways.” 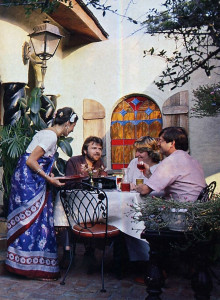 In the Karden of Kalachandji’s, diners enjoy friendly outdoor service.

The restaurant is open between 5:30 and 9:30 p.m. daily, except Monday, and each week as many as five hundred guests crowd the Palace. Ninety percent leave with two or three books about Krsna consciousness. By this method, as well as by keeping books on display in stores and yoga centers, the Dallas devotees distribute five thousand books each month, all free.

“We’re trying to find the best way to distribute our books and get the best results,” said Bhakta-rupa dasa, president of the Dallas center. “This way, because people take prasadam, see the Deity of Kalachandji, and get a book, all in one evening, they can relate to Krsna consciousness in a very comfortable way and thus appreciate the cultural heritage of our movement.” 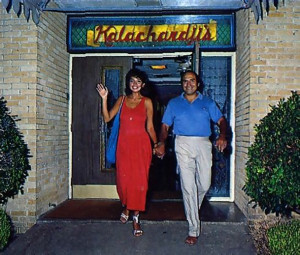 A satisfied couple heads home after a relaxed evening of dining and sightseeing.

The restaurant began from the inspiration of Srila Tamal Krishna Goswami Gurudeva, one of the present spiritual masters in the International Society for Krishna Consciousness and the director of ISKCON’s affairs in Texas and Oklahoma as well as in Fiji, the Orient, and the Philippines. On finding a magazine article featuring the best chefs in America, Srila Gurudeva decided it would be fitting for a Hare Krsna devotee to become an internationally known gourmet chef. Building a wonderful restaurant was the first step in the plan. In six weeks, fifteen devotees working day and night had built the garden restaurant. The restaurant combined with the already existing Palace to create a popular attraction. 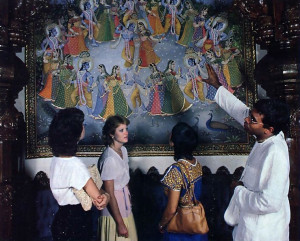 After dinner, many guests tour the Palace, where Ramasraddha dasa explains Lord Krsna’s pastimes as depicted in the Rajasthani silk paintings of B. G. Sharma.

After finishing a bountiful meal, most people join one of the groups touring the adjacent Palace. Styled after temples in India, the Palace was designed by Dutch architect Hans Keilman, also known as Surabhi Swami, the minister of architecture for ISKCON and architect for ISKCON temples in Bombay and Vrndavana, India. The result is a beautiful teakwood temple boasting thirty hand-crafted pillars that feature seventy-five carved lions and eight six-foot-square Rajasthani silk paintings by B. G. Sharma, one of India’s foremost artists. A flick of a switch bathes the airbrushed clouds billowing across the sky-blue ceiling with the pink tinge of sunset. 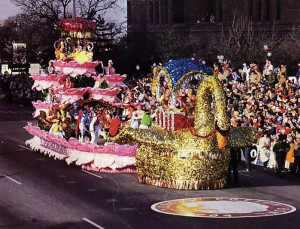 Representing the most festive religious movement in the world, the ISKCON float won the Judges’ Award for Special Merit at the 1984 Cotton Bowl Parade.

The altar, where the Deities of Lord Kalachandji and His eternal consort. Srimati Radharani, stand, is made of teakwood, marble, and bright stained-glass with a peacock-motif canopy. Water bubbles pleasantly from two gilded lotus-flower fountains standing before the altar.

Maha-buddhi dasa. ISKCON’s minister of tourism, predicted, “We foresee that with the development of our Dallas community, it may, in the Southwest, reach the level of popularity of Prabhupada’s Palace of Gold in West Virginia.” 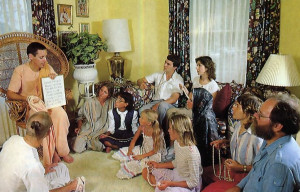 In addition to maintaining the successful restaurant and the beautiful palace, the devotees have rejuvenated the East Dallas neighborhood surrounding the temple, an effort several newspapers have applauded. The twenty homes owned by devotees have been completely renovated, improving the appearance of the area immensely. Adjoining the restaurant complex, a two-acre park with its dozens of cultivated pecan trees adds to the beauty of the neighborhood. The city council has also praised the temple’s efforts, and the local chamber of commerce, which Kalachandji’s is a member of, works closely with the temple on many of its projects, including its latest plans to turn a historic sanctuary next door to the temple into a cultural center and museum. 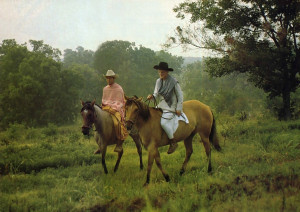 Under Srila Gurudeva’s direction, the devotees have made giant steps in inter-faith relations in Dallas. Devotees were chosen to be the representatives of Hinduism at the 1984 National Day of Prayer celebrations held in Dallas, and they have also been invited to aid city officials in planning the religious aspects of the festivities celebrating the 150th anniversary of Texas statehood. The temple has also become involved in an established Dallas tradition by entering a float in the 1984 Cotton Bowl Parade. The float, a pink lotus flower pulled by a giant golden swan, captured the Judges’ Prize for Special Merit, and millions viewed the float on national television. 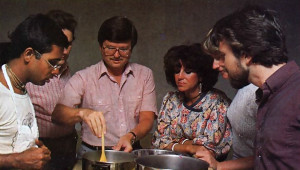 Ramasraddha dasa (in apron) holds weekly classes to teach the art of cooking for Krsna.

The Food for Life program has brought even more praise. Five days a week at least one hundred people, most of them children, are fed a complete free dinner. Located in the heart of the “Little Asia” section of Dallas, the Food for Life center also houses a job opportunity office and will soon include a family medical facility.

Radhanatha dasa, one of the coordinators, explained: “We met with city officials, and they liked our food relief program more than some of the other programs in the city, because we’re reaching out to the poor people who are established in Dallas—the families. Everyone seems interested in helping the transients, but no one is helping the poor people who are struggling to lift themselves up.” But that is just what the Dallas temple is doing, and because everything served is krsna-prasadam, the recipients have not only their hunger but also their spiritual cravings satisfied. 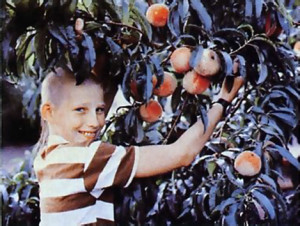 In addition to all of this, the devotees maintain a 1,400-acre farm in southeast Oklahoma. It serves as a retreat for devotees and guests, a summer camp for children, and a community farm project. Forest covers about five hundred acres of the farm, and six hundred acres are used for growing pecans, apples, peaches, pears, apricots, plums, cherries, wheat, dal beans, peanuts, rice, sorgum, alfalfa, soybeans, cotton, and other crops. The property includes several multi-acre lakes and grazing land for horses. The remaining acreage is earmarked for housing and buildings. 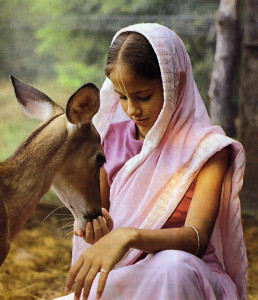 Although one hundred full-time devotees reside in Dallas, attend the temple functions, and adhere strictly to the four regulative principles of devotional life in Krsna consciousness—no meat-eating, no gambling, no intoxication, and no illicit sex—an additional two hundred congregational members accept Krsna consciousness as their religion and put its philosophy into practice in their daily lives. Many of them participate in a program called Friends of Lord Krishna, which offers instruction on chanting the Hare Krsna mantra, vegetarian cooking, and other topics. In addition, five thousand Dallas residents of Indian descent visit the temple regularly and attend the major celebrations throughout the year. 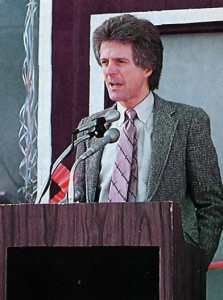 So the long tradition of worshiping Lord Krsna is flourishing in Dallas. Not only are the devotees worshiping Him in His Palace, but they are also serving Him through community development, farming, feeding the poor, and introducing Dallasites to the joys of Krsna consciousness and krsna-prasadam.

Said Srila Tamal Krishna Goswami: “Our Dallas community offers people an opportunity to seek Krsna consciousness in many variegated ways. Texans like to be first class in all that they do. We feel confident that our community will meet their highest expectations.”