A Temple on the New York Sidewalks 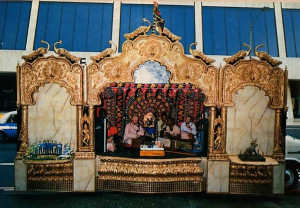 An Indian-style temple at the foot of a Manhattan skyscraper? Not for long. Aindra dasa’s van, transformed into an ornate temple, appears at different places in New York City every day. To the accompaniment of instruments, Aindra and his group chant the holy name of Krsna, distribute hooks on Krsna consciousness, and offer free refreshments to passersby.

Philadelphia, Pennsylvania—Two books written by senior members of ISKCON recently received favorable reviews. The September issue of Choice magazine carried the following review of Prabhupada, the abridgment of the six-volume biography of His Divine Grace A.C. Bhaktivedanta Swami Prabhupada, the founder-acarya of ISKCON. Srila Satsvarupa dasa Goswami, one of the present spiritual masters in the Hare Krsna movement, wrote Prabhupada.

The review said. “This biography of the founder of the International Society for Krishna Consciousness (the ‘Hare Krishna’ movement) belongs in all academic and public libraries. It is a very satisfactory abridgment of the multivolume ‘authorized’ biography of A.C. Bhaktivedanta Swami Prabhupada, from the same publisher, that is appearing under the title Srila Prabhupada-lilamrta (1980-83). The author . . . writes with both sympathy and balance, and even in this abridged form there is a rich attention to detail, plus engaging excerpts from interviews with both ‘insiders’ and ‘outsiders.’ This volume should be paired with the essays in Steven Gelberg’s Hare Krishna, Hare Krishna (Grove Press, 1983). Together they provide a remarkably comprehensive account, accessible to all levels of readership, of one of the important religious movements in and between contemporary America and India. . . . Highly recommended.”

The review said, “[These] interviews show skeptics that the Hare Krishna movement is not the odd aberration it may appear to be but has roots in Indian tradition and should also have a place in America’s own multicultural soil. The dialogues are intelligent, well edited, and make for interesting reading. Moreover, the publication of the book is a significant event in itself. It marks a new phase in the movement’s efforts to routinize itself and find an acceptable niche in the global terrain of religious culture.”