Traveling and Preaching with Radha Damodara

LET US OFFER OUR PROSTRATED OBEISANCES unto the lotus feet of our spiritual master, His Divine Grace A.C. Bhaktivedanta Swami Prabhupada, whose words and loving merciful actions have inspired us, and thousands like us, to spread this divine movement, Krishna consciousness, throughout the world, in every town and village.

There are unlimited ways to serve Krishna, but all of them contribute to the chanting of His glories. From the very beginning, after we joined the Krishna consciousness movement in 1968, we were attracted to traveling and preaching, and by Srila Prabhupada’s grace we were allowed to assist in opening temples in cities all along the West Coast of the United States. We have both taken the vow of the renounced order of life, called sannyasa, firmly committing ourselves to live as traveling celibate preachers. We have both traveled extensively, preaching chanting and distributing prasada (delicious spiritual food), and have opened Krishna consciousness centers in the United States, Europe and India. 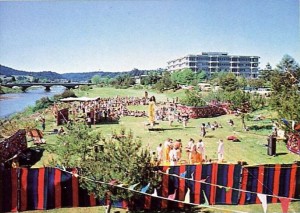 Since June of 1973, we have taken the Supreme Lord Himself (in His Deity form called Radha-Damodara) all over the United States. Along with ten other devotees, we bring the Lord to colleges, fairs and any large festive gathering. There we set up tents and spread Krishna consciousness by chanting Hare Krishna, accompanied by ancient instruments, distributing prasada, preaching individually to interested people, and distributing books by our spiritual master. Lord Caitanya Mahaprabhu, who is Krishna Himself in the role of a devotee, first expounded this glorious program for self-realization: dancing and chanting Hare Krishna to the accompaniment of mrdanga (drum) and karatalas (cymbals), feasting on delicious food first offered to the Lord, and hearing the philosophy of God realization. 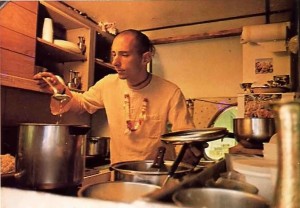 Visnujana Svami cooking for Krishna in the kitchen of the traveling party’s bus. The customized Greyhound bus has everything needed for a mobile Krishna conscious temple.

Formerly, in the ancient Vedic culture, a sannyasi! was required to go alone into the forest and perform severe austerities. In this age, however, Lord Caitanya has directed that a sannyasi simply stop mundane social intercourse and devote his life exclusively to the service of the Lord. Lord Caitanya Himself traveled widely throughout India, enlightening even tigers and bears. We cannot inspire animals to chant, but we can give human beings the chance to perfect their lives through this simple yet deep and sublime process of chanting Hare Krishna, Hare Krishna, Krishna Krishna, Hare Hare/ Hare Rama, Hare Rama, Rama Rama, Hare Hare. 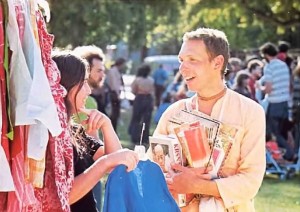 Books are the basis and preaching is the essence of the Krishna consciousness movement.

For ten monks, serving the Supreme Lord as He tours the continent is full of unlimited bliss. We perform ceremonies of worship six times a day, even while moving sixty miles an hour over the continental divide. In a compact kitchen that turns out prasada for hundreds, we cook all varieties of delicious vegetarian food for the Lord. We study daily the sacred teachings of bhakti-yoga given to us by Srila Prabhupada, and we are always prepared for the order of our spiritual master, who can send us anywhere to glorify the Supreme Lord and defeat atheistic propaganda.

Everywhere we hold our sacred Krishna conscious festivals, people become convinced of the Krishna conscious way of life. They become inspired to join us in this divine mission of traveling and preaching, and so in only a few months we have started the same program with a second bus. And soon, by Krishna’s desire, we hope to see hundreds of buses bringing these blissful festivals to every town and village.

His Holiness Visnujana Svami joined the Krishna consciousness movement in San Francisco in 1968. He accepted the renounced order in 1970, and since then he has been traveling, holding festivals and opening Krishna conscious centers throughout the United States.

His Holiness Tamal Krishna Gosvami, one of ISKCON’s Governing Body Commissioners, also joined Krishna consciousness in 1968. He accepted sannyasa in 1972 in Jaipur, India. He served as President of ISKCON’s Los Angeles center and was then sent overseas to help initiate ISKCON’s preaching programs in Europe. For the last five years he has been Srila Prabhupada’s secretary for India. He has recently returned to the United States for increased preaching.

3 Responses to Traveling and Preaching with Radha Damodara