Back to Godhead > ISKCON > Temples > In a Castle in Germany, And Around the World…

In a Castle in Germany, And Around the World… 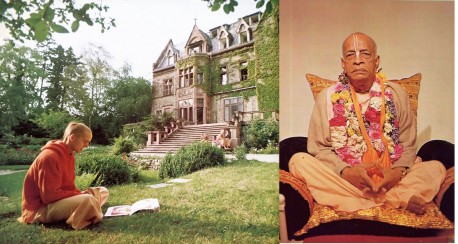 This castle is our Society’s headquarters for West Germany. Built in 1890 for a German royal family, it’s called Schloss Rettershof, (“the castle of the knights”). Now it’s one of the more than eighty worldwide centers of the International Society for Krishna Consciousness.

The purpose of the Society is to teach a simple, practical and scientific way that we can reawaken the natural spiritual awareness that’s present within us all. Whether one is American, German or English, Christian, Buddhist, Hindu or Jew, black or white or whatever, everyone is really a spiritual living being. On the spiritual platform, bodily labels don’t make any difference. Spiritually, everyone is equal because everyone is a tiny part of the same supreme reality. That supreme reality is the Supreme Personality of Godhead—God, or Krishna.

Krishna is a universal name for God because Krishna means all attractive.” After all, who could be more attractive than God? Rama is also a name for God, and it means ‘”the highest eternal pleasure.” Hare is a call for God’s blissful spiritual energy. These three names—Hare, Krishna and Rama—are the seeds of the Hare Krishna mantra, or Chant. By chanting these spiritual names of God, one comes directly to the spiritual platform, which is blissful, eternal and full of knowledge.

Almost 100 Krishna conscious devotees live at Schloss Rettershof, and they travel in 16 new Volkswagen buses to cities, villages and towns throughout Germany, just to spread the chanting of Hare Krishna, tell people about Krishna consciousness and distribute books that explain the Krishna conscious philosophy. This is the philosophy that you’ll find in Back to Godhead. Read on, and find out more about it.