Back to Godhead > Society > Religion > Religion – Material and Spiritual 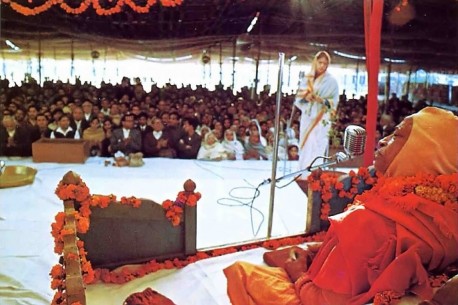 In 1971 Srila Prabhupada lectured at a series of Krishna conscious festivals held in a huge pandal, or exhibition tent, in downtown Delhi, India. This is one lecture from that series.

According to our Vedic system, there are two kinds of religion. First we must try to understand what religion is. Religion refers to our constitutional position. Religion is different from faith. A faith can be changed. One may be a Christian or a Mohammedan or Hindu, but according to the Vedic system, religion cannot be changed. Religion is dharma, the constitutional position of the living entity It is to the living entity what sweetness is to sugar or heat is to fire. Everything has some essential characteristic, and the essential characteristic of the living entity is his eternal religion, sanatana-dharma.

As stated in Srimad-Bhagavatam, Sixth Canto, dharmam tu saksad-bhagavat-pranitam: the principles of religion are directly enunciated by the Lord. In the beginning of Bhagavad-gita Lord Krishna uses the word dharma in this way:

“Whenever and wherever there is a decline in religious practice, O descendant of Bharata, and a predominant rise of irreligion—at that time I descend Myself.” (Bg. 4.7)

In the conclusion of Bhagavad-gita Sri Krishna says:

“Abandon all varieties of religion and just surrender unto Me. I shall deliver you from all sinful reaction. Do not fear.” (Bg. 18.66)

If the Supreme Personality of Godhead appears on this planet to establish dharma (dharma-samsthapanarthaya), then why does He say abandon all dharma (sarva-dharman parityajya)? This means that but for surrender unto the lotus feet of Krishna, whatever is going under the name of dharma is not actually dharma. Dharma does not mean going to the church for some ulterior motive, for some money or sense gratification. Generally people cultivate dharma, artha, kama, moksa—religion, economic development, sense gratification and liberation. But one should not take to religion simply to make more money. That is not pure devotion. Pure devotion is described in this way:

In this verse Srila Rupa Gosvami clearly states that if one wants to execute unalloyed devotional service, he must be freed from all kinds of material contamination. One should not have any ulterior motive in approaching God but should approach God only out of love. This is the teaching of Caitanya Mahaprabhu:

“I do not know anyone except Krishna as my Lord, and He will always remain as such, even if He handles me roughly by His embrace or makes me brokenhearted by not being present before me. He is completely free to do anything and everything, but He is always my worshipable Lord, unconditionally.” (Siksastaka 8)

This is the attitude of a pure devotee. His exchange with God is not like the exchange between one merchant and another. He does not want anything of God except God’s pure devotional service. The jnanis are desirous of liberation. They want to merge with the Supreme, and to this end they undergo austerities. They are serious, but they desire to become one with God. The yogis also undergo severe penances in the mystic yoga system, but they desire mystic powers. The karmis are also full of desires for sense gratification. Everyone has some demand, therefore, but the bhakta, the devotee, is different. There is no desire for the bhakta other than serving Krishna. As stated by Caitanya Mahaprabhu:

“O almighty Lord! I have no desire to accumulate wealth, nor have I any desire to enjoy beautiful women, nor do I want any number of followers. What I want only is that I may have Your causeless devotional service in my life—birth after birth.” (Siksastaka 4)

Thus Caitanya Mahaprabhu rejects even liberation. This is the state called akama. This means devoid of desire for material things. In the Caitanya-caritamrta there is a verse that reads: Krishna-bhakta—niskama, ataeva ‘santa’/ bhukti-mukti-siddhi-kami—sakali ‘asanta’. There are many planets for those who worship the demigods, and in the higher planetary system the program for sensual enjoyment is much better than on other planets. Just as on this planet the American standard of living is far greater than that of other countries, in other planets the standard of living is far greater than on this earth. The inhabitants live many thousands of years. In Bhagavad-gita it is stated that Brahma’s duration of life is very long indeed.

Although this may be the case, Krishna states:

“From the highest planet in the material world down to the lowest, all are places of misery wherein repeated birth and death take place. But one who attains to My abode, O son of Kunti, never takes birth again.” (Bg. 8.16)

So even if one goes to the higher planets like Brahmaloka, he will have to come back again. However, Krishna says that if one comes to Him, back to Godhead, then he does not have to return to the material world. The living entities within the material world are always full of anxiety and fear because their position is nonpermanent. A devotee, however, is not afraid of this material world. He simply wants one thing—wherever he is he wants to be able to chant Hare Krishna, Hare Krishna, Krishna Krishna, Hare Hare/ Hare Rama, Hare Rama, Rama Rama, Hare Hare. That is the aim of the devotee.

Just as there are two natures—material and spiritual nature—so there are two kinds of dharma, or religion: material dharma and spiritual dharma. This Krishna consciousness movement is meant for development of spiritual dharma. Material dharma consists of religiosity, economic development, sense gratification and liberation, but spiritual dharma is jivasya tattva-jijnasa nartho yas ceha karmabhih. This means that one should try to understand Krishna, the Absolute Truth. This dharma is eternal dharma because Krishna is eternal and we are also eternal. In the Eleventh and Fifteenth Chapters of Bhagavad-gita, Krishna is described as sanatana, eternal, and in the Eighth Chapter His spiritual world is also described as sanatana. Sanatana-dharma refers to the eternal engagement of the living entity in the service of the Supreme Eternal. Nityo nityanam cetanas cetananam: Krishna is the Supreme Eternal, the Supreme Living Being, the Supreme Lord, and the Supreme Dharma. Our troubles in this material world result from our attempt to become one with the Supreme. To gain relief from this suffering, we are instructed in this way:

“Abandon all varieties of religion and just surrender unto Me. I shall deliver you from all sinful reaction. Do not fear.”(Bg. 18.66)

We need only understand this last teaching of Lord Krishna. That is called saranagati, surrender. That is the ultimate goal of bhakti. Those who are engaged in mental speculation will take a long time to come to this point. The real mahatmas, great souls, fully engage in devotional service.

“O son of Prtha, those who are not deluded, the great souls, are under the protection of the divine nature. They are fully engaged in devotional service because they know Me as the Supreme Personality of Godhead, original and inexhaustible.” (Bg. 9.13)

We accept the ultimate dharma as surrender unto Krishna. This surrendering process is meant not for less intelligent people, but for the most intelligent because Krishna says that after many births one who is actually in knowledge surrenders unto Him, knowing Him to be the cause of all causes and all that is. (Bg. 7.19). If this is the ultimate goal of life, then why not surrender immediately? Why should we wait any longer? This is the process of this Krishna consciousness movement.

2 Responses to Religion – Material and Spiritual