by Sri Satyavrata Muni
translated by His Holiness Acyutananda Svami

When Lord Krishna, the Supreme Personality of Godhead, appears on earth, He performs extraordinary pastimes as a transcendental cowherd boy. As a child, Lord Krishna lived with His pure devotees in the village of Vrndavana, or Gokula. In the spiritual world (Vaikuntha) the Lord, in His form called Narayana, is worshiped with great awe and reverence, but the devotees in Vrndavana have such great love for the Lord that they even forget that He is the Lord. Because of their intense love for Him, they think of Him as their friend, son or lover. And the Lord, to please His devotees, responds in the roles in which the devotees think of Him.

As a transcendental pastime, Lord Krishna used to steal butter from the gopis, the ladies of Vrndavana. Once, however, His mother caught Him, bound His waist with a rope, and tied Him to a grinding mortar to punish Him. The Lord is therefore also known as Damodara (dama means “rope,” and udara means “waist”).

In Lord Krishna’s courtyard were two trees, who were actually sons of the demigod Kuvera but had been cursed to stand as trees. By His mercy, Lord Krishna crawled between these trees, dragging the heavy mortar behind Him, and pulled the trees down, thus liberating Kuvera’s two sons. The details of these pastimes are described in Srila Prabhupada’s book entitled Krishna, the Supreme Personality of Godhead. 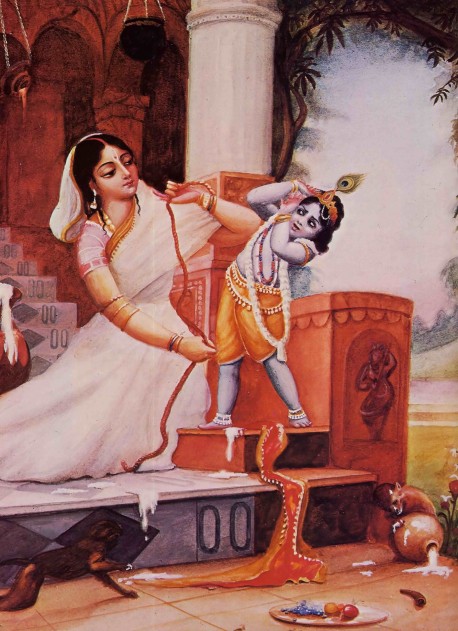 The eight-verse prayer on the following page is chanted daily by devotees during the Krishna conscious month of Damodara. This year, the month of Damodara begins on Nov. 1 and continues through Nov. 29.

To the supreme controller who possesses an eternal form of blissful knowledge, whose glistening earrings swing to and fro, who manifested Himself in Gokula, who stole the butter that the gopis kept hanging from the rafters of their storerooms and who then quickly jumped up and ran in retreat in fear of Mother Yasoda but was ultimately caught—to that Supreme Lord, Sri Damodara, I offer my humble obeisances.

Upon seeing His mother’s whipping stick, He cried and rubbed His eyes again and again with His two lotus hands. His eyes were fearful and His breathing quick, and as Mother Yasoda bound His belly with ropes, He shivered in fright and His pearl necklace shook. To this Supreme Lord, Sri Damodara, who is bound with His devotee’s love, I offer my humble obeisances.

Those superexcellent pastimes of Lord Krishna’s babyhood drowned the inhabitants of Gokula in pools of ecstasy. To the devotees who are attracted only to His majestic aspect of Narayana in Vaikuntha, the Lord herein reveals: “I am conquered and overwhelmed by pure loving devotion.” To the Supreme Lord Damodara, my obeisances hundreds and hundreds of times.

O Lord, although You are able to give all kinds of benedictions, I do not pray to You for liberation, nor eternal life in Vaikuntha, nor any other boon. My only prayer is that Your childhood pastimes may constantly appear in my mind. O Lord, I do not even want to know Your feature of Paramatma. I simply wish that Your childhood pastimes may ever be enacted in my heart.

O Lord, the cheeks of Your blackish lotus face, which is encircled by locks of curling hair, have become reddened like bimba fruit due to Mother Yasoda’s kisses. What more can I describe than this? Millions of opulences are of no use to me, but may this vision constantly remain in my mind.

O unlimited Visnu! O master! O Lord! Be pleased upon me! I am drowning in an ocean of sorrow and am almost like a dead man. Please shower the rain of mercy on me; uplift me and protect me with Your nectarean vision.

O Lord Damodara, in Your form as a baby Mother Yasoda bound You to a grinding stone with a rope for tying cows. You then freed the sons of Kuvera, Manigriva and Nalakuvara, who were cursed to stand as trees, and You gave them the chance to become Your devotees. Please bless me in this same way. I have no desire for liberation into Your effulgence.

O Lord, the entire universe was created by Lord Brahma, who was born from Your abdomen, which was bound with a rope by Mother Yasoda. To this rope I offer my humble obeisances. I offer my obeisances to Your most beloved Srimati Radharani and to Your unlimited pastimes.