Back to Godhead > ~Featured~ > Krishna The Transcendence Comes Into View

Krishna The Transcendence Comes Into View

“Our dear Lord, You have appeared in Your original unalloyed form, the eternal form of goodness, for the welfare of all living entities within this material world. Taking advantage of Your appearance, all of them can now very easily understand the nature and form of the Supreme Personality of Godhead:”
—Srimad-Bhagavatam, Tenth Canto, Chapter Two 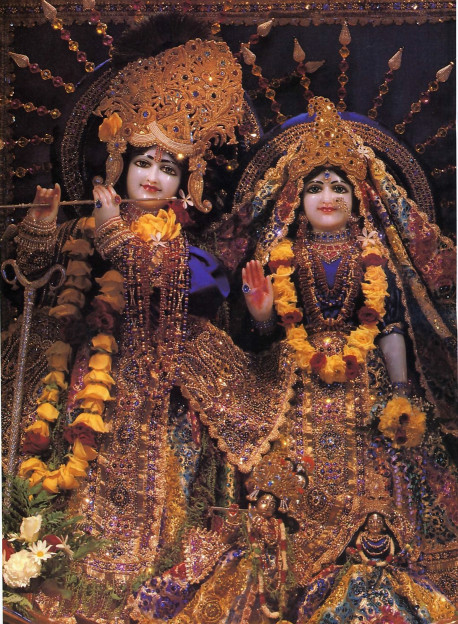 The unlimited, if He is truly unlimited, car reveal Himself (as He does even now, along with
His eternal con sort, at the Krsna temple in LosAngeles).

The Supreme Lord is not formless or impersonal. When we speak of Krsna, we speak of the Supreme Personality of Godhead. What this means, essentially, is that the Godhead, the Supreme Truth, the source of everything, is ultimately the supreme individual person. According to the Vedic literatures, God has three features. First, He has His all-pervading, impersonal aspect. In this feature, He is the great light from which everything shines forth, the great primordial truth from which all other truths arise. Beyond this, however, He also has His aspect of Paramatma, the supreme knower who lives within the heart of everyone and gives everyone knowledge, memory, or forgetfulness. And ultimately God also has an independent personal aspect, His original eternal form of bliss and knowledge.

In this personal aspect, the Lord has not only a form but also a name, an abode, personal qualities, an eternal entourage, and spiritual activities. 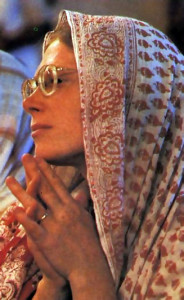 But the unlimited, if He is truly unlimited, can reveal Himself and His unlimited nature, even in this material world. This is the purpose of Krsna’s appearance. As Bhagavad-gita explains, Krsna appears in this world from time to time (to favor His devotees, subdue the ungodly, and reestablish universal religious principles for the benefit of all living beings).

So although Krsna is the supreme absolute, the ultimate existence, the Supreme Lord of all creation, He also appears within this mundane world as a visible, historical person. When He does so, He enlightens us by showing us His eternal nature and His eternal transcendental form.

Janmastami is what could be called Krsna’s birthday. But it’s not called that, because Krsna never takes birth like an ordinary man. An ordinary man takes birth in this world because he is forced to by the laws of nature. But Krsna’s “birth” is a transcendental drama staged by the Lord Himself. In this drama, the Lord allows certain exalted devotees to play the roles of His father and mother, and others appear as His friends and other associates.

From the very beginning, Krsna’s activities on earth were extraordinary. At the time of His so-called birth, He appeared before His parents as the majestic four-armed Lord Narayana. While still a child on his mother’s lap, He slew the great demon Putana. Throughout His 125 years on earth, Krsna performed wonderful superhuman activities. He exhibited the unlimited strength, beauty, wealth, fame, knowledge, and renunciation of the Supreme Personality of Godhead. In particular, He imparted sublime spiritual knowledge to His friend and devotee Arjuna, knowledge that endures in the sacred text Bhagavad-gita.

According to Bhagavad-gita, we can achieve freedom from the pangs of material suffering and return to the kingdom of God simply by understanding the transcendental birth and activities Lord Krsna enacts when He appears in this material world.

Krsna in Paris … With His eternal consort Radha

Yet, the Gita goes on to say, hardly anyone knows God as He is. In the absence of a clear understanding, we describe God negatively, in terms of what He is not, or in terms vague, enigmatic, and intangible. But when God personally descends to earth. He reveals His eternal form and His eternal transcendental qualities.

But even though God personally appears, one cannot understand Him merely by blunt materialistic vision. Even when Krsna was present, less intelligent men, unable to appreciate His transcendental superexcellence, thought Him an ordinary person of this material world. Similarly, unintelligent men in the present age think Krsna nothing more than a mythological hero. Yet great saints and sages throughout history have consistently accepted Lord Krsna as the Supreme Godhead. The sage Vyasadeva was the compiler of the Vedic literature and the author of Vedanta-sutra, perhaps the most demandingly logical treatise on spiritual inquiry ever written. Yet after completing Vedanta-sutra Vyasadeva felt that his life’s work would be incomplete if he failed to write one book devoted exclusively to describing the transcendental form, qualities, and pastimes of Lord Krsna. Would such a sage have suddenly abandoned his rigorous pursuit of truth to indulge in spinning whimsical mythological tales? 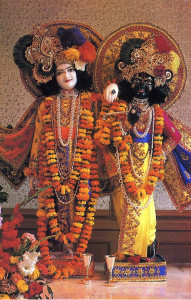 Krsna and His brother
Balarama, Krsna serves notice to
all that He isn’t vague or enigmatic or intangible.

Lord Krsna is neither mundane nor mythological, but one can understand Him only by pure devotion. Indeed, this is the central theme of Bhagavad-gita, for this is the supreme principle of religion that Lord Krsna appears in this world to teach: that one should abandon all other forms of religion and simply surrender to Him in devotion. Pure devotion to God, pure love for God, is the ultimate goal of all religious principles.

From a historical point of view, Krsna appeared within this material world for 125 years and then left. But from a broader philosophical viewpoint we can understand that Krsna is always present everywhere, although sometimes He is visible and sometimes not. 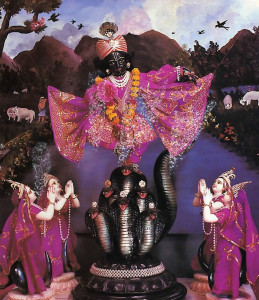 When Krsna descended on earth five thousand years ago, He briefly made Himself visible to all. And from the Vedic literature it is understood that those whose eyes have been anointed with the ointment of pure devotion can see Lord Krsna in their hearts perpetually. Such exalted souls, however, are very rare.

How then are the rest of us to know God and develop our love for Him’? The Vedic authorities have conclusively decided that in the present age the most effective means for developing our love for God is to chant His holy names, especially as found in the Hare Krsna mantra—Hare Krsna, Hare Krsna, Krsna Krsna, Hare Hare/ Hare Rama, Hare Rama, Rama Rama, Hare Hare. Because God is absolute, there is no difference between God and God’s name. So when we chant the holy name of the Lord, the Lord Himself is dancing on our tongue. As we continue to chant—sincerely, we associate directly with the Lord, and thus we advance in spiritual life. 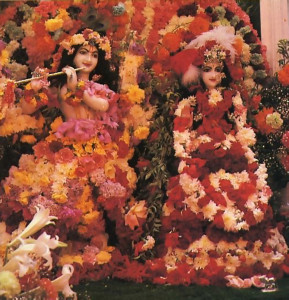 Just as there is no difference between the Lord and His holy name, so also we cannot separate Krsna from His transcendental form. When Krsna’s form is present. Krsna Himself is present. The Vedic scriptures therefore recommend that one worship Krsna’s murti, His transcendental form in the temple. Although the murti appears to mundane eyes to be a mere statue, to the eyes of a pure devotee He appears as Krsna Himself. Of course, metal and stone and wood are material elements, but Krsna is present in these elements, for He is present everywhere. And when these elements are molded into Krsna’s form, the same Krsna who was present all along becomes visible to our eyes. 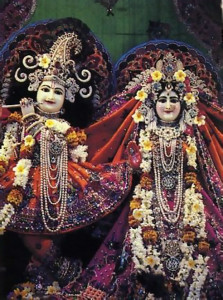 The pictures on these pages, therefore, are pictures of Krsna, the Supreme Personality of Godhead, who appears in this world for our benefit. And if we devote ourselves to Krsna and chant Lord Krsna’s holy name, under the direction of a bona fide spiritual master, our consciousness will be purified, and we will be able to perceive Krsna’s presence directly—while chanting Hare Krsna, while seeing the form of Krsna, and ultimately at every moment.