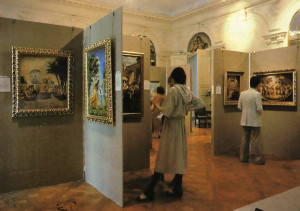 “Canvases full of freshness and sensitivity” was the consensus among guests.

New York—Recently gallery owners and art agents, writers, and publishers converged on the Indian consulate for the first exhibit of the Bhaktivedanta Trust Collection of paintings, photos, and sculpture.

Attracting the most attention on opening night was Yadurani -devi dasi’s Bad Karma, a canvas that shows human beings degrading themselves toward future lives as animals or plants. (For instance, someone is stuffing his face and transforming it into that of a pig.)

Notable as well was a life-size diorama called Changing Bodies. The piece shows the inner, spiritual self remaining unchanged as the outer, material body passes through the stages of infancy, childhood, youth, adulthood, old age, death, and rebirth. 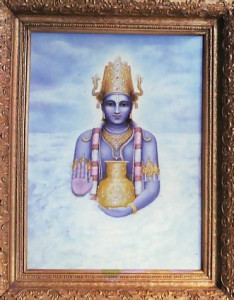 Also on view was a photographic collection by Bhargava dasa, of BACK TO GODHEAD. The product of four years in the field, the collection pointed up the treasures of India’s spiritual culture, specifically her many Krsna temples. Additionally, guests watched showings of Vrndavana: The Land of Krsna, a feature film by Yadubara dasa, that had just placed as a finalist at the New York Film Festival.

The eminent Indian artist Sri S.N. Swamy made this assessment of the paintings of the Bhaktivedanta Trust Collection:

“In my opinion, the young artists of the Trust are exceeding our own best Indian artists in their mastery of painting. Their canvases are full of freshness and sensitivity. Spatially, the paintings are excellently conceived and executed, and when it is required, they are full of dynamic movement. As devotees of Krsna, these artists are able to use their talents, creativity, and devotion in such a way as to inspire similar feelings of devotion in whoever views their work. This surely is the proper role of the artist in society.

“I am certain that this new and vital school of painting will reaffirm the highest ideals of great art at a time when art, being influenced by materialism, has largely been reduced to varieties of senseless abstraction. These works of art must surely spark a great revival in realistic and God conscious art throughout the world.”

At the end of the exhibit’s one-week run, Consul General K. Srinivasan requested the organizer, Kirtika-devi dasi of the Neo-Vedic Arts Association, to extend it for an additional week.