We Love Prabhupada Because He Has Seen the Truth

From Bhagavad-gita As It Is:

“Just try to learn the truth by approachinga spiritual master.
Inquire from him submissively andrender service unto him.
The self-realized soul can impart knowledge unto you …

An appreciation by Brahmananda Swami 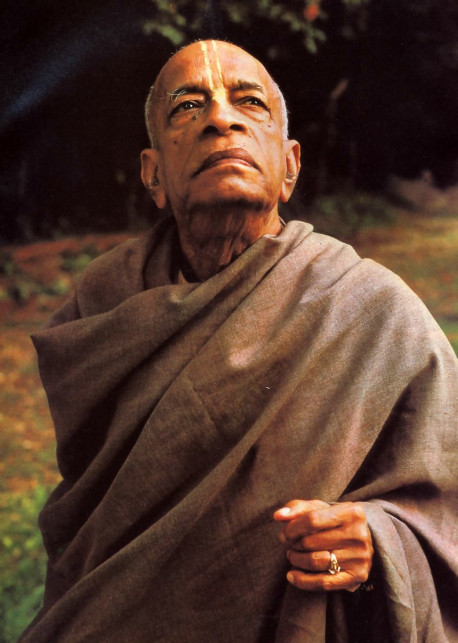 Sometimes we consider the spiritual master more merciful than God Himself, because he so kindly comes to this world of countless inconveniences and problems. He comes just to preach the glories of God, a mission that in this “God-is-dead” age is not without its risks and tribulations. Of course, in deferring to his spiritual master, the disciple does not minimize the importance of God. Rather, he is always thankful to Lord Krsna for mercifully sending His selfless representative with the message of Godhead, and he is ever thankful to Krsna that he himself has had the good fortune to meet his spiritual master, to surrender to him, and to enter into the blissful association of Krsna conscious souls.

Furthermore, the body that our physical mother and father give us is subject to birth, disease, old age, and death. Thus they have given us a situation that is fraught with difficulties and problems. But the spiritual father and spiritual mother relieve these fourfold miseries. The spiritual master teaches the disciple how to get out of bodily existence, so that this material body will be his last.

Liberation is the real goal of human life and is what the human body is meant for. We can see that the human body is not meant for sense gratification, because the animal body is much better suited for this. Animals can variously eat all day without stopping or sleep for six months or have sex several times an hour, and they carry their own bodily facilities for instant fighting and defense. The human body alone has a developed consciousness, manifested by philosophical introspection and religious inclination. Although a human being can’t do everything an animal can do, he alone has philosophy and religion. So successful human life means developing our God consciousness. And it is the spiritual master who gives us this God consciousness; it is he who makes us into human beings.

His Divine Grace A.C. Bhaktivedanta Swami Prabhupada, the founder-acarya of the International Society for Krishna Consciousness, has done more than anyone else in the world, at least since the time of his own spiritual master, to awaken within all people pure devotion to the Personality of Godhead, Lord Sri Krsna. Srila Prabhupada’s mission goes beyond that of a religious worker who opens a home for unwed mothers or a svami who opens an eye clinic or a priest or minister who holds a high post in a church.

There is a great difference between the transcendental self-knowledge taught by Srila Prabhupada and the pious formularies spoken by the world’s religious dignitaries. Generally, the highest principle we hear of is love of our fellow man. But sublime as it may sound, this philosophy is not effective—because as long as we see others on the gross bodily platform, we cannot completely love them. Why? Because others’ bodily designations will prove either attractive or repulsive. Black, white, young, old, healthy, sick, rich, poor, male, female, child, adult … sad to say, most religious representatives convey the false notion that we are our bodies. “You are Christian” means that you are a Christian body, and “You are Jewish” means that you are a Jewish body. And so, because of the influence of the false ego it becomes difficult, if not impossible to love people with bodies different from our own. Bodily designations mean there must be some distinction, some preference, even some value judgment—and finally some aversion.

But Krsna consciousness means to identify all living entities as spirit souls, distinct from the body, which is just an outer covering like a shirt or coat. The person is the soul, not the body. Despite bodily differences, as spirit souls we are all equal. And further, we are all equal emanations from the one same Supreme Lord. Our common identity is based on our common Lord, and therefore a Krsna conscious person sees himself and others spiritually, in relation to God. Since God is our father, we are His inseparable sons, and therefore we are all brothers. The natural result of such consciousness is brotherhood, but this brotherhood can come about only because of the fatherhood of God. In a natural way Krsna consciousness brings us to love humanity: one who loves the father will easily come to love the brother.

If we water the root of a tree, then we automatically water all the branches and buds. But if we try to water each and every bud separately, that will make the whole tree dry up and die. Sentimental humanism—mere love for fellow man—doesn’t work, but Godism, Krsna-ism, Krsna consciousness, does. This is what Srila Prabhupada taught—how to water the root of the universal tree.

Srila Prabhupada often exposed so-called humanism as deficient in another way. We cannot expect love and harmony and good will toward men if we human beings exploit and destroy other beings. Just because we human beings are superior, what right do we have to kill the inferior? For example, if a child is deaf and dumb and his brothers tell his father, “We want to kill our useless brother,” will the father be pleased? He’ll warn the stronger sons that if they harm their weaker brother he’ll punish them. Naturally the father has special affection for his weaker son.

Furthermore, not only will the brothers suffer the father’s punishment, but once having killed a brother who was weaker, the stronger brothers will become bloodthirsty and start making plans to kill one another. It is not difficult to apply this analogy to the world situation. In a planned and organized way, human beings are slaughtering many thousands of animals daily, and all the religious denominations say it isn’t a sin because “the animals have no souls. “All this despite God’s commandment that man shall not kill. No wonder we have no relief from strife, crime, and war.

Srila Prabhupada never compromised the truth. He exposed the sham of the politicians, the sham of the scientists, the sham of so-called religious leaders, and the sham of materialistic society, friendship, and love. No one that his disciples had ever met was as forthright as Srila Prabhupada, the Lord’s pure devotee. No one could both expose the problems and offer real solutions. His utter humility and dedication to the mission of his spiritual master, even in his old age, was what attracted us to him. To fulfill that mission he was prepared to undergo any hardship and take any risk, even to journey alone by freighter from Vrndavana, India’s most sacred and serene village and the site of Lord Krsna’s pastimes, all the way to New York City, the iron city of the Age of Quarrel and Hypocrisy. A mendicant, he did not have anything to take with him but his faith, his translations of the Vedic literatures, and a pair of hand cymbals. This was his greatness, and we cynical sixties rebels (with and without causes) could not help but be attracted.

Srila Prabhupada was dignified and scholarly, humble and serene, an artist and a scientist, a true teacher, and yet he was totally without any means. So how could we be blamed for offering whatever we had to him? First we purchased his books and read them, then we gave some service (the first service I did was to wash his dishes). Then we gave some things that were needed (I gave him my typewriter and my desk lamp). Then we gave money (I put a hundred-dollar bill into the collection basket he used to pass around after class, just to get the pleasure of seeing his face light up with appreciation). By that time he had taken possession of our hearts. We loved him sincerely, and he loved us in return and devoted every ounce of energy within his frail frame to one thing only—seeing to it that we became fixed in spiritual life, Krsna consciousness.

This love just grew and grew as we worked together with him—trying to keep up with his energy, enthusiasm, and intelligence—until we surrendered and became loving instruments to be used by him in his mission of saving the world from godlessness, sense gratification, and mental speculation.

In his final days Srila Prabhupada made a heroic effort to return from India to the West and see us, although he could journey only as far as London. He actually was our servant, even though it was we who bowed our heads at his feet and did anything he told us.

Now the responsibility for this mission lies with us. And we who are nothing compared to him will fulfill that mission, rest assured, because each of us has vowed this in his heart. We shall do it by working together as a spiritual family, because although we all know what we are separately, together we are strong. Together we are him and we will do as he did. “He lives forever by his divine instructions, and the follower lives with him” is how Srila Prabhupada dedicated his first book to his spiritual master. Srila Prabhupada is not dead. You can see him in us, because we are trying to follow his instructions. On his birthday anniversary we can rejoice, because Srila Prabhupada lives. All the world can take heart in this. This is the mercy of Krsna.