Back to Godhead > Society > Three Examples of Perfect Leadership 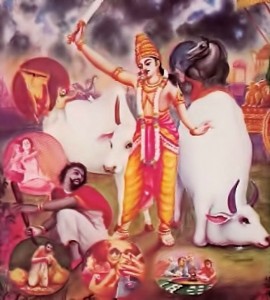 Even armies of bodyguards can’t protect today’s political leaders, but King Pariksit was such an exalted personality that he was always perfectly protected by Lord Krishna Himself. Even as a child in his mother’s womb, Lord Krishna shielded him from the searing heat of a nuclear weapon hurled by his father’s enemy. Later Pariksit was trained and finally enthroned by his grandfather, King Yudhisthira.

King Pariksit followed the Vedic system of consulting a council of brahmanas (learned and saintly philosophers) on state affairs. While today’s “think tank” experts sell themselves to the highest bidder, the self-realized sages who advised Maharaja Pariksit gave their services freely, without salary. Thus they were above suspicion of any special interest, and they guided the king purely and flawlessly in his administration.

Maharaja Pariksit was very vigilant in protecting the citizens. When the four symptoms of sinful life so prominent in modern times—illicit sex, intoxication, meat-eating, and gambling—began to appear, he undertook a tour of the world to vanquish them from his kingdom. He came across an abominable low-class man torturing a cow and severely chastised him with the following words: “Whoever causes offenseless living beings to suffer must fear me anywhere and everywhere in the world. Any upstart who tortures the innocent shall be immediately uprooted by me, no matter who he may be.” Foreseeing the future degradation of human society, Pariksit then said that if an unqualified, sinful man is allowed to act as an executive head, “certainly irreligious principles like greed, falsehood, robbery, incivility, treachery, misfortune, cheating, quarrel, and vanity will abound.”

Although King Pariksit was certainly famous for his impeccable administration, he is better known for his spiritual activity after leaving the post of king. Early in his reign he was cursed to die by a young brahmana boy due to a misunderstanding. Although he could have nullified the curse, King Pariksit accepted it as God’s will, and decided to fast until death. He seated himself on the bank of the Ganges River, and an assembly of the greatest personalities of the day soon gathered to witness the wonderful event. During the seven days of life remaining to him, King Pariksit neither ate nor slept nor moved from his seat. His only activity was to ask Srila Sukadeva Gosvami questions about transcendental subjects and to listen intently to his answers in the form of Srimad-Bhagavatam, The Beautiful Story of the Personality of Godhead. The Srimad-Bhagavatam is the culmination of all Vedic knowledge and simply by hearing it, the king achieved the highest goal of life—ecstatic love for Lord Sri Krishna, the Supreme Personality of Godhead. 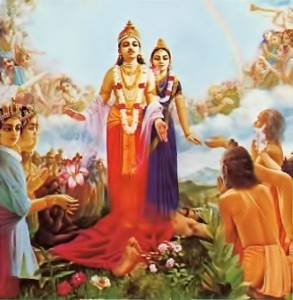 Unlike today’s leaders, Maharaja Prthu considered it his primary duty to enlighten the citizens with spiritual knowledge. He knew that any leader who simply exacts taxes from the people, but does not inform them of the mission of human life, is thoroughly condemned. Indeed, he is liable to suffer for the impious activities they perform out of ignorance. King Prthu advised the citizens: “Dedicate your minds, your words, your bodies, and the fruits of your labor for the service of the Supreme Lord. Then you will surely achieve the final objective of life [love of God].”

In addition, under the king’s firm hand all law-abiding citizens were perfectly protected from both internal and external dangers. Everyone was pleased by his practical activities, and all the citizens were very satisfied to have him as their ruler. When he traveled through the world on his victorious chariot, appearing as brilliant as the sun, all thieves and rogues hid themselves, and all other kings recognized his supremacy.

However, King Prthu did not present himself as a royal authority empowered to command everyone. In fact, he was renowned for his humility and impartiality. He ruled so impartially that if the son of his enemy was innocent, he would not punish him, but if his own son was punishable, he would not hesitate to punish him. Even though he was very opulent due to the prosperity of his entire empire, King Prthu was never inclined to utilize his opulences for the gratification of his senses. He remained unattached, exactly like the sun, which remains unaffected in all circumstances.

Like all saintly kings of the Vedic age, King Prthu voluntarily gave up his rule before death or infirmity overtook him, and he retired to the forest to completely immerse himself in God consciousness. 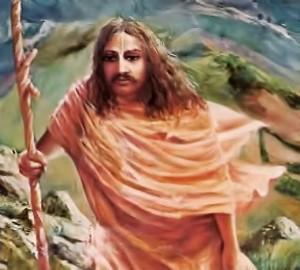 King Yudhisthira was famous as “the king whose enemy was never born” because he was so pious that no one hated him. Indeed, his qualifications were so glorious that his fame spread all over the universe and his pure devotional service induced the Supreme Lord Krishna Himself to become his intimate friend.

Another epithet for King Yudhisthira was “the personification of goodness,” for by continuous service to Lord Krishna, he was freed from all desire for sense gratification and personal wealth, fame, or power. This complete selflessness made him a worthy emperor of the world. “All good for the citizens!” was his motto, and he lived up to it by always seeing to the social, political, economic, and spiritual upliftment of the citizens of his kingdom. Due to his perfect administration and his pure devotion to God, even the rivers, oceans, hills, forests, etc., were all pleased with him, and they supplied their bounty profusely. Thus during the reign of King Yudhisthira the citizens of the world were never troubled by a lack of any necessity, or by mental agonies, diseases, excessive heat or cold, or any other disturbance.

Like all saintly kings of the Vedic age, Yudhisthira renounced his kingdom at the end of life to devote himself exclusively to spiritual practice. After enthroning Pariksit as emperor of the world, Yudhisthira gave up his regal dress and left for the North. His devotion to Lord Krishna was so pure that even before relinquishing his body he achieved the highest spiritual abode.