Back to Godhead > Devotees > Chanting > Chanting the Hare Krishna Mantra in Downtown Detroit. 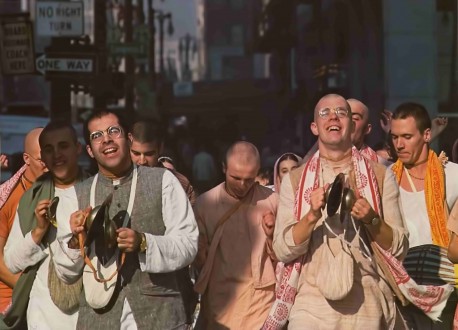 Members of the International Society for Krishna Consciousness Chanting the Hare Krishna Mantra in Downtown Detroit.

Once you’ve heard it, you’ll never forget it. You may not know what the words mean—nevertheless there’s something captivating about the Hare Krishna chant. Is it the catchy tune, or the fascinating way in which the words are repeated and reversed? People who chant Hare Krishna say both contribute to its appeal. But they know that the secret of the chant’s attraction is the quality of the sound itself.

Anyone can take three words and make a song out of them, combining them in a clever way. But can that concoction be meditated on all day and night? Would the chanters of those words report, as do the chanters of Hare Krishna, that the practice is freeing them from anxiety, opening up their minds to a liberated view of themselves, and investing them with blissfulness? No, of course not. The invented litany would only drive its creators to distraction.

The words Hare, Krishna, and Rama have a special quality because they are seeds of pure spiritual consciousness. They are not a product of an earthbound language changing through the centuries. They are names of God, as ceaselessly energetic as God Himself. When you pronounce these sounds, you are propelled into your eternal position as a particle of spiritual energy, a person living in a transcendental nature. Hare Krishna reveals to you the person you really are.

Read more about Krishna consciousness in this issue of BACK TO GODHEAD magazine.

The International Society for Krishna Consciousness (ISKCON) is a worldwide community of devotees practicing bhakti-yoga, the eternal science of loving service to God. The Society was founded in 1966 by His Divine Grace A. C. Bhaktivedanta Swami Prabhupada, a pure devotee of God representing an unbroken chain of spiritual masters originating with Lord Krishna Himself. The following eight principles are the basis of the Krishna consciousness movement. We invite all of our readers to consider them with an open mind and then visit one of the ISKCON center to see how they are being applied in every day life. 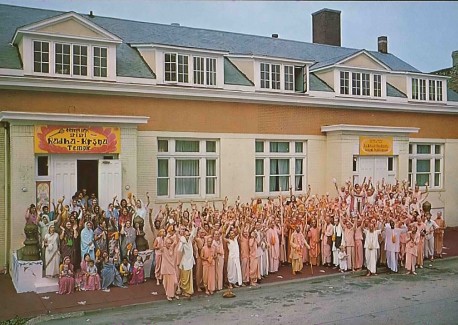 Devotees outside the Chicago center of the International Society for Krishna Consciousness.