Back to Godhead > Krishna > The Royal Road to Krishna

The Royal Road to Krishna 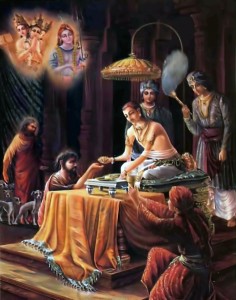 Though he was nearly dead from hunger and thirst, King
Rantideva shared his food and drink with beggars

From the Srimad-Bhagavatam, translation and commentary by His Divine Grace A.C. Bhaktivedanta Swami Prabhupada. (Adapted by Drutakarma dasa.)

“It is easier for a camel to pass through the eye of a needle than for a rich man to enter into the kingdom of God.” Yet even a king—the richest man—can enter into God’s kingdom if he knows the science…

The Generosity of King Rantideva

For himself, King Rantideva was always satisfied and depended completely on the Lord’s providence. At the same time, when guests came to his palace the generous king would personally look after their every comfort, as if it all depended not on providence but on him. Once King Rantideva fasted for forty-eight days, but he never complained or made any attempt to get food. On the morning of the forty-ninth day, he received a sizeable quantity of well-prepared food. But just as he was about to take his meal, a learned brahmana priest arrived as a guest.

King Rantideva was very advanced in spiritual knowledge, so he could see that the Supreme Lord Krishna dwells in the heart of every living being. As a result, he received his guest with faith and respect and gave him a share of the food. The brahmana ate to his satisfaction and went away.

Now King Rantideva again prepared to break his long fast, but just as he was about to take his first bite, a low-class laborer entered the palace. King Rantideva could also see Krishna dwelling in the heart of this sudra, so he gave him a portion of the food as well.

After the sudra had gone away, a bearded and bedraggled man surrounded by a pack of dogs arrived before King Rantideva. “O King,” he said, “my company of dogs and I are very hungry. Please give us something to eat.” With great respect King Rantideva gave what was left of his food to the dogs and their master.

Now only some drinking water remained, and there was only enough for one person. When the king was just about to drink it, a candala (a dog-eater, the lowest of men) appeared before him and said, “O King, although I am lowborn, kindly give me some drinking water.”

Touched by these pitiable words, the good-hearted King Rantideva said, “By offering water to maintain the life of this poor candala, I shall not be the loser—by this act of charity I shall free myself from all hunger, thirst, fatigue, and illusion.

“I do not pray to the Supreme Personality of Godhead Krishna for the powers of mystic yoga, nor for salvation from repeated birth and death in the material world. I want only to stay on this earth among all the living creatures and suffer all their pains for them. In that way they may be freed from all distress.”

The ravages of hunger and thirst had brought King Rantideva to the verge of death, and yet he gladly gave even his last drop of water to the wretched candala. Just then Lord Brahma, Lord Siva, and other great demigods appeared before the king and revealed that it was they who had presented themselves as the brahmana, the sudra, the candala, and the man with the dogs.

The demigods were very pleased with King Rantideva and wanted to bestow great wealth and opulence upon him. But the king had no desire to enjoy such things. He simply wanted to keep his mind focused on the lotus feet of Lord Krishna and render devotional service unto Him. Rantideva knew that Krishna is the eternal master of all the demigods and that the demigods’ gifts are temporary—they pass away with the passing of time. A pure devotee, King Rantideva cared only about his eternal loving relationship with the Supreme Lord.

King Yayati was much inclined to sex and once had a child by his wife’s maidservant. His wife, Devayani, was frenzied with anger and returned to the house of her father, Sukracarya. Sukracarya possessed great mystic powers, and when he saw Yayati tagging along pathetically after Devayani, he cursed him to immediately become an old man. But he also gave the king a way out. “You may get back your youth,” said Sukracarya, “if you find someone who will agree to take your old age and transfer his youth to you.”

King Yayati wanted desperately to regain his youth, so that he could enjoy many more years of sex indulgence with young women. So he went to his eldest son Yadu and asked him to make the trade of youth for old age. But Yadu replied, “I do not welcome your old age and invalidity now, father, for unless I properly fulfill my material desires in my youth, I will not be ready to devote myself fully to spiritual life in later years.” King Yayati similarly requested his sons Turvasu, Druhyu, and Anu to exchange their youth for his old age, but their response was not as admirable as Yadu’s. They refused to carry out their father’s order because they thought their fleeting youth was eternal. King Yayati then approached Puru, his youngest son.

Puru replied, “O your majesty, who in this world can repay his debt to his father? By the mercy of one’s father one gets this human body instead of an animal body. Thus one gets the chance to become a devotee of Krishna, the Supreme Lord.” Puru was more than pleased to accept his father’s old age. So King Yayati took his son’s youth and began to enjoy life once again. He became emperor of the entire world and enjoyed as much material happiness as he desired. Especially, he enjoyed the company of his young and beautiful wife, Devayani. 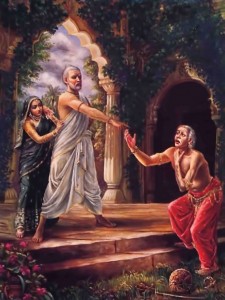 Because lusty King Yayati had been unfaithful to his wife, her father cursed the king with old age and invalidity.

For some years King Yayati enjoyed himself in this way, but somehow he never felt satisfied. Finally, he became completely disgusted with sex life and everything connected with it—power, prestige, wealth, and so forth. One day he told Devayani, “O my dear wife with beautiful eyebrows—I am so poor in intelligence that I am no better than a lusty goat. I was bewildered by your beauty and forgot my real task of realizing my eternal spiritual identity. I never succeeded in satisfying my lusty desires, no matter how much so-called enjoyment I had. Pouring butter on a fire does not put the fire out—it blazes higher and higher. Sexual desires are difficult to give up, but I must and will learn to give them up. Henceforward I shall not even sit in the same room with my mother, sister, or daughter. Sex desire is so relentless that even the greatest sages become disturbed by the slightest sexual stimulus. For years I have tried in vain to satisfy my desires, but now I shall give them all up. I will go alone to the forest and meditate upon the lotus feet of the Supreme Personality of Godhead, Lord Krishna.”

Having given up all his lusty material desires (and having inspired Devayani to give hers up, also). King Yayati called for his son Puru, returned Puru’s youth, and took back his own old age. Then, although Puru was younger than all his brothers, Yayati enthroned him as emperor of the world. The king and his wife Devayani had enjoyed sense pleasure to the fullest extent, but now they gave it all up in an instant. At last, Yayati and Devayani became great devotees of Lord Krishna.

One Response to The Royal Road to Krishna