Back to Godhead > Society > Religion > Srila Prabhupada Speaks Out On Christ, Christians and Krishna

Srila Prabhupada Speaks Out On Christ, Christians and Krishna

On Christ, Christians and Krishna

The Tolerance And Compassion of Christ 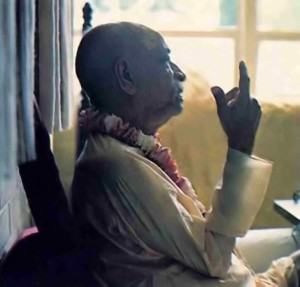 The Srimad-Bhagavatam states that any bona fide preacher of God consciousness must have the qualities of titiksa (tolerance) and karuna (compassion). In the character of Lord Jesus Christ we find both these qualities. He was so tolerant that even while he was being crucified, he didn’t condemn anyone. And he was so compassionate that he prayed to God to forgive the very persons who were trying to kill him. (Of course, they could not actually kill him. But they were thinking that he could be killed, so they were committing a great offense.) As Christ was being crucified he prayed, “Father, forgive them. They know not what they are doing.”

Christ, the Friend Of All Living Beings

A preacher of God consciousness is a friend to all living beings. Lord Jesus Christ exemplified this by teaching, “Thou shall not kill.” But the Christians like to misinterpret this instruction. They think the animals have no soul, and therefore they think they can freely kill billions of innocent animals in the slaughterhouses. So although there are many persons who profess to be Christians, it would be very difficult to find one who strictly follows the instructions of Lord Jesus Christ.

Christ Goes On Suffering for Your Sins?

A Vaisnava [a pure devotee of the Lord] is unhappy to see the suffering of others. Therefore, Lord Jesus Christ agreed to be crucified—to free others from their suffering. But his followers are so unfaithful that they have decided, “Let Christ suffer for us, and we’ll go on committing sin.” They love Christ so much that they think, “My dear Christ, we are very weak. We cannot give up our sinful activities. So you please suffer for us.”

Jesus Christ taught, “Thou shalt not kill.” But his followers have now decided, “Let us kill anyway,” and they open big, modern, scientific slaughterhouses. “If there is any sin, Christ will suffer for us.” This is a most abominable conclusion.

Christ can take the sufferings for the previous sins of his devotees. But first they have to be sane: “Why should I put Jesus Christ into suffering for my sins? Let me stop my sinful activities.”

Suppose a man—the favorite son of his father—commits a murder. And suppose he thinks, “If there is any punishment coming, my father can suffer for me.” Will the law allow it? When the murderer is arrested and says, “No, no. You can release me and arrest my father; I am his pet son,” will the police officials comply with that fool’s request? He committed the murder, but he thinks his father should suffer the punishment! Is that a sane proposal? “No. You have committed the murder; you must be hanged.” Similarly, when you commit sinful activities, you must suffer—not Jesus Christ. This is God’s law.

Of course, the message that Christ preached was just according to his particular time, place, and country, and just suited for a particular group of people. But certainly he is the representative of God. Therefore we adore Lord Jesus Christ and offer our obeisances to him.

Jesus Is Our Guru

Once, in Melbourne, a group of Christian ministers came to visit me. They asked, “What is your idea of Jesus Christ?” I told them, “He is our guru. He is preaching God consciousness, so he is our spiritual master.” The ministers very much appreciated that.

Actually, anyone who is preaching God’s glories must be accepted as a guru, Jesus Christ is one such great personality. We should not think of him as an ordinary human being. The scriptures say that anyone who considers the spiritual master to be an ordinary man has a hellish mentality. If Jesus Christ were an ordinary man, then he could not have delivered God consciousness.

Krishna or Christ, The Name Is the Same

Christ comes from the Greek word Christos, and Christos is the Greek version of the word Krsta. When an Indian person calls on Krishna, he often says “Krsta.” Krsta is a Sanskrit word meaning “the object of attraction.” So when we address God as “Christ,” “Krsta,” or “Krishna,” we indicate the same all-attractive Supreme Personality of Godhead. When Jesus said, “Our father, who art in heaven, hallowed be Thy name,” that name of God was Krsta or Krishna. “Christ” is simply another way of saying “Krsta,” and “Krsta” is another way of pronouncing Krishna.

Therefore, the Christian clergymen should cooperate with the Krishna consciousness movement. They should chant the name Christ or Christos and should stop condoning the slaughter of animals. This is not some philosophy that I have fabricated; it is taught in the Bible. If the Christians follow these principles, the world situation will improve. If they simply stop killing animals and chant the holy name of Christ, everything will be perfect. The Bible also demands this. So the Christians should cooperate with us and chant.

5 Responses to Srila Prabhupada Speaks Out On Christ, Christians and Krishna