Back to Godhead > ISKCON > News > On the origin of life

On the origin of life 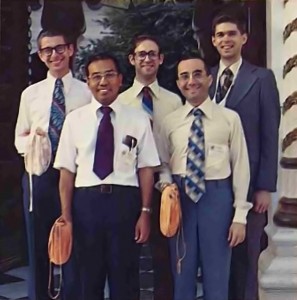 In mid-October, as the world’s attention turned to the 1977 Nobel Prize science awards in Stockholm, a group of scientists met in the holy town of Vrndavana, India, to begin changing the direction of modern scientific research. The First International “Life Comes From Life” Conference, sponsored by ISKCON’s Bhaktivedanta Institute, drew government and academic scientists from around the world. Also present was His Divine Grace A.C. Bhaktivedanta Swami Prabhupada, the founder- acarya of both ISKCON and the Institute.

Meanwhile, in Stockholm, Russian-born Ilya Prigogine was receiving an award for his thermodynamic mathematical models, which other scientists have tried to use in their as yet fruitless attempts to prove that life comes from chemical combinations. (Despite Prigogine’s models, no scientist has ever observed life coming from chemical combinations, either in nature or in the laboratory. Nevertheless, Prigogine received $145,000 for his work.) On the other hand, the Bhaktivedanta Institute members at the “Life Comes From Life” Conference in Vrndavana conclusively proved that life can’t possibly come from chemicals and that—as we see daily—life comes from life.

The members of the Bhaktivedanta Institute describe themselves as “a body of scientists and scholars who have recognized the unique value of the teachings of Krishna consciousness brought to the West by His Divine Grace A.C. Bhaktivedanta Swami Prabhupada.” “One reason for the increasing interest of modern intellectuals in Srila Prabhupada’s teachings,” they explain, “is doubtlessly the growing awareness that despite great scientific and technological advancement, the real goal of human life has somehow been missed. The philosophy of the Bhaktivedanta Institute provides a meaningful answer to this concern by proposing that life—not matter—is the basis of the world we perceive.” The members add, “The Institute is clearly demonstrating that the Vedic philosophy is not a matter simply of ‘faith’ or ‘belief’ but is scientific in the strict sense of the term.”

The “Life Comes From Life” Conference took place in the pleasant surroundings of ISKCON’s modern Krishna-Balarama temple complex, with its blend of traditional Indian architecture and Western conveniences. Guests stayed at the temple’s International Guest House and dined on delicious vegetarian fare from the guest house restaurant, all free of charge. Mild sunshine during the day and cool breezes at night made for a serene atmosphere.

The main speakers at the conference were Dr. Thoudam Damodar Singh (Svarupa Damodara dasa) and Dr. Richard Thompson (Sadaputa dasa), both of the Bhaktivedanta Institute. Dr. Singh, the Institute’s director, was born in Manipur, India, in 1941 and became a disciple of Srila Prabhupada in 1970. He has written a book entitled The Scientific Basis of Krishna Consciousness and holds a Ph.D. in physical organic chemistry from the University of California.

To support the conclusion that life comes from life. Dr. Singh presented his findings in the field of molecular biology. Modern science is based on quantum mechanics, which reduces physical phenomena to pushes and pulls among certain particles. Having made these assumptions, scientists go on to say that life and life symptoms result from complex combinations of molecules. But Dr. Singh showed clearly that such theories do not adequately explain the varied phenomena of life (including thought, emotions, and will). Life is based on consciousness, he proposed, and this consciousness obeys higher-order non-physical laws imposed by the supreme consciousness described in the Vedas.

Born in 1947 in Binghamton, New York, Dr. Thompson received his Ph.D. in probability theory from Cornell University in 1974. In 1975 he became an initiated disciple of Srila Prabhupada. At the conference he delivered a well-received address called “Demonstration by Information Theory that Life Cannot Arise from Matter.” A fundamental proposition of information theory states that the information content of a closed mathematical system cannot increase. Now, modern science describes physical nature in terms of mathematical models of low information content, and yet the physical structures of living organisms are so complex that they indicate a very high information content. So, according to information theory, it is impossible to suppose that life’s high-information structures can arise from physical nature’s low-information structures. On this basis Dr. Thompson discredited the now widely accepted theory that life forms do in fact evolve spontaneously from the ingredients of physical nature. Such evolution requires an outside source of information—namely, the supremely conscious controller of matter described in the Vedas.

One Response to On the origin of life