“The spiritual movement he began will increase more and more.” 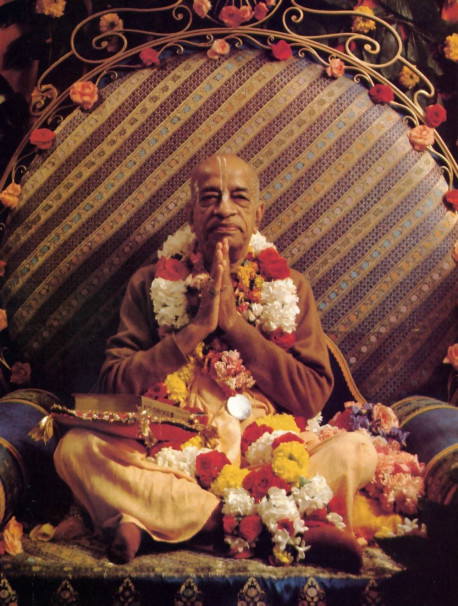 September 3, 1980, marks the eighty-fourth birthday anniversary of His Divine Grace A.C. Bhaktivedanta Swami Prabhupada, who departed from the material world three years ago in Vrndavana, India. Even before his passing away, there were predictions that after his disappearance the movement and teachings he had established would soon fall apart. Now it is three years later, and Srila Prabhupada’s unique contributions are still flourishing. And in my own study of Srila Prabhupada’s life I have begun to appreciate that he very deliberately and brilliantly acted to perpetuate his Krsna conscious contributions to the world.

As with his other work, Srila Prabhupada began his ongoing society—the International Society for Krishna Consciousness-alone. The idea of a league of God conscious devotees to spread the scriptural teachings of Bhagavad-gita was not his own invention, but had been given him by his spiritual master and the previous teachers in the disciplic succession of Krsna consciousness. In bygone ages, great spiritual masters in India had undertaken extensive tours to introduce Vedic teachings. Srila Prabhupada, however, was the first authorized representative of Bhagavad-gita to come to the West and create followers from those born outside the Vedic culture.

Vedic scriptures advise that one serve God in the association of God’s devotees. From the beginning, therefore, Srila Prabhupada tried to create a society of Krsna conscious devotees. Yet the obstacles were formidable. When he traveled to America in 1965, Srila Prabhupada saw a spiritually bleak and confused nation. In the Communist countries of the East the state forbids and forcibly attempts to crush the growth of spiritual knowledge, but in the “free” West the virtues of spiritual life are almost as effectively crushed by hedonism. Professor Thomas Hopkins has described the difficult circumstances Srila Prabhupada faced in the West: “He was seventy years old when he began this work he had no financial resources, he was a total stranger in a foreign country, and he was setting out to sell devotional purity in New York City, the capital city of ‘do your own thing.’ “Yet in the eleven years during which Srila Prabhupada created and developed ISKCON (his acronym for “the International Society for Krishna Consciousness”), he saw it grow from a few interested boys into a worldwide society of thousands of full-time initiated disciples and an ever broader congregational following.

But Srila Prabhupada’s society of devotees is not merely an institutional structure. Ultimately the society’s purpose is to arouse one sinner love for Lord Krsna. “If one man becomes a pure devotee of the Lord,” Srila Prabhupada said, “we shall consider our attempt a success.” According to Bhagavad-gita everyone has dormant love for Krsna in his heart, and therefore everyone is ultimately Krsna’s devotee. At present, however, most people are acting against the will of the Lord, because they are covered by illusion. It takes an especially empowered devotee to remove the covering of false ego and revive a person’s normal spiritual identity as an eternal servant of Krsna. That Srila Prabhupada could do this in the West, where people are blinded by a bodily concept of happiness, is in itself miraculous. And the sincere devotees he has initiated will continue his work, because their dedication has been awarded with self-realization and the higher taste of spiritual pleasure.

In his later years, Srila Prabhupada entrusted the direction of this society to a group of some twenty disciples, whom he formed and guided into a “governing body commission.” This managerial body continues to act, dedicated to protecting and carrying out Srila Prabhupada’s purposes for the Krsna consciousness movement. Srila Prabhupada also chose disciples to act as initiating gurus to continue the succession of spiritual masters and disciples, an absolute necessity for spiritual life.

When asked why his devotees or teachings should be organized into an institution, Srila Prabhupada pointed out, “I am traveling all over the world. and I see immense arrangements for sense gratification. But I don’t see any arrangement for Krsna consciousness.” He therefore created such an arrangement.

Yet much more would have to be done. “I have built the structure for a skyscraper,” he said, “but those who take up the work after me will have to fill in its floors. It is not one man’s work.” Only if the devotees worked together, Srila Prabhupada taught. would the real potency of Krsna consciousness come forth to fulfill the world’s great need for spiritual realization. 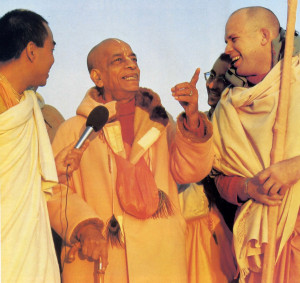 Delighting his disciples with spiritual insights, Srila Prabhupada instructed them in the philosophy of Krsna consciousness as he himself had received it through the chain of disciplic succession.

Srila Prabhupada also foresaw a day when society at large would respond to the social manifesto of the Vedic scriptures. The Krsna conscious teachings would divide society into natural social and spiritual orders to foster both self-realization and material well-being. Srila Prabhupada therefore inspired his disciples to have their farm communities and urban centers demonstrate in microcosm this ideal social arrangement.

Srila Prabhupada wrote to his disciples in July of 1967, “After all, I am old man. There is no certainty of my life, and at any moment I can collapse and it will not be surprising. But I wish to leave some of my spiritual children so that they may work and this philosophy of Krsna consciousness may be broadcast all over the world. . . . If you understand the philosophy, it will be a great help for the suffering humanity.” As the present Krsna conscious devotees created by Srila Prabhupada mature in spiritual realization, and as more take up the practice of Krsna consciousness, the strength and purity of the Krsna consciousness movement will only increase. Although his followers may not match the devotional perfection of Srila Prabhupada himself, all devotees who sincerely follow his instructions put themselves on the path of perfection. If we find a devotee who is not yet mature, we should not criticize the process. Krsna Himself says in Bhagavad-gita that if one has rightly resolved to become a devotee, even if he commits a mistake he must still be considered saintly, and his faults will quickly be corrected by sincere devotional service. 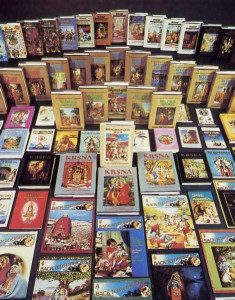 To record these teachings in permanent form and distribute them widely, he translated and published a virtual library of Vedic literature

Srila Prabhupada also insured the perpetuation of his work by writing, publishing, and distributing Krsna conscious books. In the last eleven years of his life, he translated into English and published more than sixty volumes of Vedic scripture. (And his disciples, under his direction, published these books in French, Spanish, German, and more than thirty other languages.) By comparative study, the original Sanskrit and Bengali Vedic writings constitute the most voluminous and comprehensive body of scriptural knowledge in the world. Now Srila Prabhupada’s translations of and commentaries on Srimad-Bhagavatam and Caitanya-caritamrta have introduced this knowledge to universities and libraries throughout the West.

Because Srila Prabhupada was not only an expert scholar in Vedic study but a realized devotee and practitioner, whoever reads his Bhaktivedanta purports will come directly in touch with Krsna through the written word. Once in April of 1975 while taking a morning walk with several disciples in Vrndavana, Srila Prabhupada said, “Those who are purchasing the books are intelligent. When they read them, how will the movement stop? It will not stop. The book distribution is so important that the movement will continue to stay.”

The chanting of the Hare Krsna mantra, another of Srila Prabhupada’s contributions, is also going on steadfastly. The sound waves of the holy names of God, started by one pure devotee, now travel around the world, broadcast from East to West. Lord Caitanya predicted five hundred years ago that the chanting of Hare Krsna would be heard in every town and village, but no one made this possible until Srila Prabhupada. 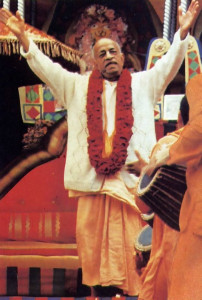 Chanting the Hare Krsna mantra, Srila Prabhupada began waves of transcendental sound that have spread around the world.

Undoubtedly the chanting will continue, because people are feeling the benefit of it. To get the full effect of the chanting, however, one should hear it from a practising devotee. In 1967 a girl wrote from a distant country to ask Srila Prabhupada whether her efforts to spread the chanting of Hare Krsna would have any effect. Srila Prabhupada replied, “Yes, whoever you tell the chant to, it is effective. You have heard it from me and my disciples, and similarly I have heard it from my Guru Maharaja, and so on and on. . . . My disciples are my agents, my representatives. So by hearing it from them, you are receiving it from me. And because you are a sincere soul, those who are hearing the mantra from you are receiving it in disciplic succession from Lord Caitanya and Lord Krsna.

As long as there are sincere devotees following the instructions of Srila Prabhupada, they will be able to pass on the chanting of Hare Krsna with same potency as Srila Prabhupada.

In the beginning, Srila Prabhupada chanted alone in Tompkins Square Park in New York and started the waves of the Hare Krsna mantra in the West. The spiritual momentum he began will increase more and more. And as the glorification of the holy name goes on, it will increase the glories of the pure servant of the holy name who presented it so faithfully. When his disciples faced difficulties in spiritual life, Srila Prabhupada would advise, “Just chant Hare Krsna.” As he said, “No other means of spiritual realization is as effective in this age of quarrel and hypocrisy as the chanting of the maha-mantra—Hare Krsna, Hare Krsna, Krsna Krsna, Hare Hare / Hare Rama, Hare Rama, Rama Rama, Hare Hare.” 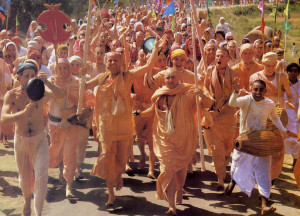 We could go on at great length enumerating Srila Prabhupada’s contributions and giving evidence that they will endure. But for our present purposes we will make just one more point: Srila Prabhupada gave us the opportunity, above all, to attain the goal of Krsna consciousness. As stated in the Vedic scriptures, the goal of human life is to get out of the cycle of birth and death, which is always beset with miseries. Spiritual knowledge begins with the understanding that a person is a spiritual soul, not his body. And this knowledge finally culminates in pure devotional service to Krsna. One who leaves his body at the time of death thinking of Krsna need not return to birth and death, but gains the eternal spiritual world. By Srila Prabhupada’s behavior and qualities, we can understand that he himself realized that eternal goal, but in the compassionate way of saintly persons he left us the method by which we also can attain the goal. This is the ultimate purpose of ISKCON, the reason for the association of devotees, the subject matter to be learned in the books, and the message of chanting Hare Krsna—to attain pure devotion to Krsna and enter an eternal, blissful relationship with Him.

It is Lord Krsna Himself, the Supreme Personality of Godhead, who sustains the Krsna consciousness movement throughout history. The real question, therefore, is not whether Krsna consciousness will continue, but whether each one of us will take part. If we take part, it will help us. If we join this movement fully, we will be protected from the material world and regain the association of Krsna. Even taking part in Krsna consciousness only slightly can save us from the greatest danger, that of falling into lower species after death.