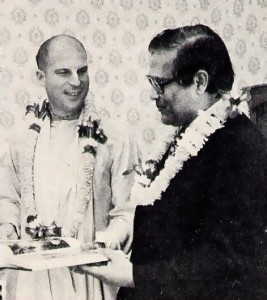 Ambassador Rajaryal receives · Bhagavad-gita.
As It Is from Srila Bhagavan Gosvami

Paris—Krishna Rajaryal, Ambassador to France from Nepal, recently met with several representatives of the International Society for Krishna Consciousness (ISKCON) to voice his support for the Society, which has faced occasional attacks here from religious bigots.

Nepal, the only remaining Hindu kingdom in the world, prides itself on its ancient Vedic traditions and religious culture. ISKCON maintains a temple in the Nepalese capital, Kathmandu, where Nepal’s king is among the Society’s life members.

Mr. Rajaryal met with His Divine Grace Bhagavan Goswami, initiating guru for ISKCON in southern Europe, and expressed his appreciation for the Society’s work of establishing Vedic devotional arts and philosophy in the West, He also extended an invitation for Srila Bhagavan Goswami to speak in Nepal some time next year.

“People are hungry for alternatives to the godless society that surrounds them,” Srila Bhagavan Goswami explained. “Our Krsna temples are like embassies of Vedic culture that work to promote God consciousness around the world.”

The ambassador received French and English editions of Bhagavad-gita As It Is, the essential text of Krsna consciousness, and noted, “We will be sure these are placed in the embassy library.” Later the ambassador decided to enroll his son in the Society’s gurukula school at the New Mayapur farm community in Valencay, France.

Young devotees rode horses in the parade celebrating the opening of the new temple.

New Delhi—ISKCON has acquired a new temple and asrama in one of the most prestigious areas of India’s capital city. For years ISKCON New Delhi has languished in the shadows of ISKCON’s larger India projects (such as those in Vrndavana, Mayapur, and Bombay), moving here and there between smallish rented houses. At last it seems that Krsna has blessed the devotees with something more substantial.

The new place has three stories, including ample space for offices and the devotees’ living quarters, an all-marble kitchen, and an exquisite all-marble temple with a central dome and chandelier and teakwood and gold appointments.

On opening day Srila Jayapataka Swami Acaryapada led a procession from the old location, in Lajpat Nagar, to the new location, in Greater Kailash. Devotees and guests—along with a shenai band, an elephant, and brightly decorated white horses ridden by boys from the Krsna conscious school in Vrndavana—escorted the Deities Radha and Krsna to Their new home. All along the way, people came out of their houses to offer flower garlands, gifts, and foodstuffs to Lord Krsna. Farther along the route, flower arches and firecrackers signaled the arrival of the Supreme Lord.

Once the procession had reached Greater Kailash, a pandala tent was set up, and the Deities were bathed in an ecstatic maha-abhiseka ceremony led by Srila Acaryapada. More than one thousand people listened to talks on Krsna consciousness by Srila Acaryapada, ISKCON Governing Body Commissioner Gopala Krsna dasa, His Holiness Giriraja Swami, and His Holiness Lokanatha Swami, the Delhi temple president.

From the pandala the festivities moved to the new temple, where a huge crowd had gathered to watch Srila Acaryapada cut the ribbon and open the doors. As soon as the doors opened, the crowd surged forward for a first view of the Deities.

The festivities culminated in an arati, a worship celebration that featured chanting of Hare Krsna, dancing, and offerings of food and flowers to Krsna. Afterward, some fifteen hundred guests were served a sumptuous feast of prasada, spiritual food offered to Krsna.