The Appearance Day of Lord Krsna

Founder-Acarya of the International Society for Krishna Consciousness 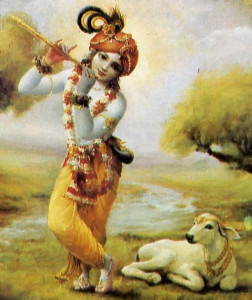 With this article we observe the anniversary of Lord Krsna’s appearance. The article originally appeared in 1955 in The Harmonist, a fortnightly Krsna conscious magazine published in New Delhi.

Hindus all over India celebrate Sri Krsna Jayanti (the anniversary of Lord Krsna’s appearance) as a religious function every year. We have experience that sometimes non-Hindus, out of a deep respect for Lord Sri Krsna, also celebrate the ceremony of Lord Krsna’s Jayanti. The word jayanti is linked with the birth date of the Personality of Godhead. Jayanti is a term for the special constellation of stars that takes place during the appearance of Sri Krsna in this mortal world. But the word jayanti has become so popular a name that it is now attached to birth anniversary dates of big men who are under the conditions of natural laws. This is a wrong application of the word jayanti, which has a special significance in relation to the Personality of Godhead.

We must, however, clearly understand that misapplication of the word jayanti to the birth dates of conditioned men does not mean that Sri Krsna is also a conditioned man. If one accepts Bhagavad-gita by parampara (the disciplic chain of God-realized souls), then one will have to accept Sri Krsna as the Supreme Personality of Godhead, the Absolute Truth. He is the fountainhead of everything that be. The Lord descends by His causeless mercy, to protect His favorite devotees and to vanquish the infidels. Sri Krsna is not conditioned by the laws of nature, as we are, because physical nature is one of His multifarious energies.

The significance of celebrating Sri Krsna Jayanti every year is to try to know Him as He is and thus to get release from the conditioned state of life. To know Him means to get complete freedom from the chain of birth and death.

True observance of Sri Krsna Jayanti will solve the problems and crises in our civilization. Because of human shortcomings, we cannot solve the problems by ordinary plans and suggestions. Human frailties always accompany the best endeavors of a conditioned soul. But solutions offered by scriptures like Bhagavad-gita are eternally perfect. On account of their being transcendentally spoken, the words are identical with Godhead.

When overwhelmed by powerful miseries, political leaders sometimes exclaim in despair that nature is unkind. But such voicings of frustration will not in any way induce nature to become kind. Unkind nature is grim and fixed in her determination; she will never tolerate a pinch of noncooperation or disobedience on the part of the living being. This is the real picture of material nature—a picture rightly painted in the fight of Mahisasura with Durga standing on the lion of passion. * (Srila Prabhupada here refers to a religious illustration, popular in India, that shows Durga (the personification of material nature) wielding a trident. subduing an evildoer.)

To pacify mother nature is as difficult as lording it over her. The remedy is specified by Sri Krsna Himself: one who surrenders unto the Personality of Godhead can get free of the laws of nature. But nobody can surpass her laws by plans and suggestions. Let us not, therefore, fail to cooperate with the laws of Godhead, because such disobedience may force us to be pinched by the trident of the threefold miseries. That is the sign of nature’s unkindness felt by humanity.

The whole cosmic universe is working under a plan of Sri Krsna conducted by the laws of physical nature. Material nature works by the direction of Sri Krsna, and everything is produced by His will. Material nature, however great she may be, is inferior to the spiritual nature, and the living entities are never created by matter of any description. on account of their being spiritual in nature. These spiritual entities are parts and parcels of Godhead, and as such they are fundamentally meant for cooperation in the planned work of Sri Krsna.

In the beginning one can realize the presence of Sri Krsna in phenomenal representations, the objects of nature, both spiritual and material. Physical nature, which is inferior in quality, is represented by earth, water, fire, air, sky, mind, intelligence, and false ego. Spiritual nature is one, absolute, and superior in quality.

Noncooperation with Sri Krsna means misery, because noncooperation with Sri Krsna means forced cooperation with maya. the material nature. We must cooperate with one of them, either willingly or unwillingly. Cooperation with Sri Krsna is inconceivable for empiric philosophers, but for them the conception of His visvarupa (universal form) is practical, though troublesome. If one is unable to know Krsna lying on the lap of Devaki as a little baby son of Vasudeva, let one understand Him in His gigantic feature of visvarupa. But all the same, we living entities are parts and parcels of the whole, Sri Krsna. We are but so many limbs of the whole body. Separation from the whole body means uselessness of the limbs. Living entities, when separated from the voluntary and spontaneous service of Sri Krsna, are useless dead parts progressively decomposing in contact with maya. The limbs then remain limbs in name only, for they actually have no utility in the plan of Sri Krsna. Such dead and decomposed limbs are sources of discomfiture in the total existence, and they require to be ended or mended.

The intellectual class of society (the politicians, professionals, educationists, industrialists, lawyers, etc.), all captivated by the glamor of physical nature, are engaged in worshiping materialism, although they have a potential capacity to understand this cooperative relationship of the living being with the Supreme Whole. Modern civilized men, not having cooperated with the established plan of God, have wrongly identified themselves as products of material energy. Such deluded leaders of society offer persistent stumbling blocks on the way of spiritual understanding of our cooperative relationship with the Supreme Whole. Without any reference to this cooperative relationship of men with the Absolute Whole, they speak highly of materialistic achievements, because such illusioned, foolish talks give them pleasure. They misconceive that material prosperity will give them a long and prosperous lease on life in the kingdom of heaven, and that by advancement of material knowledge it will be possible for them to overcome the pangs of material existence.

There are many men amongst us who are adept at reading daily the message of Sri Krsna in the pages of Bhagavad-gita, but very few of us cooperate with the plan of God.

Sri Krsna Jayanti day gives us an opportunity to arrange a transcendental congregation for discussion of such holy scriptures as Bhagavad-gita and Srimad Bhagavatam. and for chanting the holy name of God. In this congregation of devotional activity, one and all may join. There is no question of distinguishing between high and low, educated and uneducated, no question of country, color, creed, or faith. Rather, everyone can offer his submissive aural reception to the spiritual sound vibrated from the sources of realized souls. Simple adherence to this principle of aural reception will help one to revive his lost consciousness of his eternal relationship with the Supreme Whole. When this lost consciousness is revived by the chanting process, one becomes pure in heart.

The Indians are privileged to learn this transcendental art at ease and disseminate it all over the world for real peace and prosperity. It is not, however, expected that everyone will be able to learn this art of cooperating with the plan of Godhead. Still, if only the leading members will learn it in theory and practice, that will do immense good to the rest of the people.

On the occasion of Sri Krsna Jayanti day, we hereby invite the leaders of society, educationists, philosophers, religionists, and people in general to come and know this art and disseminate it all over the world. Let us do this responsible work and take a vow on this day of Sri Krsna Jayanti.