Back to Godhead > ~Featured~ > Mad Scientists — Srila Prabhupada Speaks Out 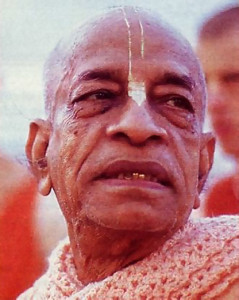 This is a continuation of a conversation that took place between His Divine Grace A. C. Bhaktivedanta Swami Prabhupada and biochemist Thoudam Singh, Ph.D., in Bhubanesvara, India, on February 3, 1977.

Srila Prabhupada: Just try to understand. Anyone who is not a devotee of the Lord—his whole life is a drawback. He has no value. And he is condemned so much. In Bhagavad-glta Lord Krsna calls him duskrtinah, mudhah, naradhamah, mayayapahrta-jnanah: “rascal, ass, lowest of man-kind, knowledge stolen by illusion.”

What can be done? A scientist who does not pursue the real science, the science of God, is condemned.

“Oh? But he has earned so many big degrees.”

No. Mayayapahrta-jnanah—without knowledge of God, his knowledge is not knowledge but illusion. Finished.

Anyone who has no knowledge about this Krsna consciousness—he’s so condemned. You can’t give him any position. It is not possible. Pisaci paile: when a man becomes mad, what is his position?

Even someone who has become a high-court judge—if he has also become mad, he has no position. He’s useless.

“Now, wait just a moment. He is a high-court judge!”

That’s all right. But his present position—because he is mad—has no value.

So what was his value? Just consider. This same man was so educated in so many fields of knowledge. But when he became mad and went running naked, who paid him any respect?

Now, anyone who is under the deluding influence of this material energy—he is like that. Although actually he is part and parcel of God, he has now forgotten God and his own soul. So he’s mad.

And pisaci paile yena mati-channa haya, maya grasta jivera haya sei bhava udaya: When a man becomes mad, he is finished. Whatever he may speak, it is all madness. It has no importance. His words may seem important on the relative platform, but on the absolute platform they must be mad. Because the basic principle behind the words—the man himself—is mad.

Dr. Singh: The madness of the scientists may be a little different. They are mad or illusioned in that they know little of God’s natural law, but they extrapolate vastly.

Srila Prabhupada: You can explain their madness in so many ways, but first try to understand the main idea: a very educated man—when he becomes mad, then he and his words have no value.

In everyday life it is like that. If a high-court judge has become mad, you cannot give him the same high position. You cannot say, “Sir, you are now mad, but that’s no matter. You just come and take your exalted seat, and everything will be all right.” No, that is not possible.

Of course, if by treatment you restore the man to sanity, that is another thing. Then he can work as before. You see, the person’s inner potency is not finished, but as long as he shall remain mad, then his practical qualification will be finished.

Dr. Singh: That was my idea also. For example, a scientist might, let’s say, decide to write an equation that describes a spherical object’s shape. But if he were to take only two points, his equation would be one for a straight line. And he would delude himself and others into thinking the object not spherical but flat or straight.

In other words, in this example, although the scientist may not be running naked, he would still be mad—because he would be basing his conclusion on insufficient knowledge.

Or to put it another way, sanity means understanding that our knowledge of things is very limited. And so, we have to understand, if we extrapolate from our limited knowledge to draw sweeping conclusions—conclusions beyond our knowledge—then it all becomes . . . just becomes false.

Aroha-pantha and avaroha-pantha. To obtain knowledge, you have two paths: the ascending and descending. On the one hand you have the ascending path, on which you try to rise out of your ignorance through experience, trial and error, deduction. On the other hand you have the descending path, which means the knowledge comes down to you from persons with higher experience. The knowledge descends from higher authorities.

In this conditioned state of life—encased as we are by this material body, with its severely limited senses—there are many, many things beyond our knowledge. Therefore we have to take shelter of the descending path. This is our process. We have to take shelter of the Vedas, the scriptures. They are sruti, knowledge heard from higher authorities. This knowledge is perfect—coming from God by the system of parampara. or disciplic succession. This knowledge comes from Lord Krsna to Brahma, from Brahma to Narada, from Narada to Vyasa, and so forth. This knowledge is perfect.

Srila Prabhupada: Hmm. This is perfect.