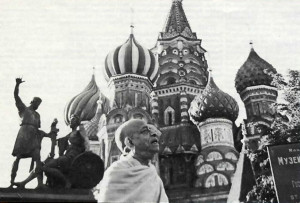 Moscow (April 27)—Members of the Hare Krishna sect said Monday that despite an easing of restrictions on political dissent, Soviet authorities are still detaining followers in prisons and psychiatric hospitals.

Six members of the sect traveled from across the Soviet Union to appeal to authorities to legalize their religion and stop persecution of believers. “Our godbrothers are being put into jails and mental hospitals,” said a statement signed by 46 members. “We are accused of participating in a nonregistered religious-mystical sect and at the same time we are not allowed to register the group.

“We appeal to all the religious and non-religious world organizations to please support us in getting a legal position,” it said. The members said they planned to deliver the appeal to authorities Tuesday.

The news conference, attended by a handful of Western reporters, was the first held by sect members, who previously were reticent to talk to correspondents. The event revealed the hope engendered by recent Kremlin reforms, but also demonstrated that some aspects of Soviet society have not changed.

Only one of the sect members gathered in the cramped apartment on the outskirts of Moscow was dressed in the orange robe commonly worn by Krishnas. None had the shaved head and ponytail often seen on followers of the 15th-century Indian religion when they gather to chant on street corners of Western cities.

“They tell us we are lawbreakers, that we refuse work, that we are anti-social,” said Olga Kustra, 28, a mother and musician. “But, in fact, they don’t allow us to take part in society and we can’t obtain work in our specialties.”

Alexander Gramov, 40, a biologist from Leningrad, said about 26 followers of the sect are in prison camps or psychiatric hospitals, sentenced mostly under article 227 of the criminal code that makes it illegal to practice a religion considered harmful to a person’s rights or health.

He said one member was convicted under the article and another who was serving a term has been re-sentenced since Soviet leader Mikhail Gorbachev announced plans to democratize Soviet society by pardoning 140 political prisoners.

Most of the 140 dissidents released in February and March had been sentenced for anti-Soviet slander or agitation.

Soviet law prohibits religions that are not officially registered, yet the members said their requests to register have been ignored since 1982.

“We tried again to register in July 1985, but so far they have not answered us,” Gramov said. “We invited them to come and visit us, to watch how we pray, what we do. They said they would phone us, but they have not.”

The government maintains the fasting and chanting that are an integral part of the religion are harmful to health and promote anti-social behavior.

But the members maintain they are a positive social force because they are pacifists and vegetarians who do not consume alcohol, nicotine or illegal drugs.

The members estimated (heir numbers in the thousands, but said most only chant the prayers, “Hare Krishna,” and are not active followers. Gramov said 50 people meet in Leningrad regularly to participate in religious ceremonies.

Lewisburg, Pennsylvania—Larry Shinn, dean of Bucknell University’s College of Arts and Sciences, states in his recently published book The Dark Lord: Cult Images and the Hare Krishnas in America that ISKCON is “an authentic missionary movement from India that has all the authenticity of an Indian devotional tradition.” Professor Shinn, a Methodist minister and religious scholar, has been studying the Hare Krsna movement for more than six years. During his research he interviewed one hundred thirty devotees in the United States and India and lived part time in nineteen Hare Krsna temples.

In his 230-page book, Shinn refutes the notion that the Hare Krsna movement is a cult. The devotees are not confined to one place, he notes, nor are their actions controlled. Many travel from temple to temple. And Hare Krsna devotees worship their leader not as God but as God’s representative. Citing ISKCON’s ancient Indian textural tradition, established priesthood, and community in India, he shows that it has all the indications of a genuine religious institution.

Professor Shinn believes that people’s fears of the movement stem from their viewing ISKCON’s religious practices as strange behavior. Yet, he points out, in India there is nothing peculiar about these practices.