Back to Godhead > ~Featured~ > In Praise of Srila Prabhupada

In Praise of Srila Prabhupada

In today’s world of hypocrisy and scandal, we remember Srila Prabhupada’s pure qualities and his example of genuine spiritual leadership. 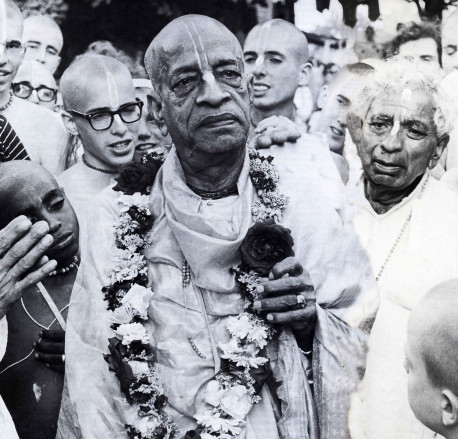 His Divine Grace A. C. Bhaktivedanta Swami Prabhupada, who successfully distributed the message of Lord Krsna throughout the world, was not an ordinary conditioned soul, governed by the harsh laws of material nature. Although he may have apparently exhibited commonplace characteristics, it is evident through careful study of his life that Srila Prabhupada perfectly displayed the qualities of a pure devotee of Lord Krsna.

The Vedic literature states that only one who is free from material bondage can possess these qualities in full. Such a great soul is rarely found within this material realm, and owing to his unparalleled purity and exalted status as an intimate associate of the Supreme Lord, he is worshipable by the entire world. Following are some of the qualities of a pure devotee so eminently exemplified by Srila Prabhupada.

The ultimate expression of mercy is to freely afford everyone the opportunity to develop pure love of Godhead. This Srila Prabhupada did by opening over one hundred temples, printing millions of books, and sending his disciples all over the world to teach the science of Krsna consciousness. His distribution of mercy manifested naturally as a result of his heartfelt compassion for the long-suffering conditioned souls. His mercy fell everywhere, like pleasing rain upon the burning hearts of this age.

When Srila Prabhupada lectured during the early days of the Krsna consciousness movement, he would often tell his listeners, “I have come to your country not to take anything, but simply to give.” Those who were honest and sincere were able to sense Srila Prabhupada’s unalloyed desire to bestow upon them the highest form of mercy, and directed by Krsna within their hearts, they voluntarily placed themselves under his guidance and protection.

Although Srila Prabhupada is now gone from our material vision, his mercy is still available. A liberated soul is not bound by time and space, and neither is his mercy. One only has to open up one’s heart to receive this benediction, which is being distributed freely to everyone.

During the late 1960’s, a generation of young men and women took part in a mass rebellion against the untruths that had been perpetrated upon them by governments, schools, media, and big business. At that time Srila Prabhupada arrived on the scene, boldly preaching the message of Lord Krsna. He spoke truthfully, never altering the pure message in deference to the time and circumstance to attract followers, fame, and money. In an atmosphere seething with the fumes of unrestricted sense gratification, Srila Prabhupada presented a process of spiritual life based on personal sacrifice and purification of the senses.

In those days, with the peace movement in vogue, it was extremely unpopular to speak out on behalf of any form of military activity. But rather than cater to public opinion, Srila Prabhupada spoke the truth about the Bhagavad-gita, explaining to his youthful audience that Arjuna attained spiritual perfection by fighting a war under the order of Lord Krsna. Because of Srila Prabhupada’s own spiritual qualities and his straightforward presentation of Lord Krsna’s message, people gradually began to understand the message and received it with great delight. Such was the powerful effect of Srila Prabhupada’s truthfulness. 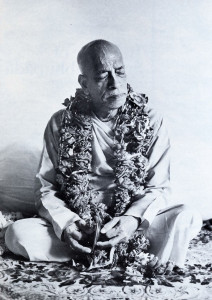 Srila Prabhupada’s gifts to the world were filled with tremendous spiritual value. He gave us a wonderful philosophy to live by, knowledge of our true spiritual identities, beautiful Deities of Krsna to worship, the all-auspicious holy name of Krsna, and delicious krsna-prasadam (sanctified food offered to Krsna). Srila Prabhupada also gave us the spiritually enlivening association of devotees and the opportunity to develop pure love of Godhead and return to a life of eternity, bliss, and knowledge in the spiritual world.

In return for all these blessings, Srila Prabhupada asked nothing for himself. He simply asked that we refrain from sinful activities, chant Hare Krsna, and give Krsna consciousness to others. In this way, selflessly giving of himself at every step, Srila Prabhupada perfectly exhibited the magnanimous nature of a pure devotee of Lord Krsna.

A pure devotee of Lord Krsna is always diving and surfacing in the ocean of spiritual happiness. The Vedas explain that one drop of this happiness is millions of times greater than the paltry relish afforded by material sense gratification or even the pleasure derived from liberation from material existence. A pure devotee never depends on the accumulation of material possessions for his happiness. He accepts only what is necessary to perform devotional service and maintains full awareness that these facilities are actually the property of the Lord.

During Srila Prabhupada’s years Spent in Vrndavana preparing for his eventual journey to the West, he lived very simply in a tiny room in the courtyard of the Radha-Damodara temple. Alter preaching vigorously in the West for a number of years, Srila Prabhupada had access to much opulence, yet he never claimed any of it as his own and used every penny in the service of Krsna. 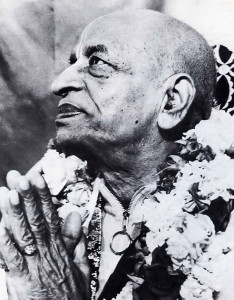 One is said to be desireless when his only interest lies in satisfying the transcendental senses of Lord Krsna. Desires are eternally flowing like a river from the heart of the living entity, and the process of Krsna consciousness can change the quality of those desires from material to spiritual.

Although Srila Prabhupada began his preaching work very humbly, his mission became enormously successful, and Krsna blessed him with great opulence. When a person acquires great amounts of wealth and power, he usually becomes thoroughly attached and polluted due to the strong force of his material desires. Srila Prabhupada, however, remained aloof from this contamination because of his complete absorption in the desire to please Krsna.

Because a pure devotee of Lord Krsna is desireless, he is naturally indifferent to material acquisition. Material facilities may come and go, but that does not concern him in the least.

Srila Prabhupada once pointed out that if he had simply sat beneath a tree and preached, very few people would have come to listen. Therefore, to effectively deliver the message of Lord Krsna, he constructed beautifully ornate temples. At no time, however, was he desirous of settling in comfortably to enjoy these facilities, choosing instead to follow a rigorous schedule of traveling and preaching that even the youngest and healthiest of his disciples could not keep pace with.

When Srila Prabhupada was instructed by his spiritual master to preach Krsna consciousness in English, he took his order as his life and soul and fixed his determination upon carrying it out diligently. Founding the Back to Godhead magazine in 1944, Srila Prabhupada single-handedly attended to its publication and distribution for many years, never once deviating from his sincere effort to please his spiritual master. As a result of Srila Prabhupada’s fixed determination, all of his preaching activities were crowned with glorious success, and even now, in his physical absence, his followers carry on his work all over the world. 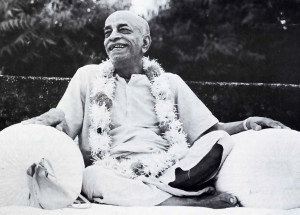 Srila Prabhupada’s humility was inconceivably deep and heartfelt, and it inspired a generation of young men and women, who had based their lives on the rejection of authority, to willingly accept his authority. Srila Prabhupada never took credit for his many successes, always preferring to acknowledge his spiritual master, Srila Bhaktisiddhanta Sarasvati Thakura, and the assistance given to him by his disciples.

During one lecture, Srila Prabhupada touched the hearts of his disciples when he stated that he considered them to be representatives of his spiritual master, sent to assist him in his preaching mission. By this expression of sincere gratitude, Srila Prabhupada displayed his mood of devout humility. Anyone pursuing the spiritual path should aspire to follow in his footsteps in this regard.

Srila Prabhupada once explained to a group of his disciples that a devotee of Lord Krsna is always grave. Upon hearing this, one devotee, a very colorful and effusive person, decided to tone down his disposition and became straight-faced in an attempt to please his spiritual master. After a few days of this behavior by his disciple, Srila Prabhupada looked at him quizzically and asked what was the matter. The disciple replied that he was trying to be grave.

At that, Srila Prabhupada laughed and explained to him that being grave means to be serious about Krsna consciousness. It has nothing to do with artificially repressing one’s individuality. Srila Prabhupada himself was a most vibrant personality. His life abounded with laughter and spiritual enjoyment, yet he was always serious about Krsna consciousness. He never forgot Lord Krsna, not even for a moment, and in this way displayed perfect gravity. 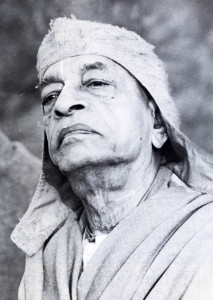 In the Bhagavad-gita Lord Krsna states that He is the friend of all living beings. As the Lord’s intimate associate, Srila Prabhupada also displayed friendship to all by dint of his constant engagement in spiritual welfare activities. In the material world friendships are formed on the basis of mutual sense gratification, and when sense gratification is disturbed, the relationship is either damaged or discontinued.

Srila Prabhupada was a true friend to all, however, because he formed relationships with others motivated by his unalloyed desire to assist everyone in achieving the highest goal of life. He never desired to exploit anyone, and if there was ever an offense committed against him or some difficulty caused by others, he never took it seriously.

The scriptures state that if a disciple commits a sinful activity, the spiritual master suffers. Srila Prabhupada, out his causeless mercy, accepted thousands of disciples, and because of their inevitable transgressions he had to undergo what appeared to be suffering. In spite of this, he never withdrew his mercy and friendship. Significantly, he always closed his letters to his disciples with the words “Your ever well-wisher.”

The spiritual friendship of a pure devotee like Srila Prabhupada is the rarest of gems, and it behooves us all appreciate, revere, and guard it as our life’s dearest treasure.