Back to Godhead > Prabhupada > Nobel Prizes for Fools 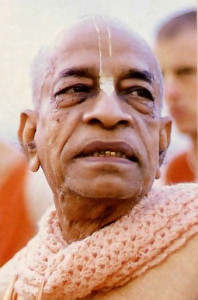 The following conversation between His Divine Grace A.C. Bhaktivedanta Swami Prabhupada and some of his disciples took place in June 1974 during an early-morning walk in Geneva.

Srila Prabhupada: All the big leaders in the world are foolishly thinking they are independent. They are just like the dog who forgets that he is controlled by his master. The dog doesn’t know he’s controlled. He’s thinking, “I am now free. Rau! Rau! Rau!” But then with a little pull of the chain, the master stops all his nonsense.

Devotee: Especially in the Western countries, Srila Prabhupada, people don’t like to think they are controlled.

Srila Prabhupada: Therefore they are rascals. Krsna directly says, ahankara vimudhatma kartaham iti manyate: “The fools and rascals think ‘I am doing everything.'” One is controlled at every step, yet he is thinking, “I am doing everything.” Therefore he is a rascal. In spite of his big, big house, his nice road and good car, he is a rascal. He thinks he is independent, that he will not die, but as soon as maya [the material energy] kicks on his face, he must die. Immediately. He may protest, “I have still got some business to do!” but maya says “No, no, sir, you must die immediately.” And he thinks he is not controlled. What is this nonsense?

So, real knowledge is to understand, “In spite of all my so-called advancement of civilization, I am controlled.” That is the beginning of knowledge. Then we should think how to get out of this control. But if we think, “I am not controlled,” then we are no better than the cats and dogs. That is explained in the Bhagavad-gita. Prakrteh kriyamanani: by prakrti, by the material nature, one is pulled by the ear—”Come here!”

As soon as you eat a little more than you require, maya says,’ “You must fast for three days.” And you are not controlled? Just see how foolish these people are. And they are getting the Nobel Prize.

Devotee: No one has ever gotten the Nobel Prize for saying, “Yes, we are all controlled.”

Srila Prabhupada: This is because the men who are awarding the Nobel Prize are also rascals. It is a society of fools and rascals. Therefore my Guru Maharaja [spiritual master] used to say, “This is a society of the cheaters and the cheated.”

Devotee: I have prepared an argument this morning.

Srila Prabhupada: What is that?

Unfortunately, you are thinking you are independent. That is your rascaldom. You should always think, “I must be conditioned. That is my constitutional position in life.” In the Bhagavad-gita Krsna says, mahatmanas tu mam partha daivim prakrtim asritah: “The great souls, the mahatmas, are under My spiritual nature.” So the devotees are still conditioned: they are under Krsna’s spiritual nature (daivi prakrti).

First of all we must understand that our natural position is to be conditioned.

Now, by whom shall we be conditioned?

Krsna says, sarva-dharman parityajya mam ekam saranam vraja: “Become conditioned by Me; surrender to Me. Then you will be happy.” Those who are thinking, “We shall not be conditioned” are in maya [illusion]. The Vedas say, nityo nityanam cetanas cetananam eko bahunam yo vidadhati kaman: “Among all the eternal living beings, one is supplying all the rest with their necessities of life.” So God is supplying us with the necessities of life. Therefore we should recognize that we are living under His control and serve Him. Suppose you are giving me all my necessities of life. Shouldn’t I reciprocate by rendering some service to you?

No one can be independent; it is not possible. These rascals are putting forward a wrong philosophy—this idea of “complete independence.” They are simply becoming more and more conditioned by Krsna’s external, material energy.

Devotee: Their idea is that since our problems come from the wrong kind of conditioning during childhood, we should be given the opportunity in childhood of a good family, a good education, and soon, and in that way there won’t be a bad reaction later on in life.

Srila Prabhupada: That means a child should be given the chance for better conditioning. But conditioning must go on. If they say, “Let the child be given freedom!” they are fools.

Devotee: They say that the child can have freedom when he receives good conditioning.

Devotee: So in other words, your idea is to give people a better conditioning?