Krsna’s Blessings In the Chanting of His Name

The Hare Krsna movement has just arrived in Great Britain. And a gathering
of Londoners interested in the movement listens to this message recorded for them
by His Divine Grace A.C. Bhaktivedanta Swami Prabhupada,
Founder-Acarya of the International Society for Krishna Consciousness. 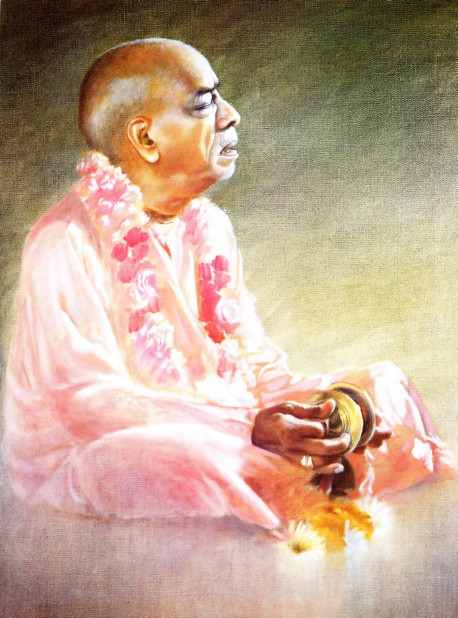 Ladies and gentlemen: Please accept my greetings for the happy new year of 1969. and please accept the blessings of Sri Krsna, the Supreme Personality of Godhead, for your kindly participating in this happy meeting of Krsna consciousness.

Lord Caitanya’s special gift to the fallen souls of the Age of Quarrel and Disagreement is to induce people in general—the religionists, the philosophers, everyone—to take to the chanting of the holy name of Krsna. Lord Caitanya informed us that the Absolute Supreme Personality of Godhead can descend in transcendental sound and that when we chant the Hare Krsna mantra offenselessly we immediately contact Krsna in His internal energy. Thus we immediately become purified from all the dirty things in our heart.

Our conditioned life of material exist is due to dirty things in our heart.

Originally we are all Krsna conscious living beings, but because of our long association with matter, we have been transmigrating from one form of body to another, suffering in the cycle of birth and death in various species of life (numbering 8,400,000). Every one of us, although originally a spiritual soul and therefore qualitatively one in constitution with the Supreme Lord, Krsna, has identified with our material body. Thus we are being subjected to various material pangs, specifically birth, old age, disease, and death.

The whole material civilization is a hard struggle against birth, old age, disease, and death. Against these perpetual problems human society is struggling fruitlessly in many ways. Some people are making material attempts, and some are making partially spiritual attempts. The materialists are trying to solve the problems through scientific knowledge, education, philosophy, ethics, literature, and so on. The salvationists are trying to solve the problems by putting forth various ways of discerning matter from spirit. And some people are trying to overcome birth and death through mystic yoga.

But all of these people—the materialists, the salvationists, and the yogis—must know it for certain that in this Age of Kali, the Age of Quarrel and Dissension, there is no possibility of success without accepting the process of Krsna consciousness.

Srila Sukadeva Gosvami, the speaker of Srimad-Bhagavatam, has therefore recommended that whether you are a fruitive worker, a salvationist, or a mystic yogi, if you actually want to be freed from the pangs of material existence you must take to the process of chanting Hare Krsna, Hare Krsna, Krsna Krsna, Hare Hare/ Hare Rama, Hare Rama, Rama Rama, Hare Hare.

Krsna consciousness is the art of purifying our heart of the dust of material desires. As living entities we have desire as a component part of our constitution. Therefore we cannot stop desiring. But we can purify our desire. Killing desire is no solution, but curing desire—the diseased condition of desire—is the right solution. And when the dust of misunderstanding is cleared from our heart, we can see our real position and make steady progress toward the ultimate goal of life.

Lord Sri Caitanya Mahaprabhu never recommended that one change his position in life. Rather, He favored the process of staying in one’s position and hearing about Krsna from a bona fide source. To arrive at the real goal of life, one should give up the artificial process of philosophical speculation and instead submissively hear about the philosophy of Krsna consciousness, which is contained in Vedic literatures such as Srimad Bhagavad-gita and Srimad-Bhagavatam. If one submissively chants the maha-mantra (Hare Krsna, Hare Krsna) and hears without any misinterpretation the message of Krsna as it is given in Bhagavad-gita, then one does not have to change his position by some artificial method. Simply by chanting and hearing about Krsna, you will come to the transcendental position, in which you can know God—His name, His form, His qualities, His pastimes, His paraphernalia, and so on.

We are, however, misled at present by leaders who have very little connection with God, or Krsna. Some of them deny the existence of God. Some of them try to put themselves in God’s place. Some of them, utterly hopeless and frustrated at being unable to reach any right conclusion, think the ultimate goal of life is void, or zero. But Krsna consciousness is solid ground for understanding God directly by the simple method of chanting His holy name.

Misled by spiritually blind leaders, people in general, who themselves are spiritually blind, have failed to achieve their desired success. But here is a method, Krsna consciousness, that is directly offered by Krsna. He plainly gave us His instructions five thousand years ago in the Bhagavad-gita, and He confirmed them five hundred years ago in the form of Lord Caitanya.

So the Krsna consciousness movement is a great art of life, very easy and sublime.