Presidents of the North American Hare Krsna centers at their recent two-day conference in Washington, D.C.

Washington, D.C.—On October 28, the presidents of the North American centers of the Hare Krsna movement gathered here for a two-day conference to share in spiritual fellowship—and to share ideas about how to foster Krsna consciousness in their local areas.

The movement has fifty-seven centers in the United States and Canada.

Each of the temples of ISKCON, the International Society for Krishna Consciousness, is separately constituted, with its own president, vice-president, and secretary.

Each temple is, in effect, a separate spiritual community, and the head of each community is the temple president. He is a spiritual leader who teaches and counsels devotees, and he organizes the work of the temple, coordinating who does what, where, and when.

He makes sure the silver on the altar gets polished, the flower garlands get made on time, the cars repaired, the account books balanced, guests courteously received. He sees to it that the temple community properly observes the many sacred festivals throughout the year. And he’s also the one who leads the devotees in their work of spreading Krsna consciousness by distributing Krsna conscious books, chanting Hare Krsna, and giving out prasadam, sanctified food.

The temple presidents, in turn, are responsible to the society’s Governing Body Commission, whose two dozen members, each in a different part of the world, have the duty of keeping ISKCON straight on the spiritual course set for it by ISKCON’s Founder-Acarya, His Divine Grace A.C. Bhaktivedanta Swami Prabhupada. 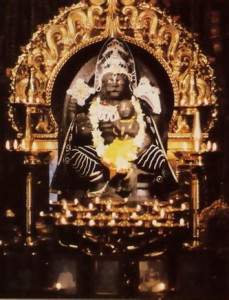 The Deity of Nrsimhadeva. Lord Krsna’s form as half-man, half-lion, sits triumphantly on His throne in the Hare Krsna temple in West Germany’s Bavarian Forest.

The Bavarian Forest, West Germany—Millions of years ago, Lord Krsna appeared on earth in His fierce form of Nrsimhadeva (half-man, half-lion) to protect His dear devotee Prahlada from his demonic father’s depredations. Now, for the first time outside India, a Deity of Lord Nrsimhadeva has been formally installed in a temple—the temple at Nava-Jiyada-Nrsimha-Ksetra, the Hare Krsna farm deep in the Bavarian Forest.

For three days devotees from the United States, India, Argentina, and Germany and several other European countries held an elaborate installation ceremony, complete with a fire sacrifice and a formal bathing of the Deity. Australian-born Gaura-Kesava dasa, a brahmana priest fully trained in southern India, performed the sacred ceremonies strictly in accord with scriptural regulations. And Srila Harikesa Swami, who oversees the society’s affairs in northern, central, and eastern Europe, personally bathed the Deity.