Back to Godhead > Prabhupada > The Soul in Matter: A Fish out of Water

The Soul in Matter: A Fish out of Water

The Soul in Matter: A Fish out of Water 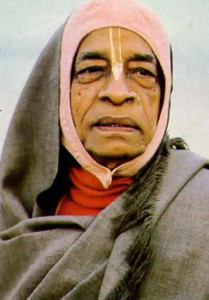 This conversation between His Divine Grace A.C. Bhaktivedanta Swami Prabhupada, one of his disciples, and an Indian lawyer took place in August 1976 on an early-morning walk in Hyderabad, India.

Srila Prabhupada: At the present moment nearly everyone is in darkness. Na te viduh svartha-gatim hi visnum: they do not know that the goal of life is to know Visnu, or Krsna. Out of ignorance they are accepting this material life as everything. But they are forgetting about the problems of birth and death. These are their real problems. They are making plans to solve so many problems, but they have no plan to solve these problems.

Lawyer: Is it possible, then, for us to conquer death?

Lawyer: And in that case there would be no death and no rebirth?

Srila Prabhupada: Yes. You are eternal, and your original home is in the spiritual world. But by karma you are put into this material world. Then you must struggle, like a fish out of water. If somehow or other a fish is taken from the water and put onto the land, his life is simply a struggle. And if he is again put into the water, his life is in its natural condition.

Lawyer: So for us the natural condition is back to Godhead?

Lawyer: It’s a mystery, though, how we came from the divine life to this life.

Devotee: It is simply our karma.

Lawyer: But we must start somewhere.

Lawyer: But if the soul was once a gentleman—

Srila Prabhupada: The soul is eternally a gentleman.

Lawyer: Ahh. But is the soul who takes birth as an animal also a gentleman?

Srila Prabhupada: Yes. He is a gentleman by nature, but a criminal by artificial means. As soon as—

Lawyer: But suppose you attain moksa [liberation]. Is that the same as returning to the spiritual world?

So, the moksa of the impersonalists is temporary because although they think that by merging into the impersonal Brahman they will be happy, they cannot be happy there. Aruhya krcchrena param padam tatah patanty adhah: although they go up to the impersonal Brahman effulgence, because there is no ananda [spiritual pleasure] they come down again to find pleasure in the material world. By nature the living entity seeks pleasure (anandamayo ‘bhyasat). But you do not get any ananda in the Brahman effulgence.

Srila Prabhupada: No. It is eternal existence, but no ananda. Can you remain eternally without pleasure? No, so you have to come back down again to this material world, because here there is something like ananda, although the pleasure here is temporary. So unless you go to God and dance with Him, you’ll have to come back to this world. But the impersonalists cannot reconcile how God can be a person and not have to suffer birth and death like them. Because they have had a very bad experience of being a person here, they think the Absolute must be impersonal in order to be perfect. They are mudhas, fools; they are not intelligent.

Lawyer: But what is the stage at which the atma [the soul] merges with the paramatma [the Supersoul]?

Srila Prabhupada: That I have already explained: you cannot merge. You may simply imagine you are merging. You can enter into the spiritual atmosphere, but without ananda you cannot stay there. Therefore you have to come back again to this material world. Suppose you are put in some place where you cannot practice law. How long will you remain there? If I say, “Please remain here happily without any law practice,” how long could you remain? You will want some activity, some pleasure. That is your nature.

So, here in the material world we are all trying to get some pleasure, but that pleasure is temporary. It is not satisfying us. Therefore, being disgusted, we want to stop material life and merge into Brahman. But that life is also temporary. Unless you go back home, back to Godhead, there is no complete life. Therefore Krsna comes and shows by His spiritual activities how to enjoy real ananda. He plays with the cowherd boys, He dances with the cowherd girls, He kills the demons—He performs so many activities. This is ananda. You have read our Krsna Book? [Krsna Book, or Krsna, The Supreme Personality of Godhead, is Srila Prabhupada’s summary study of the Tenth Canto of Srimad-Bhagavatam, India’s greatest spiritual classic.] Krsna’s activities are described there in detail. We are trying to give people real knowledge from the sastra [scriptures]. Now it is up to them to take advantage of it.