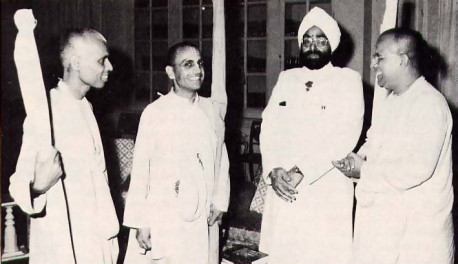 New Delhi—Recently the president of India, His Excellency Sri Giani Zail Singh, cordially received three leaders of the Hare Krsna movement. They are Srila Gopala Krsna Goswami, who oversees the affairs of the movement in western India and Canada and who is one of the movement’s present spiritual masters; His Holiness Lokanatha Swami, president of the Hare Krsna center in New Delhi; and His Holiness Nava-yogendra Swami, president of the center in Chandigarh, India. They gave President Singh a set of Srila Prabhupada’s books in Hindi and a painting of Lord Krsna, both of which he gladly accepted.

President Singh commended the Hare Krsna movement for its work in India and abroad, and he especially applauded the movement’s scriptural basis. “Whereas modern-day Indians are turning to materialistic philosophers of the West,” he said, “your people are sticking to the ancient scriptures of the Vedic tradition. I think this is a source of strength for your movement.”

Manipur, India—Two new gurukula schools have been opened in India by Srila Bhaktisvarupa Damodara Swami, one of the Hare Krsna movement’s present spiritual masters and the director of the Bhaktivedanta Institute, a group of devotees with academic degrees who investigate the nature and origin of life and consciousness from the Vedic perspective.

Christian missionaries in Imphal, Manipur, are concerned because many parents are preparing to withdraw their children from mission schools and enroll them in the new gurukula there. For 188 positions, the school has already received applications for more than four hundred students. When construction on the three-story school is completed in January, all the applicants will be admitted.

In Tirupati, a pilgrimage site in the south Indian state of Andhra Pradesh, Srila Bhaktisvarupa Damodara Maharaja has opened a gurukula with an initial enrollment of two hundred. Within a decade he plans to expand the school to include a multifaceted college program. A 22-member panel that includes Tirupati’s leading citizens oversees the school’s affairs.

Westminster, Great Britain—Westminster Abbey was recently the site of an ecumenical dialogue featuring an address by Srila Bhagavan Goswami, one of the present spiritual masters in the Hare Krsna movement. He officially represented England’s two million Hindus.

Leading life members of the movement and The Very Reverend Dr. Edward Carpenter, Dean of Westminster Abbey, sponsored the dialogue to give British clergymen a broader understanding of Krsna consciousness and its role in English society. The theological assembly was part of Britain’s summer-long Festival of India, a series of events co-patroned by Prime Ministers Margaret Thatcher and Indira Gandhi.

Dean Carpenter warmly praised Srila Bhagavan Maharaja, expressing deep appreciation for his presentation of Vedic philosophy and commenting on his “superb handling of all questions raised.”

After Srila Bhagavan spoke, the ninety conferees enjoyed a sumptuous feast of prasadam (food offered to Krsna) and performances of devotional Indian dance and song—all arranged by the devotees. Finally, the devotees led the congregational chanting of Hare Krsna.

Book on Reincarnation, Two Others Published

In Brazil, the Portugese BBT has published two new books: O Livro de Solucoes (A Book of Solutions), featuring a conversation between Srila Hridayananda dasa Goswami and the Dom Elder Camara, Archbishop of Recife, Brazil, and Illumincao pelo Camino Natural (Enlightenment from the Natural Path), which consists of excerpts from Srila Hridayananda Maharaja’s English translation of the Eleventh Canto of Srimad-Bhagavatam.