Back to Godhead > ~Featured~ > The Lord of the Universe Comes to Washington D.C.

The Lord of the Universe Comes to Washington D.C.

The Lord of the Universe Comes to Washington 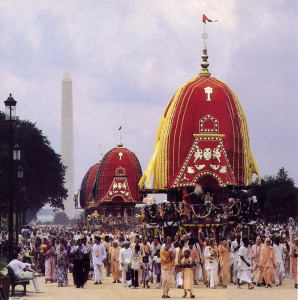 Regally enthroned on the lead chariot, Jagannatha, Lord of the Universe, rides in procession from the Washington Monument to the Capitol

It wasn’t a protest. It wasn’t a vigil. It wasn’t a political demonstration. Instead of “Down with …” or “Hell no …” or “We want …” they chanted “Hare Krsna, Hare Krsna …” Said one policeman to a visitor, “You know, most groups who come here, they come to complain about something. It’s nice to see a celebration for a change.”

It was the first annual Ratha-yatra chariot festival in Washington, D.C. By the hundreds, the Hare Krsna devotees came from around the country, and some from as far away as India, and at the foot of the Washington Monument thousands of well-wishers, friends, and onlookers joined them for the parade to the Capitol.

The devotees came to Washington to raise their voices in praise of Jagannatha, Lord of the Universe; they came to give out thousands of plates of delicious, sanctified vegetarian food; and they came to display the rich culture of Krsna consciousness through music, drama, literature, art, photos, and a full-fledged Vedic museum.

Marion Barry, Jr., mayor of the District of Columbia, declared August 21 Ratha-yatra Day. He called the two-day festival “exciting, impressive, and colorful.” And noting the presence of “more than 20,000 people of East Indian origin in the metropolitan area, who have made impressive contributions to the life of the city,” Mayor Barry declared “that the Ratha-yatra Festival not only encourages understanding and cooperation and promotes peace, but it also adds considerably to the international character of our city.” The mayor said, “I therefore call upon all people of goodwill to support this worthy endeavor.” 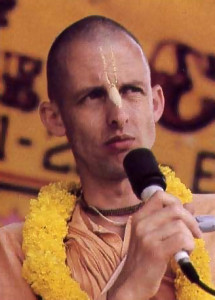 Srila Satsvarupa dasa Goswami, one of the present spiritual masters in the Hare Krsna movement and the chief coordinator of the event, explained its significance: “By the grace of our spiritual master, His Divine Grace A.C. Bhaktivedanta Swami Prabhupada, we have brought this Ratha-yatra festival, this occasion for remembering God, to Washington, D.C. In Jagannatha Puri, India, devotees have celebrated Ratha-yatra annually for thousands of years. But five hundred years ago Ratha-yatra was given a great impetus by a divine incarnation named Lord Caitanya, who appeared in Bengal. 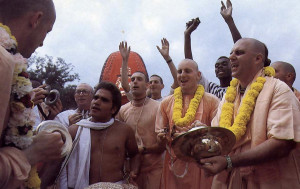 Whether with his huge
brass “whompers”

“Lord Caitanya took the role of a pure devotee of Krsna, and He personally took part in the ecstatic chanting and dancing of the Ratha-yatra procession at Puri. By His own example and His teachings, Lord Caitanya emphasized the chanting of the holy names of God as the easiest method for reaching spiritual perfection in this age. Chanting Hare Krsna reveals to us the nature of transcendental bliss, the unlimited, unending pleasure we each have dormant within us. 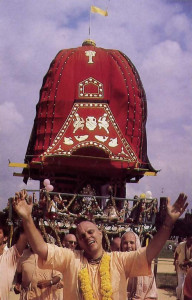 or his ecstatic dancing, Srila Jayapataka Swami (a Hare Krsna guru from India) adds an infectious exuberance to the parade.

“Now, the process of chanting God’s names taught by Lord Caitanya is not meant for a limited group of people. It is not a sectarian religious practice but the pure dynamic principle of devotional love of God, and it can be practiced by any person of any religious background anywhere in the world. As Lord Caitanya said, ‘O My Lord, You have thousands and millions of names, and all of them are full of Your transcendental potencies.’ So you may chant any bona fide name of God you find in your own scripture, and in this way you can associate directly with Him and become purified.

“So let us hope that today’s Ratha-yatra in Washington, D. C., is the beginning of a spiritual transformation of this country, and the world. America should not be the world leader simply in weapons production. She should be the leader in God consciousness. 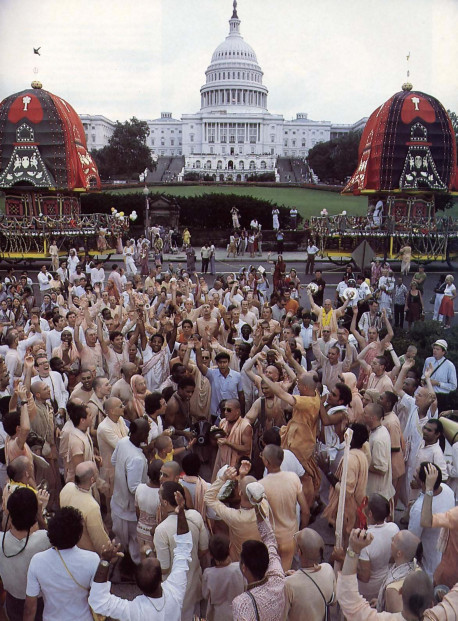 one of the leaders of the Hare Krsna movement (His Holiness Prabhupada-krpa Goswami, at center with sunglasses) leads the devotees in a crescendo of chanting before the Capitol.