Back to Godhead > Prabhupada > Where Is Your Love For God?

Where Is Your Love For God?

Where Is Your Love For God? 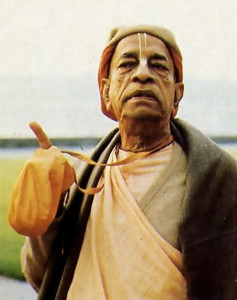 The following conversation between His Divine Grace A.C. Bhaktivedanta Swami Prabhupada and some of his disciples took place on an early-morning walk in April 1974 in Hyderabad, India.

Srila Prabhupada: How do you instruct the people in general?

Devotee: I try to follow what Lord Caitanya taught, and what is taught in all Vedic literature: that people should understand their relationship with God, learn how to act in that relationship, and know that the goal of life is to come to the stage of pure love of God. So we acquaint people with the principles of devotional service and tell them how they can practice it.

Srila Prabhupada: But people will say, “We have not forgotten God. We go to church regularly. So how have we forgotten God?”

Devotee: Well, we don’t encourage them to change their religion—

Devotee: Because they’re not actively serving Him. We see that some people say they are theists but they don’t do any practical service for God.

Srila Prabhupada: But what is the meaning of service?

Devotee: Service means acting in a relationship of love. But people are simply serving their stomachs—

Srila Prabhupada: “But if I haven’t got love for God, why am I coming to church?”

Devotee: We are educating them about who God is. They go to church, but they don’t know who God actually is.

Srila Prabhupada: “Whatever He may be, when I offer my prayers I remember God. I don’t have a clear idea, but I have my own conception of God.” So, what is the answer?

Devotee: But there are symptoms of service to God. We don’t discourage Christians from worshiping God in church, but if they’re actually serving God they should show symptoms of developing love of God.

Srila Prabhupada: Yes. That is already answered: “If I haven’t got love for God, why am I coming to church? I could use the time I spend in church to earn some money.”

Devotee: But love is not based on sentimentality. Love is practical. We can judge how much a man is developing love for God by what his activities are.

Srila Prabhupada: “So what have you found in me that lets you conclude I have no love for God? What have you seen in me?”

Devotee: You go to church for only one hour all week.

Srila Prabhupada: “That may be—

Devotee: The rest of the time is not spent serving God.

Srila Prabhupada: “But that does not mean I do not love God.”

Devotee: We are spreading love of God all over the world to people who have not developed that love, so if you have love for God you should willingly support this work.

Srila Prabhupada: But the Christians are also preaching. The Christian “missionaries will say, “We are going all over the world. We have made so many Christians. So why do you say that you are better than us? We are doing the same thing as you.”

Devotee: If a person has love of God, though, his love is not simply confined to his own work. God is one, so why not help us?

Srila Prabhupada: “No, no. We are already preaching Christianity all over the world. The number of Christians is greater than the number of Krsna devotees. Our preaching is better than yours.”

Devotee: We are only requesting you to chant Hare Krsna.

Srila Prabhupada: “That is only a process. You are requesting people to chant Hare Krsna; we are requesting them to pray: ‘Give us our daily bread.’ Your process is chanting; ours is prayer. So, there is no difference.”

Devotee: But when we chant Hare Krsna, we are praying to God, “Please let me serve You.”

Srila Prabhupada: “That is already settled. We are also serving: we are preaching Christianity.”

Devotee: But we are serving twenty-four hours a day.

Devotee: It has already been predicted in the sastra, the Vedic scriptures, that this method of chanting the holy name of God will be accepted by everyone.

Srila Prabhupada: “That may be in your sastra, but we follow our Bible. We go to church and sing hymns.”

Srila Prabhupada: “No. I know in my own way.”

Devotee: They may give all these arguments, but we see that most Christians do not even follow the teachings in their own Bible.

Srila Prabhupada: Here you have come to the real point. If you love God, then why do you disobey Him? Your disobedience means that you do not love God. Jesus Christ says, “Thou shalt not kill.” Then why are you killing so many millions of cows in the slaughterhouses? This is the charge I give to the Christians.

Devotee: But they say, “We are allowed to kill animals. Besides, I accept Christ as my saviour; therefore I’m saved. I’m following Christianity closely.”

Srila Prabhupada: No, no. If you love God, then why are you disobeying His order? There is an open declaration by Jesus Christ: “Thou shalt not kill.” But you are deliberately disobeying him. So where is your love for God?