Back to Godhead > Devotees > Preaching > Yoga > Transcendental Meditation Through Sound

In 1969, soon after “transcendental meditation” first caught the fancy of people in America, His Divine Grace A.C. Bhaktivedanta Swami Prabhupada, Founder-Acarya of the International Society for Krishna Consciousness, gave this talk at Boston’s Northeastern University.

My dear boys and girls, I thank you very much for attending this meeting. We are spreading this Krsna consciousness movement because there is a great need of this consciousness throughout the world. And the process is very easy—that is the advantage.

This bodily standard of conditioned life is called the sensual platform, because as long as we have a bodily conception of life we think happiness means sense gratification. That’s all. This bodily concept of life is very prominent at the present moment—not only at the present moment, but since the creation of this material world. That is the disease: “I am the body.” 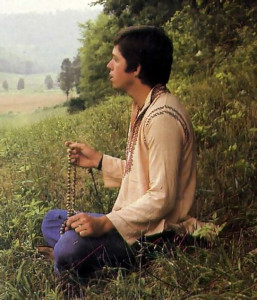 Srimad-Bhagavatam says, yasyatma-buddhih kunape tri-dhatuke: thinking we are the body means we have a concept of our self as a bag of skin and bones. The body is a bag of skin, bones, blood, urine, stool, and so many other nice things. So when we think, “I am the body,” we are actually thinking, “I am a bag of bones and skin and stool and urine. That is my beauty; that is my everything.” So this bodily concept of life is not very intelligent, and improvement of the body is not a right calculation of self-realization.

Those who are too engrossed with the bodily concept of life are recommended to practice the dhyana-yoga system, the yoga of meditation. That is mentioned in the Srimad-Bhagavad-gita. In the Sixth Chapter, verses 13 and 14, Krsna explains, “One should hold one’s body, neck, and head erect in a straight line and stare steadily at the tip of the nose. Thus, with an unagitated, subdued mind, devoid of fear, completely free from sex life, one should meditate upon Me.”

Earlier Lord Krsna gives preliminary instructions on how one should practice this transcendental meditation. One has to restrict sense gratification, especially .sex. One has to select a very solitary place, a sacred place, and sit down alone. This meditation process is not practiced in a place like this, a big city, where many people are gathered. One must go to a solitary place and practice alone. And then you have to carefully select your sitting place, you have to sit in a certain way . . . There are so many things. Of course, those things cannot be explained within a few minutes. If you are very much interested, you’ll find a full description in Bhagavad-gita, in the chapter called “Dhyana-yoga.” 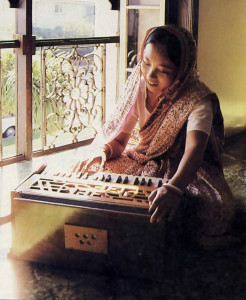 And what does joyful mean? That is also explained: na socati na kanksati. Someone on the transcendental platform does not hanker after anything, nor does he lament. On the material platform we have two symptoms: hankering and lamenting. The things we do not possess we hanker after, and the things we have lost we lament for. These are the symptoms of the bodily concept of life. 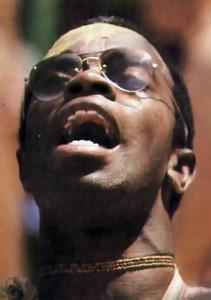 But in this Age of Kali, where everyone is disturbed, always full of anxieties, and where life is very short, people are generally not interested in any transcendental subject matter. They are interested only in the bodily concept of life. When one is always disturbed by so many anxieties, how can he ascend to the platform of transcendental realization? It is very difficult in this age. It was difficult even five thousand years ago, when Arjuna took instruction on meditation from Krsna in Bhagavad-gita. Arjuna was a royal prince; he was very much advanced in so many ways. Yet on the Battlefield of Kuruksetra he said, “My dear Krsna, it is not possible for me to practice this transcendental meditation, this dhyana-yoga process. I am a family man; I have come here to fight for my political interest. How can I practice this system, in which I have to go to a solitary place, I have to sit down, I have to cease from sex? It is not possible.” Arjuna was so much more qualified than we are, yet he refused to practice this meditation process. 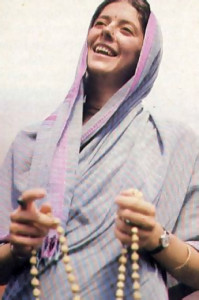 So here, in this age, if you want to rise to the transcendental platform, then you must follow the recommendations of the Vedic literature: kalau tad dhari-kirtanat. In this age, simply by chanting the holy name of God one can reach all perfection. We are not introducing this chanting system by our mental concoction, to make things very easy. No, Lord Caitanya Mahaprabhu introduced this process of transcendental meditation five hundred years ago. Also, the Vedic literature recommends it, and it is practical. You have seen that my disciples, these boys and girls, immediately experience a transcendental feeling as soon as they begin chanting Hare Krsna. If you practice, you will also see how you are rising to the transcendental platform. So chanting Hare Krsna, Hare Krsna, Krsna Krsna, Hare Hare/ Hare Rama, Hare Rama, Rama Rama, Hare Hare is the easiest process of transcendental meditation.

This transcendental sound vibration will immediately carry you to the transcendental platform, especially if you try to hear so that your mind is absorbed in the sound. This Hare Krsna sound vibration is nondifferent from Krsna, because Krsna is absolute. Since God is absolute, there is no difference between God’s name and God Himself. In the material world there is a difference between water and the word water, between a flower and the word flower. But in the spiritual world, in the absolute world, there is no such difference. Therefore, as soon as you vibrate Hare Krsna, Hare Krsna, you immediately associate with the Supreme Lord and His energy.

You haven’t got to change your situation. If you are a student, remain a student. If you are a businessman, remain a businessman. Woman, man, black, white—anyone can chant Hare Krsna. It is a simple process, and there is no charge. We are not saying, “Give me so many dollars, and I shall give you this Hare Krsna mantra.” No, we are distributing it publicly. You simply have to catch it up and try it. You’ll very quickly come to the transcendental platform. When you hear the chanting, that is transcendental meditation.

This process is recommended in all the scriptures of Vedic literature, it was taught by Lord Caitanya and followed by His disciplic succession for the last five hundred years, and people are achieving good results from it today, not only in India but here also. If you try to understand what this Krsna consciousness movement is, you’ll understand how transcendental meditation is possible. We are not sentimentalists; we have many books: Bhagavad-gita As It Is, Srimad-Bhagavatam, Teachings of Lord Caitanya, Isopanisad. And we have our magazine, BACK TO GODHEAD. It is not that we are sentimentalists. We are backed up by high philosophical thought. But if you take up this simple process—chanting Hare Krsna, Hare Krsna, Krsna Krsna, Hare Hare/ Hare Rama, Hare Rama, Rama Rama, Hare Hare—you are immediately elevated to the transcendental platform, even without reading so much philosophical literature. This Hare Krsna mantra is Lord Caitanya Mahaprabhu’s gift to the conditioned souls of the present age, in accordance with the Vedic sanction.

So our request is that you give it a try. Simply chant, at home or anywhere. There is no restriction: “You have to chant this Hare Krsna mantra in such-and-such a place, in such-and-such a condition.” No. Niyamitah smarane na kalah. There is no restriction of time, circumstances, or atmosphere. Anywhere, at any time, you can meditate by chanting Hare Krsna. No other meditation is possible while you are walking on the street, but this meditation is possible. You are working with your hands? You can chant Hare Krsna. It is so nice. 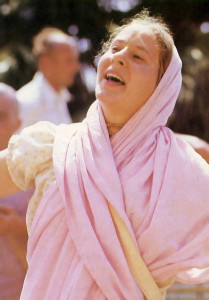 So the Hare Krsna mantra is not sectarian. Because we are chanting these three names—Hare, Krsna, and Rama—someone may think, “These are Hindu names. Why should we chant these Hindu names?” There are some sectarian people who may think like that. But Lord Caitanya says, “It doesn’t matter. If you have some other bona fide name of God, you can chant that. But chant God’s name.” That is the instruction of this Krsna consciousness movement. So do not think that this movement is trying to convert you from Christian to Hindu. Remain a Christian, a Jew, a Muslim. It doesn’t matter. But if you really want to perfect your life, then try to develop your dormant love for God. That is the perfection of life.

Sa vai pumsam paro dharmo yato bhaktir adhoksaje. You may profess any religion, but to test whether your religion is perfect, or whether you are perfect, you have to see whether you have developed your love for God. Now we are distributing our love among so many things. But when all this love is concentrated simply on God, that is the perfection of love. Our love is there, but because we have forgotten our relationship with God, we are directing our love toward dogs. That is our disease. We have to transfer our love from so many dogs to God. That is the perfection of life.

So we are not teaching any particular type of religion. We are simply teaching that you should learn to love God. And this is possible by chanting the Hare Krsna mantra.