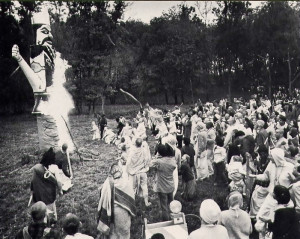 In a ceremony traditional throughout India, devotees and guests at a recent gathering in Washington. D.C .. destroy an effigy of Ravana, a demon who personifies evil in the Vedic epic Ramayana.

Potomac, Maryland—More than 1,500 devotees and guests gathered here recently to celebrate the installation of deity forms of Lord Ramacandra, His consort Sita, His brother Laksmana, and His servant Hanuman. For the United States this was the first formal installation of a Deity of Rama, an incarnation of Krsna who personifies perfect government leadership. The event included a bathing ceremony for the deities, a play, and a feast, and the climax came when everyone joined in burning an effigy of Ravana, a demon who once kidnapped Sita and perished at the hands of Rama. 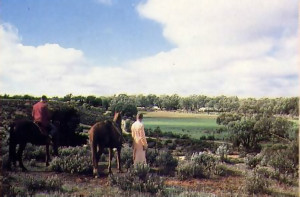 Horses are ideal for getting a round vast new Australian farm.

Riverina, Australia—The Australasian division of the Hare Krsna movement has acquired a spectacular farm in southeastern Australia. Lying on the Murray River about two hundred miles east of Adelaide, the farm has 15,000 acres (all of it arable), housing for fifty, and the largest shearing shed in south Australia (it’s made of foot-thick solid oak beams and can hold five hundred to six hundred sheep).

The farm is virtually a gift to the movement from a wealthy businessman, who had originally intended to develop it himself as a self-sufficient community, a refuge from a world he saw heading for war and economic collapse. But his plans failed to materialize, and he began looking for some people who could develop the kind of community he had in mind. Then one day he saw an energetic group of devotees chanting Hare Krsna in downtown Melbourne. Struck by their enthusiasm and purity, and recalling an impressive chance encounter with Srila Prabhupada in 1976 on a flight from Melbourne to Auckland, the businessman began to think the devotees might be the ones to develop his farm. After a few meetings with some leading Australian devotees, he was convinced.

Under the guidance of His Holiness Prabhupada-krpa Gosvami, who oversees the movement’s affairs in Australasia, the new farm promises to grow into a thriving center of spiritual life in a natural setting.

Kathmandu, Nepal—The devotees in the Kathmandu branch of the International Society for Krishna Consciousness now have two more books by His Divine Grace A.C. Bhaktivedanta Swami Prabhupada to distribute to the people of Nepal. The books are Sri Isopanisad (one of the 108 Vedic writings known as the Upanisads), which Srila Prabhupada translated from the original Sanskrit and explained with-extensive purports, and Beyond Birth and Death, a book comprising a series of lectures. The books, translated into Nepalese by Bhaktisiddhanta dasa, have won enthusiastic approval from the friends of the Hare Krsna movement in Nepal—chief of whom are the king and the royal family.