Srila Prabhupada Speaks Out on Education and The Good Life

On Education and The Good Life 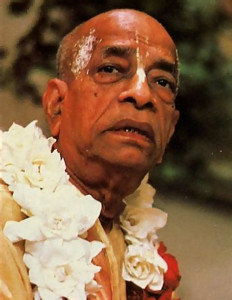 The following exchange between His Divine Grace A.C. Bhaktivedanta Swami Prabhupada, the mother of a new devotee, and a Jesuit priest took place in July 1973 at the Radha-Krsna temple in London.

Srila Prabhupada: [To the mother] According to our Vedic understanding, there are four pillars of sinful life: illicit sex, unnecessary killing of animals, intoxication, and gambling. Our students have been trained to give these up. And as you can see from your son, they are happy and satisfied by eating nice foods made from vegetables and milk and by chanting Hare Krsna, the holy name of God.

Mother: I see he’s happy. But, you know, he came from a very happy home, so he should be happy, shouldn’t he?

Srila Prabhupada: Our Krsna consciousness movement is not depriving people of their education. We say, “Go on with your university education, but side by side become competent to know God and to love Him. Then your life is perfect.”

But in any case, what is the purpose of education? Our Vedic culture teaches that the culmination of education is to understand God. That is education. Otherwise, the education for learning how to eat nicely; how to sleep nicely, how to have sex and defend nicely—this education is there even among the animals. The animals also know how to eat, how to sleep, how to have sex, and how to defend. These four branches of education are not sufficient for human beings. A human being must know how to love God—that is perfection.

Mother: Yes. I agree with you completely; I could mention a lot of brilliant men in science who are still very close to God. Where would we be without our scientists, without our doctors—

Srila Prabhupada: But simply to become a doctor in medical science will not save one. Unfortunately, most doctors do not believe in the next life.

Mother: Oh, yes they do. I know a doctor who comes to church every Sunday—and Michael knows him too. He believes in the next life; he’s a very good man.

Srila Prabhupada: Generally people in the West who believe in the next life do not believe in it very seriously. If they actually believed in the next life, they would be more concerned about what kind of next life they were going to have. There are 8,400,000 forms of life. The trees are a form of life, the cats and dogs are also forms of life, and the worm in the stool is also a form of life. So, all together there are 8,400,000 species. Since we are going to have a next life, since we have to leave our present body and take another body, our main concern should be what kind of body we are going to get next. But where is that university which educates its students to prepare for the next life?

Jesuit Priest: Catholic universities all over the world are doing that, and that’s our main purpose—to teach the young man or the young girl success in this world but, above all, success in the next, which means union with God for eternity. That’s top priority.

Srila Prabhupada: So, how can we know what kind of body we are going to have in our next life?

Priest: All I know is that there’s no annihilation. I’m going to be joined with God.

Srila Prabhupada: But what is the qualification for going to God? Does everyone go to God?

Priest: Everybody who believes in God and who leads a good life and does his best in this world—

Srila Prabhupada: Then the next question is, What is the good life?

Priest: Obeying the commandments of God.

Srila Prabhupada: One commandment is, Thou shall not kill. So if somebody kills innocent animals and eats them, is he leading the good life?

Priest: Father, you’re being a bit unfair, Thou shall not kill means “Thou shalt not unnecessarily take away life.” How would we be able to live if we didn’t eat meat?

Srila Prabhupada: How are we living? We are eating nice foods prepared from vegetables, grains, fruits, and milk. We don’t need meat.

Priest: Look at it this way. You just said a few minutes ago that there are eight million or so different kinds of life. Would you agree that the potato, the cabbage, and other vegetables also have life?

Priest: So when you boil those vegetables, you’re taking away their life.

Srila Prabhupada: What is your philosophy—that killing a potato and killing an innocent animal are equal?

Priest: You said, “Thou shalt not kill,” but you kill the potato.

Srila Prabhupada: We all have to live by eating other living entities: jivo jivasya jivanam. But eating a potato and eating some animal are not the same. Do you think they are equal?

Srila Prabhupada: Then why don’t you kill a child and eat it?

Priest: I wouldn’t for a second think of killing a child.

Srila Prabhupada: But animals and children are alike in that they both are helpless and ignorant; Because a child is ignorant, that does not mean we can kill him. Similarly, although animals may be ignorant or unintelligent, we should not kill them unnecessarily. A reasonable man, a religious man, should discriminate. He should think, “If I can get my food from vegetables, fruits, and milk, why should I kill and eat animals?” Besides, when you get a fruit from a tree, there is no killing. Similarly, when we take milk from a cow, we don’t kill the cow. So, if we can live in such a way without killing, why should we kill animals?

Priest: Would you say that because I eat meat and bacon and so on—does that make me sinful? If I didn’t eat those, I would be less sinful?

Priest: So if I give up eating meat and bacon and sausages, I would become a different person?

Srila Prabhupada: You would become purified.