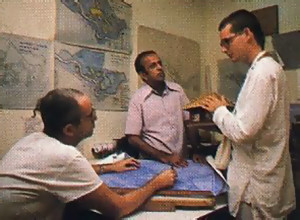 Murti dasa (left), an architect for ISKCON Rural Development, discusses ecologically innovative designs for the housing on IRD projects with Citrakara and Dr. Vasudev Pandya, of the All-India Khadi and Village Commission.

What they do essentially is take a failing farm and make it work. The unique part is that they do it without spending any money. So effective is the work of ISKCON Rural Development (IRD) that farm owners across Maharashtra Province have extended offers of free land in exchange for an IRD project in their area. One such offer included an entire village,

Citrakara dasa, a thirty-two-year-old Swiss devotee whose interest in communal village life brought him to India in 1974, heads the IRD office at Hare Krsna Land in Bombay,

To begin the IRD project, Citrakara and his team leased farmland near Nasrapur (two hours from Bombay), organized renovation and construction work, and then invited neighboring villages to participate, only to find that competition for the jobs exacerbated already strained village relations.

“We gathered laborers together from five villages,” Citrakara explains, “and showed them how there would be no scarcity of work in service to Lord Krsna. Some villagers cleaned the grounds, others whitewashed the temple, cooked, collected firewood, farmed, or helped in the dispensary. For the first time since independence those five villages worked together and sat as a community for a meal, prepared and served by the devotees. Now there is a spiritual bond where just months before there were gang wars and murders.”

Devotees anticipate that the project, named Gokula Dhama after the village in north India where Lord Krsna displayed His childhood pastimes five thousand years ago, will be a prototype for village reconstruction across the country. Under the guidance of an ISKCON advisory board, villagers in and around Nasrapur have already formed cooperatives that benefit more than four thousand residents of the area. IRD is also providing villagers with common-lift irrigation systems, agricultural training, warehousing, and marketing facilities.

“Our first concern is that villages become Krsna conscious and organize for complete self-sufficiency,” Citrakara says. “So establishing the temple is the first order of business. Then we begin cottage industries such as weaving, pottery, gobar gas units, and workshops for household items such as soap and incense.” (Gobar gas is methane generated from cow dung. It is used for heating, cooking, and lighting.) 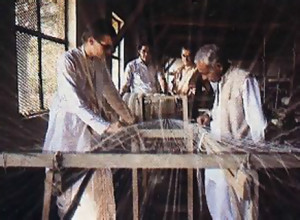 As news of ISKCON’s strategy for rural development spread, the project was able to assemble an advisory committee of fifty-four members, including government officials, retired businessmen, engineers, veterinarians, and MDs, ready to dedicate time and money to the effort.

“With all our good motives, none of us could have done anything of this importance and scale independently,” says Vasudev Pandya, an economist. Dr. Pandya, who works with the All-India Khadi and Village Commission, now heads an IRD committee responsible for the production and sale of cottage industry items.

Dr. Pandya says, “The industrialists and businessmen of Bombay themselves come from small villages—only a small fraction of the city is actually indigenous—and dozens of these people have already come forward offering to donate land for similar ISKCON development projects. They see that devotees are not mercenary, that they are honestly motivated to spiritualize the society and have no political axes to grind.”

From among the various offers of land, the IRD committee has selected twenty projects for Maharashtra Province based on the Gokula Dhama prototype.