The Role of the Disciple — Harvard Divinity School 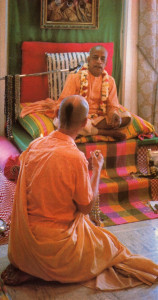 Recently Professor Harvey Cox of Harvard University invited Subhananda dasa, a Hare Krsna devotee, to give three talks on the traditional role of the guru. Later the talking went on, between Professor Cox and his divinity students and their guest. The previous issue of Back to Godhead carried part of this discussion. Here we present the conclusion.

Student: You’ve been speaking at some length about the notion of the guru. According to your tradition, what is the role of the disciple? How does he deal with the guru?

Subhananda dasa: In the Fourth Chapter of Bhagavad-gita, Krsna says, “Just try to learn the truth by approaching a spiritual master. Inquire from him submissively and render service unto him.” So these are fundamental duties of the disciple: service and inquiry. To submit oneself as the guru’s servant teaches one humility and obedience. Due to false pride, we may instinctively dislike the idea of obedience, but it is an important element of spiritual life. In Catholicism, for instance, obedience (along with poverty and chastity) is recommended as an ideal characteristic of a monk. Obedience to spiritual authority—God, scripture, spiritual guides, and so on—decreases false pride and egoism, which are obstacles on the spiritual path, and brings one into harmony with divine providence. And the other point here is inquiry. The disciple must be a genuine spiritual seeker—he must have a burning desire to know the Truth and the path by which he can realize the Truth and escape illusion and suffering. The guru naturally responds most strongly to the disciple who renders sincere and loving service and who has a sincere desire for knowledge and liberation.

The other Gita verse that comes to mind is in the Eighteenth Chapter. Krsna tells Arjuna, his disciple, that gaining spiritual knowledge is difficult for those who lack austerity and devotion. If the disciple is not austere—that is, if he is a sensualist—he will have a hard time comprehending transcendental knowledge in all its subtleties. In other words, mere intellectual ability is not enough. There must be purity of heart, purity of purpose. And that purity develops through certain moral and ethical practices, including sexual restraint, nonviolence to all living beings (which naturally includes ethical vegetarianism), and the avoidance of intoxication. A simple and pure life brings about nobility of purpose and receptivity to higher, spiritual pursuits. And in addition to service, inquiry, and austerity, the disciple must have devotion to his spiritual master. This devotion may take many forms, and it is understood that it takes time to develop. When this devotion is mature, the disciple accepts his guru’s instructions as his very life and soul.

Student: Would you like to tell us about your own experience in relation to your own guru?

Subhananda dasa: If you’d like me to. My spiritual master is His Divine Grace A.C. Bhaktivedanta Swami Prabhupada, who, as you probably know, is the founder of the Krsna consciousness movement. I met him, you might say, through his disciples. In the course of various philosophical explorations, I happened to visit one of ISKCON’s. I’d been looking for a spiritual or meditational discipline and for a communal way of living, and the asrama seemed to have the best of both. By living with the devotees, all of whom were actual or aspiring disciples of Srila Prabhupada, I naturally heard a lot about him. Some of the devotees who had seen him in person exhibited a devotion to him that impressed and moved me. But even more than the enthusiastic devotion of his disciples, it was his books—reading his books—that convinced me he was a formidable spiritual authority. It wasn’t until I had been a member of the movement for one year that I met him. In the course of that year I had developed a very real and deep faith in him as my spiritual master. Over the next few years my relationship with Srila Prabhupada developed and deepened, both through numerous contacts and occasional personal discussions, but also, more importantly, through studying his books and serving him in separation while residing in Krsna consciousness asramas throughout the United States.

Student: My idea of the guru-disciple relationship is that the disciple lives with the guru in his constant association, the disciple literally sitting at his guru’s feet. Is that only a stereotypical view?

Subhananda dasa: The disciple need not always be in the physical presence of his guru. In fact, this kind of bodily association is not even necessary. The disciple’s relationship with the guru doesn’t depend upon physical proximity. This may be difficult to comprehend from the material point of view. but the guru-disciple relationship is not material. It works not under material laws but spiritual ones. Even materially, you can understand that when you’re separated from one who is very dear to you, your mental recollection of that person can provide some degree of solace. In a sense, you feel your beloved within your heart. So this fact hints that the guru-disciple relationship is noncorporeal—and in fact it goes much further than any common familial or romantic relationship.

Vedic texts speak of two ways to associate with the guru. Vapuh means to associate with him through physical presence, and vani, which literally means “words” or “instructions,” points out that the disciple associates with his guru by hearing, assimilating, and acting upon his instructions. That association is not metaphorical. It is real. To the degree that the disciple humbly and sincerely submits himself to the instructions of his guru—to that extent he feels the sublime, transcendental presence of his guru. This may be materially inexplicable, but it is a spiritual fact.

Student: Can you say something more about the nature of that relationship?

Subhananda dasa: The point is that it is a relationship. a two-way relationship. A relationship between two people, a sublime reciprocation of love—through inquiry and service, and guidance and blessings. The disciple is not serving a mere concept, but an actual person. But no ordinary person and no ordinary service. The disciple knows that his guru has the ability to carry him to lofty spiritual heights, and the disciple actually experiences the profound compassion and power of his teacher. He cannot help feeling grateful and devoted, even worshipful.

Yet this guru-bhakti, love for one’s guru, is not generated merely by a sense of gratitude, thankfulness for his benedictions. The disciple loves his guru because the guru is lovable! A genuine suddha-bhakta, a pure devotee of Krsna, is decorated with all saintly attributes. Without getting into an elaborate list of saintly characteristics, suffice it to say that when a person has attained full Krsna consciousness, God consciousness, when his consciousness is situated in such a pure, refined, and exalted state, then his personality, his actions, his words—all things about him—become filled with transcendental sublimity.

One cannot help but become moved by such a rare, spiritually surcharged soul, at least if one is not callous or cynical. Simply being in the presence of such a person inspires humility and prayerfulness. Naturally one feels a desire to associate with and serve such an exalted soul. At first one may render service to such a guru because one understands that there is spiritual benefit in doing so. One may serve out of a feeling of obligation, or simply out of habit. But as the relationship develops, one serves more and more out of spontaneous devotion. The relationship becomes increasingly personal and loving. Love for a pure soul exalts the mind and the spirit. There is no mundane love that can compare with it. This love for the guru is of the same transcendental quality as love for God, krsna-bhakti, because it is the guru’s godly qualities that inspire it. Guru-bhakti is, in that sense, an expression of love for God. And as one’s relationship with the guru develops and expands, so does one’s relationship with Krsna. It is a sublime transcendental arrangement.

Student: A few moments ago you were saying that the disciple can feel that his guru is with him even when not in the the guru’s immediate presence. Are you speaking of a general sense of contact with the guru, or of something more like an intense mystical experience?

Subhananda dasa: Both. Of course, the stress is on the first, less dramatic idea. It’s not necessary for a disciple to have intense mystical experiences of his guru, although some certainly do have such experiences. What is important is that one establishes a legitimate and sincere relationship with his guru, that he hears from the guru and serves him steadily. An authentic guru-disciple relationship does not need to be validated, so to speak, by intense mystical experiences.

I should point out that in our tradition we tend to emphasize gradual, steady spiritual authority over sudden mystical experiences and spontaneous revelations. Not that Krsna consciousness doesn’t lead to sublime states of revelation and ecstasy. It does. But if mystical experience per se is overemphasized, some people might take these experiences cheaply and even contrive them. They may interpret any unusual mental sensation as mystical.

Student: One hears stories of gurus “zapping” their disciples with sudden spiritual experiences, and that sort of thing. Is there any validity to that?

Subhananda dasa: A spiritual master can, certainly, elicit deep feelings and experiences in his disciples, but that is not the real test of the guru’s authenticity. There are individuals who, through yogic disciplines, have developed certain kinds of mental or psychic powers and can exert strong psychic influence on others. Various affective or cognitive experiences can be intense, and one may easily misjudge them to be spiritual. But one cannot judge by feelings—even intense or unusual feelings—alone. The real test of a guru is whether, by following him, you are actually becoming free from material illusion and material desires and are making spiritual advancement. The guru is not a drug but a great soul who can lead a sincere seeker to God.

Student: When your guru, Srila Prabhupada, passed away, did you accept another guru?

Subhananda dasa: No. The relationship with one’s guru does not end with the physical demise of either the guru or the disciple. It continues eternally as a tangible spiritual fact.

Student: What about people who have joined the Krsna consciousness movement since your guru passed away?

Subhananda dasa: Several of Srila Prabhupada’s senior disciples have now accepted the role of spiritual master, and they are initiating disciples.

Student: Are new members told which among these new gurus they must accept as their own, or is that voluntary?

Subhananda dasa: It’s purely voluntary. The new devotee accepts as his spiritual master the person who most inspires his faith and whom he feels he can trust with his spiritual life.

Student: Although he is physically absent, do you still feel your guru’s presence with you?

Subhananda dasa: Yes, definitely. I am far from a perfect disciple, but somehow I continue to feel his guidance and blessings, and the feeling is the principal sustaining force of my life.

Professor Cox: Subhananda, I’d like to thank you very much for giving so freely of your time and speaking with us in such an informative as well as personal way.

Subhananda dasa: Thank you for inviting me. Hare Krsna.