Back to Godhead > ISKCON > News > Hare Krsna Among the Eskimos

Hare Krsna Among the Eskimos

Hare Krsna Among the Eskimos 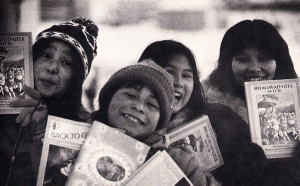 Eskimo children in Yellowknife were enthusiastic to receive literature on Krsna consciousness from Canadian devotees .

Yellowknife, Canada—Two women recently traveled 850 miles from Edmonton to this lonely outpost in Canada’s Northwest Territories to spread the message of Krsna consciousness. Radhika-devi dasi and Krsnangi-devi dasi braved daily temperatures of -30 to -40 °F to bring Krsna conscious books and Back to Godhead magazines to Yellowknife’s 10,000 residents, a good many of whom are native Eskimos and Indians. When Radhika and Krsnangi headed home after the month-long expedition, they had distributed 5,000 Back to Godheads, several hundred hardbound volumes, and, to the Yellowknife Public Library, a full set of books by His Divine Grace A.C. Bhaktivedanta Swami Prabhupada.

Bombay—Bombay magazine has this to say about the Hare Krsna restaurant in Juhu Beach.

“Tucked away in the Juhu retreat of the International Society for Krishna Consciousness (ISKCON) is a restaurant which serves Indian food that would meet the approval of even those who have never found anything quite like mother’s cooking. Called Govinda’s, the restaurant is run with a mixture of religious fervour and occidental thoroughness. Pure vegetarian Indian thalis [dishes] are served by polite, English-speaking waiters, and the bhajans chanting the praises of Ram and Krishna are interspersed with an English commentary, adding a quaint charm to the dichotomous ambiance.

“The softly lit restaurant exudes a sense of peace, and for those who like a little bit of quiet with their food, Govinda’s is definitely the place to go.

“So particular is the management about its vegetarianism that not even onions or garlic are used in the preparations. Nor is anything that could possibly be considered harmful to human health.

“The prices are extremely reasonable, and the atmosphere is relaxed and cozy without giving you the feeling that you are being lulled into a stupor before being fleeced.

“So you can eat all you like at Govinda’s without having to think that you’ll have to empty out your wallet. You can take your fussy old aunt to eat there or even your delicately disposed child. Or you can go on your own, and watch the rain bouncing off the paved ground and the wind swaying the trees in the ISKCON compound. Only remember, as you pick up the roasted variyali [after-dinner spice] that appears with the bill, that you have to say your thanksgiving before you leave—Hare Krishna, Hare Rama.”

New Delhi—For the first time, India’s capital has witnessed Ratha-yatra (The Festival of the Chariots) on a grand scale. Members of the Hare Krsna movement organized the celebration, in which throngs of Delhians helped pull through the streets a 50-foot-high chariot bearing carved wooden forms of Lord Jagannatha, Lord Balarama, and Srimati Subhadra (Lord Krsna, His brother, and His sister). It was a royal procession, complete with gaily decorated elephants and horses and several bands to accompany the chanting and dancing celebrants.