Christchurch Hare Krsna leader Alalanatha dasa
tells how he traded in his surfboard for self-realization. 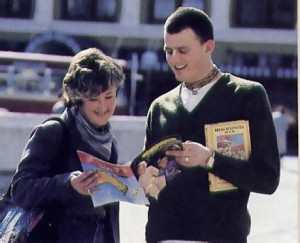 When I first came to New Zealand in 1972, the farthest thing from my mind was opening a Hare Krsna temple. I was on a world surfing safari that ranged from the beaches of South America to South Africa, from Europe to Australia, and the closest idea I had to spiritual life was finding “the perfect wave.” After eight months of looking for it on the Mahia Peninsula and at Raglan Beach, I returned home to Margaret River on the west coast of Australia to build surfboards and compete professionally.

I won my share of prizes and had my share of admirers, but after some time I realized that I couldn’t compete forever. As my powers began to ebb, I had to face the fact that younger surfers would replace me. But surfing was the only life I knew, and my anxiety increased day by day as I watched the force of time taking it all away from me.

I’d been using yoga and meditational techniques to help my balance and concentration while surfing. Now I turned to them to try to find some balance in my life. About this time, I met a Hare Krsna devotee who gave me Srila Prabhupada’s Bhagavad-gita As It Is. As I read about bhakti-yoga, it became clear that the real purpose of yoga was much different than I had thought. The life of professional competition had meant a constant effort at building up a false ego—an image of myself as the supreme enjoyer. Now I saw my real identity as just a servant of the actual Supreme Enjoyer—God. By the time I finished the Bhagavad-gita in early 1976, I was a full-time devotee of Krsna in the Melbourne temple.

Three years later I moved to Auckland, and two years after that I was asked to head up the newly acquired temple in Christchurch, where I live today with my wife and our infant daughter. The location of the temple is ideal—just two blocks from the center of town, in Latimer Square. It has quickly become the focal point in the spiritual lives of many South Islanders and a base from which the devotees travel to all parts of the island holding Krsna conscious festivals. At one recent festival in Nelson, the sunshine and agricultural capital of the South Island, people responded so favorably that the devotees have begun making plans to start a farm community there modeled after New Varshan on the North Island. We’re looking for interested people to ‘ take part in this project.

We’re often invited to lecture at high school and college classes. And at Canterbury University in Christchurch the Hare Krsna Vegetarian Cooking Club teaches the classic art of Vedic cuisine and scientifically looks at the nutritional, economic, ethical, and spiritual advantages of a diet of krsna-prasadam. Because of the club, many students have become sensitive to the cruelty and waste of a meat-centered diet. One result: meatless meals are now available in the cafeteria.

But things don’t always run so smoothly. At Christ’s College, the oldest private secondary school for boys in New Zealand, a group of young men had taken an interest in Krsna consciousness and were regularly visiting the temple after classes. This created some controversy, and finally their dorm master forbade them from coming. Then one day in Cathedral Square, the dorm master himself received a free copy of the biography of the founder of the Hare Krsna movement, Srila Prabhupada. After staying up all night to finish the book, he woke the boys early next morning to ask them questions about Krsna consciousness and rescind the prohibition. Later, at their graduation ceremonies, he also assured the boys’ parents about the sincerity of our Society.