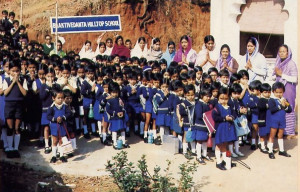 Guwahati, Assam, India—Here in the northeasternmost province of India, the devotees of the Hare Krsna movement have opened a gurukula school that has won a warm response from local parents. More than 425 children have enrolled in Bhaktivedanta Hilltop School and are studying the usual academic subjects side by side with Krsna conscious philosophy and practice. Residents pitched in to help build the school, along with a temple and guesthouse.

Srimati Ulupee Devi Dasi, the school principal, comments, “The real need of the hour in India is for the people to walk up to their eternal position of serving Krsna. This will prevent them from falling prey to the godlessness that pervades the western countries. If we teach children from the youngest age about their eternal relationship with Lord Krsna, their living will always remain centered on God.” 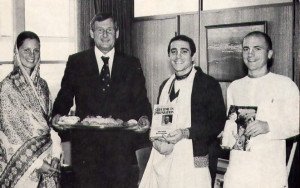 Last April Mr. Colin Kay, the mayor of Auckland, New Zealand, hosted several of New Zealand’s leading Krsna devotees in council chambers. His Holiness Prabhupada-krpa Goswami oversees the activities of the Hare Krsna movement in Australia. Jaya Sila dasa, is the president of Auckland’s Krsna center. The mayor holds a tray of prasadam (sanctified food), which he later found “fantastic.” He was also pleased to receive the literature the devotees gave him: the first volume of Srila Prabhupada’s biography, and a brochure called “The Wonderful World of Hare Krishna in Australia and New Zealand”.