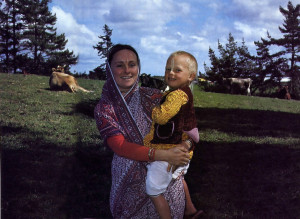 I used to run a citrus orchard down on the Coromandel Peninsula,” says Narayana dasa, the manager of New Varshan, the ninety-acre Hare Krsna farm in Riverhead, about twenty miles north of Auckland. “It was nice living out in the country, but I always felt the lack of any real purpose in my life. But since I have been farming here in New Varshan, things have changed. I still get satisfaction from seeing the crops grow and from living a healthy country life with my family. But more important, I see myself and my family growing in spiritual consciousness.”

With New Zealand’s moderate climate, Narayana and his crew of devotee-farmers can grow crops all year round. The bounty includes potatoes, pumpkins, beans, carrots, squash, eggplant, cauliflower, cabbages, lettuce, zucchini, corn, asparagus, Brussels sprouts, tomatoes, spinach, and a wide variety of nuts, fruits, and flowers. And since New Zealand is often likened to the Biblical “land of milk and honey,” naturally there are lots of cows and bees. The devotees wondered what to do with all that food. 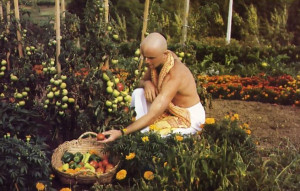 Bhavadasa, who grew up on a farm, harvests produce in the organic garden he planned and planted.

The answer soon came with the arrival of Jaya Sila dasa from Melbourne. It was October 1980, and his new assignment was to head up the Auckland Krsna center. In Melbourne he had been managing a most successful Krsna conscious vegetarian restaurant, and he at once saw the potential for a similar restaurant in Auckland. It wasn’t going to be just a money-making venture, either. Here was a chance to use the excess produce of New Varshan to benefit the people of Auckland spiritually. Turned into succulent vegetarian dishes and then offered to Krsna, the fruits, vegetables, and milk products of New Varshan would become spiritualized by Krsna’s inconceivable potency. And anyone partaking of such prasadam (literally “the Lord’s mercy”) would get great spiritual benefit. 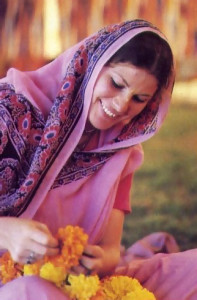 Nature’s bounty is put to good use: a devotee strings a garland that will later adorn the Deity of Krsna

Jaya Sila: “Krsna provided a perfect situation for the restaurant. At 291 Queen Street, it’s right in the center of Auckland’s main entertainment area. We’ve gone to great pains to decorate the restaurant nicely, and people like the view of Queen Street. Also, the food is delicious;it’s prepared with the finest vegetarian ingredients, using all the arts of Vedic cooking. Of course, what we’re offering is much more than just good food and a pleasant atmosphere. Because everything we serve here is krsna-prasadam, when people come to Gopal’s they get a unique transcendental experience.” 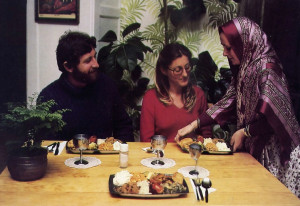 New Varshan’s fresh produce, in the form of delectable vegetarian dishes, finds its way to the table at Gopal’s restaurant in Auckland. When people ask, ”Why does everything taste so delicious?” devotees explain that it all starts with pure consciousness

The restaurant has become so popular that on Friday nights the devotees can hardly keep up with the orders. The menu includes four or five different kinds of salad, two or three vegetable preparations, fried rice with cashews, spicy fried vegetable patties, several varieties of buttery cakes and cookies, and traditional Indian sweets like halava, gulabjamuns, and sandesa. 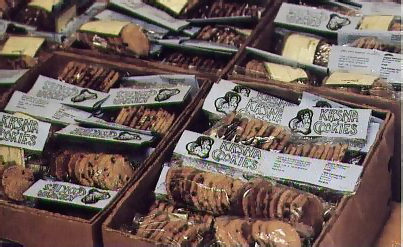 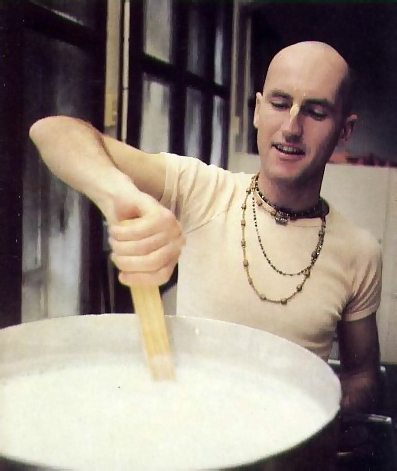 simply stirring up a pot of sweetened milk 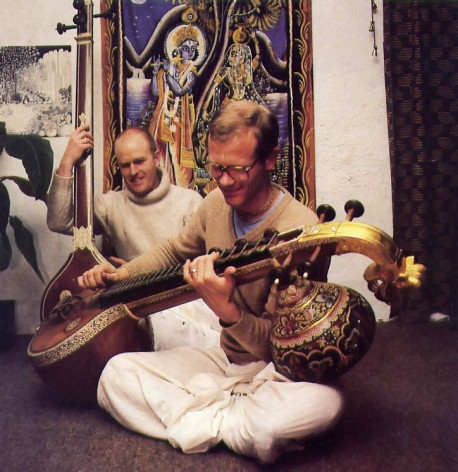 Devotees know they’re cooking for Krsna’s pleasure. When pure vegetarian food is prepared and offered to God in this consciousness, naturally it turns out delicious. An added attraction at Gopal’s on Friday and Sunday nights is traditional Indian music 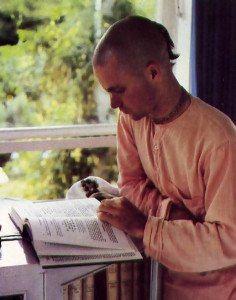 Several of Gopal’s regular patrons have become more deeply involved in Krsna consciousness, and a few have become full-time devotees. Two of these are Bhava dasa and his wife, Kamalaya-devi dasi. Formerly high-school teachers in New Zealand, they now live at New Varshan, where they’re busy establishing a traditional Vedic gurukula school. Like the other Hare Krsna gurukulas throughout the world. New Zealand’s gurukula will teach the standard academic subjects along with the philosophy and practice of Krsna consciousness.

Bhava dasa explains why he thinks the gurukula will provide a significant educational alternative in New Zealand: 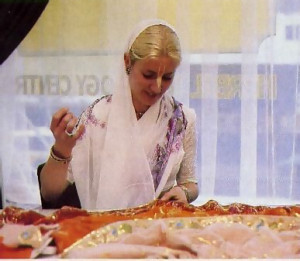 “You’ve got to have a deep understanding of what the actual goal of education is—to develop a loving relationship with God and break free from the painful cycle of birth and death. Western education completely ignores this essential aspect of knowledge. You may know so much about how to operate computers or manipulate the financial markets, but if you don’t know who you are, who God is, and what your relationship is with Him, whatever other knowledge you have will only get you deeper into material entanglement. Gurukula students learn the science of God as well as the three R’s, so they get a truly balanced education. And because the teachers have a high moral character, they can teach the children the qualities of self-control, peacefulness, cleanliness, compassion, and austerity—and all in an atmosphere of love. I think that when the parents in New Zealand learn of our gurukula here, they’ll be very interested in visiting and maybe even enrolling their children. I’ve seen both kinds of education, and I know where I want my children to go.” 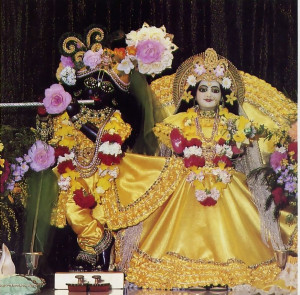 Radha-Giridhari (Radha means “She who worships Krsna best,” and Giridhari is a name for Krsna that means “He who lifted Govardhana Hill.”

Kamalaya dasi adds, “Many people who visit us here at New Varshan are surprised at how happy and secure the children are. We often get comments like, ‘Your children’s faces glow with a joy that we never see on other children. What’s the secret?’

“Of course, the main reason our children are so happy is that they’re Krsna conscious. Krsna is the reservoir of all happiness, and when you come in touch with Him by practicing Krsna consciousness, naturally you become joyful. Another reason is that Krsna conscious marriages are based on devotion to krsna, not on mutual exploitation. Like all members of the Hare Krsna movement married devotees follow four regulative principles: They don’t eat meat, fish eggs. They don’t take any kind of intoxicant. They don’t gamble. And they don’t have illicit sex. For single men and women this means complete abstinence, and for married devotees it means sex no more than once a month, for the purpose of having a child. The point is, from the very beginning of their lives our children are wanted. So there’s no question of abortion, child abuse, abandoned children, or abandoned wives. Husbands, wives, and children alike are all seen as devotees of Krsna, not as objects to enjoy.” 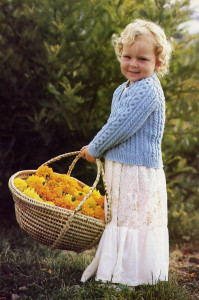 The New Varshan farm is an ideal environment for children to grow up in. Whether helping their elders gather flowers to decorate the Deity, children feel happy and secure because of the God conscious atmosphere on the farm. And when they’re five, it’s off to the gurukula school (one is now in planning at New Varshan) to learn academics and the philosophy and practice of Krsna consciousness.

In the Vedic social system, the training for such a controlled and God-centered household life is called the brahmacari asrama (celibate student life). This gives both men and women the freedom from distraction and the peace of mind to concentrate on their spiritual development. New Varshan gives full scope to such serious students of Krsna consciousness by providing a calm atmosphere and a rich program of spiritual guidance and activities. Devakinandana dasa describes his experiences as a brahmacari at New Varshan.

“Before I came to Krsna consciousness I could never have imagined giving up sex. I thought that by repressing my desires I would become neurotic. But the devotees showed me a book called the Bhagavad-gita, where Lord Krsna explains that you can conquer the desire for sense gratification by getting a higher taste. By rising early and bathing, chanting Hare Krsna meditatively during the quiet predawn hours, worshiping the Deity of the Lord, studying the Vedic scriptures, and performing all my other duties in Krsna consciousness, I got that higher taste here at New Varshan. Now, although I’m not having any sex, instead of becoming neurotic I’m becoming ecstatic!” 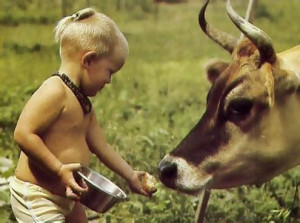 playfully feeding a cow some leftovers

Narayana, Jaya Sila, Bhava and his wife, Alalanatha, and Devakinandana are just a few of the many devotees of Krsna in New Zealand. You could hardly find people whose background, character, and work are more different. Yet what ties them together is much more important. They’re all serious about self-realization, and they’ve all taken vows to follow the rules Kamalaya talked about and to chant Hare Krsna regularly every day. They’ve all promised to follow the instructions of their guru, who comes in a long line of God-realized souls and who has promised, in his turn, to guide them to perfection. They all worship the Deity of Krsna, eat only krsna-prasadam, study scriptures like Bhagavad-gita every day, and, in short, do all the things that make them part of Krsna’s family.

And this is the family we invite you to join.