Back to Godhead > ~Featured~ > “The Ghost in the Machine” — Science

“The Ghost in the Machine” — Science

A Dialogue on “The Ghost in the Machine”

Is the existence of the soul merely a myth propagated by fuzzy-minded fanatics—or a fact verifiable by a nonmechanistic science? 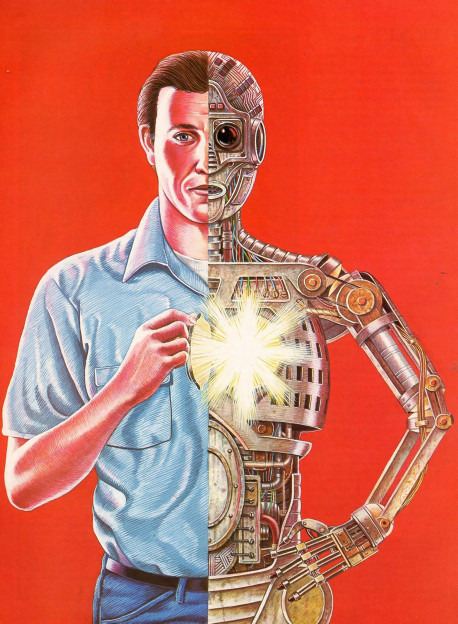 The prevailing view among modern scientists is that a human being is in essence a complex machine. According to this view, our life and consciousness have their source in the interactions of our bodily parts—neurons in the brain, organelles in the cells, and so on. Mechanistic scientists scoff at the idea that a transcendental entity—the self, or soul—could be the source of life and consciousness. “The ghost in the machine” is a favorite epithet they use to turn thumbs down on the idea of the soul and attempt to dismiss it from serious consideration.

What follows is an excerpt from Mechanistic and Nonmechanistic Science, a forthcoming book that explores in depth the question of the origin and nature of life and consciousness. Dr. Avaroha expresses the views of the author; Drs. Kutark and Shunya are composite characters who express views widely held by members of the modern scientific community.

Dr. Avaroha: The Bhagavad-gita states that each individual organism consists of an irreducible conscious entity riding in a physical body composed of gross material elements. The body is insentient—a complicated machine, according to Bhagavad-gita [18.61]. In contrast, the conscious entity, or jivatma, is the actual sentient self of the living being, and it cannot be explained in mechanistic terms [Bg. Ch. 2]. Each jivatma possesses all the attributes of a person, including consciousness, intelligence, and innate sensory faculties. These attributes cannot be reduced to the interplay of some underlying impersonal entities that we might hope to describe by a mechanistic theory. In a sense, we can compare the jivatmas to the hypothetical fundamental particles sought by physicists. Just as these particles are envisioned as having certain irreducible material properties, the jivatmas can be thought of as fundamental units of conscious personality endowed with certain irreducible personal traits.

Dr. Kutark: So you are proposing a theory that features a transcendental soul as a primitive element. A priori, I suppose there’s no reason why we can’t propose such a thing. But are there any experiments proving the existence of the soul?

Dr. Avaroha: To answer this question, let’s consider how physical experiments are conducted. In physics we can show that an entity exists only by performing an experiment that takes advantage of that entity’s mode of interaction with other matter. Take for example the cloud-chamber tracks made by charged particles such as electrons. These tracks result from the ionization of atoms near the path of the particle, and this ionization is caused by the electromagnetic interaction between the particle and the electrons in the atoms. Neutral particles do not interact in this way and thus leave no tracks. The neutrino, for example, is famous for interacting with matter in a very weak way—by what is known as the weak force, in fact—and thus it is very hard to detect experimentally.

Dr. Kutark: So to detect the soul in an experiment we would have to take advantage of the soul’s particular mode of interaction with matter. That’s reasonable. But what is that mode of interaction? At present, physicists know of four basic types of forces: strong, weak, electromagnetic, and gravitational. You are suggesting, I gather, that the soul does not interact in any of these modes?

Dr. Avaroha: That’s correct, and so we can’t hope to detect the presence of the jivatma directly with any of our usual physical instruments. The jivatma does interact with matter, but in a very indirect and subtle way. As a result of the jivatma’s primary interaction, secondary electromagnetic interactions are induced in the body, and these affect the nervous system in particular [Srimad-Bhagavatam 3.26.34]. These electromagnetic effects are detectable in principle, but they are very complex. Therefore, it would be very difficult to unambiguously single out the influence of the jivatma on the body by analyzing physical measurements.

Dr. Shunya: This makes it seem very implausible that you could ever verify the existence of this hypothetical jivatma. But I would like to make another, more fundamental point. Suppose you could demonstrate from experimental data that some new fundamental law of nature was needed to explain the functioning of the brain. A theory incorporating this law would still be mechanistic. All our scientific statements—and, in fact, all valid statements of any kind—refer to patterns in measured data, and they are therefore necessarily mechanistic, even though we may not always try to express them in formal mathematical language. Since you are describing consciousness and personality as nonmechanistic, you are in effect saying nothing at all. It is meaningless even to talk about verifying such statements experimentally.

Dr. Avaroha: You are partly right. It is indeed true that we cannot study consciousness per se by examining its influence on the motion of matter. Of course, we can make indirect inferences about consciousness by such methods. But to make a real study of consciousness, we have to take advantage of the higher cognitive potencies of the jivatma itself. To understand consciousness and deal with it in a practical way, we need to enter a domain of discourse and experience that goes beyond the mechanistic world view. If we were simply machines, then this would not be possible. But, according to Bhagavad-gita our own existence transcends the mechanistic realm.

When the jivatma is embodied, its innate senses are linked up with the information-processing system of the physical body, and thus the normal sensory perceptions of the jivatma refer almost exclusively to the physical states of machines, including the machine of the brain [Bg. 15.7]. Only the embodied jivatma’s direct perception of its own internal sensory and cognitive activities involves something that cannot be described in terms of mechanical configurations. For this reason, there is a strong tendency for the jivatma to overlook its own nature and view the world in an entirely mechanistic way.

But the inherent senses of the jivatma are not limited to observing the states of the physical body. The jivatma is capable of direct reciprocation with other jivatmas and the Paramatma, or Superconsciousness. Since this mode of interaction directly involves the use of all personal attributes and qualities, it cannot be described in mechanistic terms. But it can be understood and meaningfully discussed by persons who have attained to this level of experience by direct realization.

Dr. Shunya: Such “realization” is purely subjective! Anyone can claim to have all kinds of remarkable realizations and mystical visions, and in fact there are many thousands of such people, and thousands of conflicting sects composed of their gullible followers! But science is limited to knowledge that can be verified objectively. For an observation to be considered objective it must be possible for several different people to make the observation independently and then correlate their results.

Dr. Avaroha: Two persons able to function on a higher level of consciousness would certainly be able to recognize each other as realized souls, and they could also meaningfully discuss their realizations with other similarly endowed persons. We can partially illustrate this situation by the analogy of two seeing persons discussing a sunset in the presence of a congenitally blind person. The blind person would not be able to appreciate their statements, and he might take the skeptical viewpoint that talk about sunsets is simply meaningless. Nonetheless, the seeing persons would go right on discussing the sunset, and each would feel confident that the other was sharing his experience and understanding what he was talking about.

Another point is that realized persons are able to perceive themselves and others directly with their innate transcendental senses. Such persons are not restricted to external observations of behavior. Thus, confirmation of higher states of consciousness is not limited simply to the subjective perception of each individual.

You are certainly correct in pointing out that there are many people who delude themselves and others by claiming to have attained various kinds of mystical realizations. But the existence of such cheating does not imply that a genuine science of higher consciousness is impossible. Such a science must indeed be based on verification of crucial observations by more than one person, but such verification is possible by realized persons.

Bhagavad-gita outlines a practical system for attaining higher realization. In this system the seeker of knowledge must take instruction from a realized soul [Bg. 4.34]. By following these instructions, the person’s higher cognitive faculties awaken by the grace of the Supreme [Bg. 10.10]. His realizations, however, can readily be evaluated by his teacher, who is fully capable of detecting mistakes and illusions. Furthermore, one can check the conduct of both teacher and disciple by consulting other self-realized souls and by referring to a standard body of authoritative literature. This system is like modern science in that the findings of individuals are scrutinised by their peers and evaluated in the context of standard knowledge.

Dr. Kutark: You have referred to the Supreme and to Superconsciousness. What do you mean by these terms? Also, just what does one realize by “awakening his higher cognitive faculties”? Can this realization be conveyed to a person whose experience is limited to the ordinary functioning of the five senses?

Dr. Avaroha: Bhagavad-gita explains that consciousness exists in two aspects, the infinite and the infinitesimal. The infinite consciousness is the very basis of reality and the ultimate source of all phenomena. According to Bhagavad-gita, this absolute consciousness is the Supreme Person, who is fully endowed with all personal attributes—such as senses, will, and intelligence—and who is known in the Vedic literature by many names, such as Krsna and Govinda. This is, of course, the same Supreme Being known as God in the Judeo-Christian tradition, or as Allah in Islam.

The infinitesimal aspect of consciousness consists of the innumerable atomic selves called jivatmas. We can illustrate the relation between atomic and infinite consciousness by a simple analogy. In classical physics we can fully characterize an electron as a minute charged particle that interacts in a certain way with an electromagnetic field. Similarly, we can understand the true character of the jivatma in terms of its natural interaction with the Supreme Person. Just as we can think of the electron as being defined bv its interaction with an electromagnetic field, we can understand the jivatma as being defined by its personal interaction with the Supreme Conscious Being.

Thus, the final goal of self-realization is to attain this state of natural reciprocation with the Supreme. This mode of interaction is entirely personal, being based on the exchange of loving service. We get some hint of the quality of this exchange from the following characterization of the Supreme Person in the Brahma-samhita [5.38]:

“I worship Govinda, the primeval Lord, who is Syamasundara, Krsna Himself. with inconceivable, innumerable attributes. The pure devotees see Him in their heart of hearts with the eye of devotion tinged with the salve of love.” Of course, we can attain full understanding of what this description means only by direct experience, just as we can understand the taste of a fruit only by actually eating it.

SADAPUTA DASA studied at the State University of New York and Syracuse University and later received a National Science Fellowship. He went on to complete his Ph.D. in mathematics at Cornell, specializing in probability theory and statistical mechanics.