Back to Godhead > Krishna > Lord Ramacandra > The Saga of Lord Rama

The Saga of Lord Rama

A classic Indian epic of
the eternal war between Good
and Evil comes to the television screen. 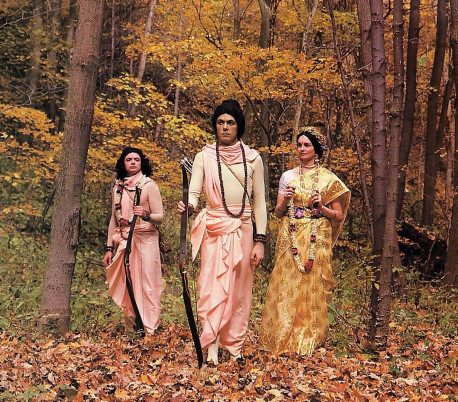 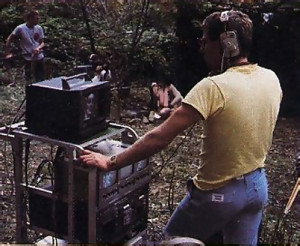 The Vedic literature describes how Lord Krsna, the Supreme Personality of Godhead, appears in the material world throughout history to eradicate evil, establish the principles of religion, and enliven His devotees. Sometimes He comes Himself, but more often He expands as an incarnation who manifests a certain portion of His supreme glories. Among these incarnations, one of the best known and most sacred is Lord Ramachandra, the hero of the Ramayana, a Sanskrit epic written by the great sage Valmiki.

Recently ISKCON Television, the team of devotees that produces television programs on Krsna conscious topics, shot a video version of Lord Rama’s pastimes. Under the direction of Nrsimhananda dasa, who has worked extensively with professional TV studios in Hollywood, ITV staged an all-devotee Ramayana at the Hare Krsna movement’s New Vrindaban farm community in West Virginia. Srila Prabhupada ‘s Palace of Gold (see back to godhead Vol. 16, No. 7) and the woodsy New Vrindaban landscape provided the perfect setting. Nrsimhananda adapted a script condensed from the original Ramayana by Nanda-kisora dasa, a seasoned Krsna conscious director and actor. What follows is a synopsis of the plot, with highlights of the ITV production 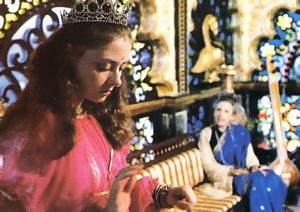 Lord Rama’s coronation as King of Ayodhya is blocked when a maidservant (in background) goads Queen Kaikeyi into betraying Rama.

Millions of years ago a king named Dasaratha ruled the world from his capital city, Ayodhya, which lies about midway between present-day Calcutta and New Delhi. By his queens Dasaratha had many sons, but the jewel among them was Ramacandra, the Personality of Godhead Himself.

Even from His youth Rama possessed all the qualities of a leader. His magnanimity was unrivaled, as were His religious wisdom, prowess in fighting, and freedom from greed for the privileges of power. His strength knew no limit: He won the hand of Sita-devi, the goddess of fortune herself, by breaking a huge bow His rival suitors couldn’t even lift. 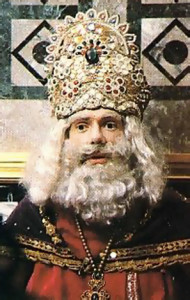 When the time came for King Dasaratha to retire, he naturally chose as his successor his eldest and most qualified son, Rama. All Ayodhya rejoiced at hearing the news and prepared for the coronation of the beloved prince. But the coronation was not to be. Kaikeyi, one of Dasaratha’s queens, was incited by a malicious maidservant to block Rama’s ascendance to the throne. Some time before, Dasaratha had promised Kaikeyi two boons, but she had asked that they be deferred. Now, blinded by envy, Kaikeyi held Dasaratha to his word and forced him to fulfill two wishes: first, she wanted Rama exiled to the forest for fourteen years; and second, she wanted her own son, Bharata, crowned King of Ayodhya. 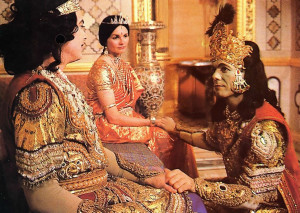 Of course, since Rama and Laksmana are none other than the Personality of Godhead and His first expansion. Their stay in the Dandaka Forest proved no ordeal at all. For some time They and Sita lived peacefully and happily, enjoying nature’s gifts and making friends with many sages who had repaired to the forest for seclusion and meditation. But then came a fateful turn of events … 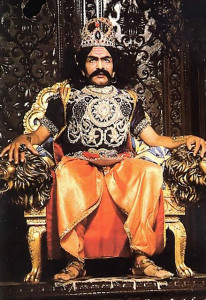 Ravana, king of the man-eaters, sits on his throne in his island kingdom of Lanka (right). Arrogant, deceitful, vile, and insatiable. Ravana commits every imaginable atrocity in his attacks on the pious and the innocent. His favorite sport is raping other men’s wives and dragging them back to his huge harem on Lanka.

One day a hideous man-eating demoness named Surpanakha came upon Rama’s cottage. Overwhelmed with lust at seeing Rama’s handsome figure, she attempted to seduce Him. When that failed she turned to Laksmana, but both He and Rama ridiculed her. Infuriated, Surpanakha rushed toward Sita to devour her. Rama stopped Surpanakha and had Laksmana cut off her nose and ears to teach her a lesson. Then the demoness ran into the forest, screaming in agony and vowing that her brother Ravana would avenge her humiliation.

Ravana was the king of the man-eaters. By practicing severe austerities, he had won from Lord Brahma, the chief demigod, several boons that gave him near-invincibility. From his kingdom on Lanka, the island off the southern tip of India, the fearsome Ravana and his man-eating minions would roam the earth and the heavens, pillaging, raping, and devouring at will. Ravana cared for neither God nor law nor morality. Always intoxicated by pride and arrogance, as well as by strong drink, Ravana was sin incarnate. 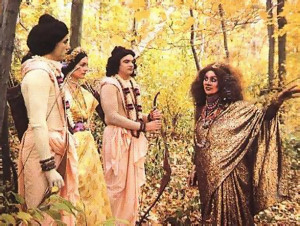 When Ravana’s sister Surpa-nakha comes across Rama and His companions in the forest, she tries to seduce Rama and Laksmana and devour Sita. Laksmana lops off Surpa-nakha’s nose and cars and sends her screaming into the forest, vowing revenge .

Ravana had several brothers who were equal to him in vileness. One of these, named Khara, lived in a part of the Dandaka Forest near Rama’s cottage and led an army of man-eaters who fed on the flesh of saintly hermits. From Rama’s cottage Surpanakha fled to Khara, and when he saw what Laksmana had done to his sister he flew into a rage and sent out 14,000 of his formidable warriors to slay Rama and Laksmana. But Khara didn’t realize with whom he was dealing. Rama’s arrows, like shafts of fire, flew from His golden bow with unerring accuracy, annihilating Khara and his army. A lone survivor escaped to Lanka to tell Ravana of the disaster wrought by the supernatural valor of Rama. 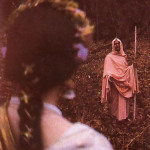 With Rama and Laksmana absent, Sita is easy prey for Ravana, who comes before her disguised as a renunciant.

Hearing of Rama’s exploits, Ravana thought it wise to adopt a devious lactic. Rather than confront Rama directly, Ravana would kidnap Rama’s beloved Sita so that Rama would die of a broken heart. Not only would this plan avenge the humiliation of Surpanakha and the slaughter of Khara and the 14,000 warriors, but it would also provide Ravana with the consummate object for his lust: the chaste and beautiful Sita. 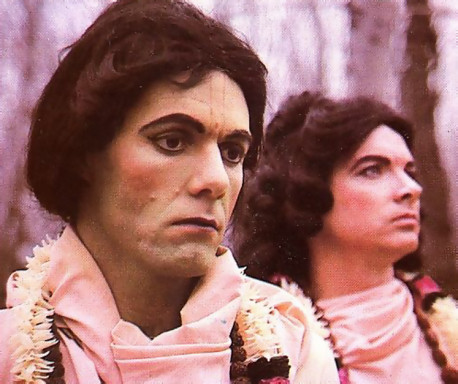 Rama and Laksmana, distraught at not finding Sita in the trio’s forest cottage, search for her and finally come upon the dying Jatayu 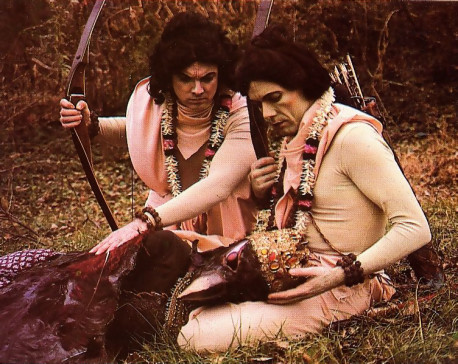 With his last breath the huge bird tells Rama that he tried to stop Ravana from making off with Sita, but that he was no match for the ferocious demon. 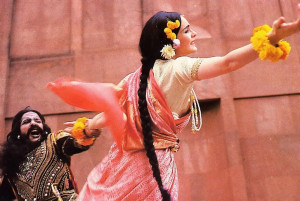 When flattery and sweet words fail, Ravana, obsessed with the beautiful Sita, tries to enjoy her by force. A demigod’s curse prevents him from violating her outright, and she spurns all his advances and warns of Rama’s revenge.

Ravana paid a visit to his warlord, Marica. Like many other demons, Marica could change his form at will. Ravana ordered him to take the form of an irresistibly charming deer and then to frisk before Sita. When the deer would run into the forest, Ravana hoped, Sita would insist that Rama and Laksmana capture it for her. Left alone, Sita would then be easy prey for Ravana.

The ruse worked, and Ravana came before the lone Sita disguised as a robed renunciant. Sita welcomed him into the cottage and offered him refreshment, but suddenly Ravana cast off his disguise and declared his purpose. Despite Sita’s piteous entreaties and, prophetic warnings, Ravana abducted Sita and carried her off toward Lanka. 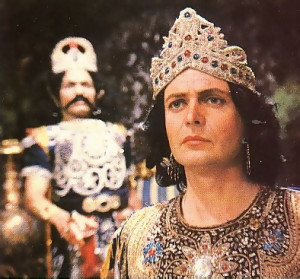 Meanwhile, Vibhisana, a pious brother of Ravana’s, decides at last that the only honorable thing for him to do is defect to Rama

Along the way Ravana met and mortally wounded Jatayu, a huge bird who was a lifelong friend of King Dasaratha’s. Jatayu tried to stop Ravana, but was no match for the world-conquering demon. When Rama and Laksmana discovered that Sita had been kidnapped. They were overcome with grief. In anguish They searched everywhere, finally coming upon the dying Jatayu, who told them with his last breath that it was Ravana who had made off with Sita. Later Rama learned that a certain tribe of monkey warriors, headed by Hanuman and Sugriva, could find Ravana’s kingdom and help Rama regain Sita. Rama and Laksmana sealed an alliance with the monkey warriors and found them to be fiercely devoted followers. Among them all, Hanuman stands as the very emblem of the faithful, dedicated servant. Being the son of the Wind-god, Hanuman could fly, and when he learned that Ravana’s kingdom lay on the island of Lanka, he used his prodigious strength to leap over the sea. All he knew was that he must find Sita and help retrieve her for Rama. 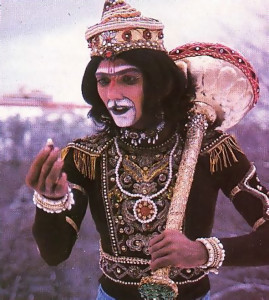 Hanuman, Rama’s devoted monkey servant. prepares to return from Lanka to Rama’s encampment with a pearl Sita has given him proof he has found her

Shrinking himself down to the size of a cat, Hanuman walked freely through the fabulous city of Lanka, reconnoitering its defenses. Finally, he found Sita in the heart of a dense forest of Asoka trees. She was wan and weak, wracked with grief at her separation from her beloved Rama. Because of a demigod’s curse, Ravana had been unable to force himself upon her, and she had resisted all his advances. Though the torment had taken its toll, she was still radiant with beauty.

Hanuman gave Sita one of Rama’s rings to prove he was a messenger, not a man-eater. Then the noble monkey soothed Sita with sweet remembrances of her Lord. Hanuman assured her that Rama would soon rescue her, and she sent him forth with one of her pearls so that Rama would know that Hanuman had indeed found her. Before leaving Lanka, the jubilant Hanuman set fire to large sections of the city and slew thousands of Ravana’s soldiers. 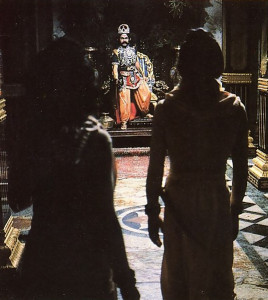 The climatic confrontation. All of Ravana’s formidable henchmen have been annihilated by Rama and His allies, and now He and Laksmana stand face to face with Ravana.

Upon hearing Hanuman’s report, Rama at once prepared to invade Lanka. He led the army of monkey warriors to the sea and told Sugriva to build a bridge of, boulders across to Lanka. The faithful monkeys had no idea how such a feat could be accomplished, but they dutifully began heaving huge rocks into the ocean—and Rama made them float, by His divine energy! Rama’s legions of monkey warriors marched across the miraculous bridge to Lanka, and soon the great siege began. Ravana’s men were trained in the art of war and armed with bows and arrows, swords, lances, tridents, and other such weapons. The untrained monkeys had only boulders and tree trunks for weapons. But they had one insuperable advantage: they were empowered by Lord Rama, the Personality of Godhead Himself. For some days the two armies fought ferociously, with heavy casualties on both sides, and finally Rama’s forces routed the man-eaters. 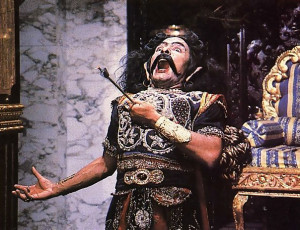 After a furious battle, Ravana is struck in the heart by one of Rama’s invincible arrows.

At last Ravana himself had to confront Rama. Even now the demon wouldn’t believe his power could be cut down. Rama rebuked Ravana for cravenly kidnapping Sita in His absence, and the demon in turn cast low insults at the Lord. The furious battle that then ensued between Rama and Ravana lasted for days without letup. The earth, the seas, and the heavens were disturbed by the sheer force of their combat, and various astronomical events portended the imminent defeat of Ravana. Finally, the Lord released an arrow from His bow that struck Ravana’s heart like a nuclear bomb. The demon tumbled to the ground, vomiting blood. Having at last rid the world of the curse of Ravana, Rama installed Vibhisana, Ravana’s pious brother, as King of Lanka. 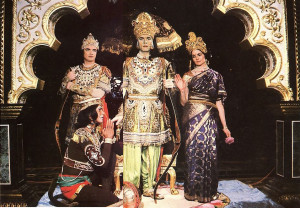 Having killed Ravana and regained Sita, Rama returns to Ayodhya for His triumphal coronation

Rama went at once to the Asoka grove to find Sita. Joyously reunited, they flew back to Ayodhya in a glorious airplane bedecked with flowers. At last Lord Ramacandra had retrieved Sita, the fourteen-year exile was over, and the long-awaited coronation could take place.