Back to Godhead > Devotees > Chanting > Sankirtana 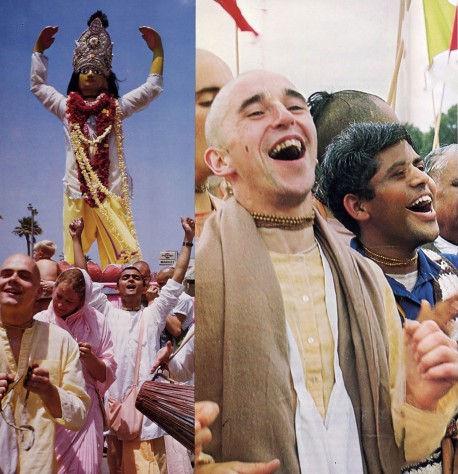 “O King, the Age of Kali is an ocean of faults. It is an age of quarrel, confusion and hypocrisy. But in this age there is one great advantage—simply by chanting the Hare Krishna mantra, one can be freed of all material contamination and thus be elevated to the spiritual world.” (Srimad-Bhagavatam, 12.3.51) 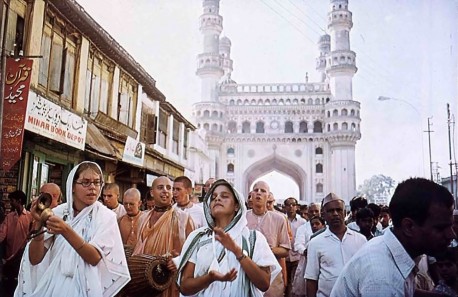 The age of Quarrel and Hypocrisy—Kali-yuga—is the age we live in now. It is an age fraught with problems and anxieties, a confused age in which spiritual progress is especially difficult. Therefore, the Supreme Personality of Godhead, Krishna Himself, descended to this world as Lord Caitanya Mahaprabhu to give humanity a direct and potent way to make progress in self-realization and consciousness of God. That authorized way for spiritual advancement is the chanting of the holy name of the Lord, especially as found in the Hare Krishna maha-mantra, or Great Chant for Deliverance—Hare Krishna, Hare Krishna, Krishna Krishna, Hare Hare/ Hare Rama, Hare Rama, Rama Rama, Hare Hare.

The original Vedas explicitly declare that no spiritual path is superior to that of chanting the maha-mantra: 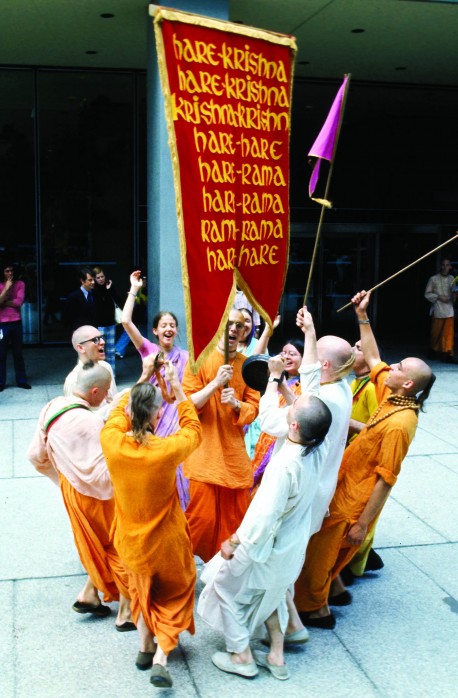 To further emphasize that the chanting of Hare Krishna is the genuine Vedic way to achieve spiritual success in our modern age, Sri Caitanya Mahaprabhu often quoted the following verse from the Brhan-naradiya Purana: 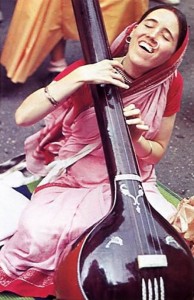 In this Age of Kali, the holy name of the Lord, the Hare Krishna maha-mantra, is the incarnation of Lord Krishna (kali-kale nama-rupa Krishna-avatara). Therefore, simply by chanting the holy name, one associates with the Lord directly. Anyone who does so is certainly delivered. This chanting has been introduced in the West by His Divine Grace A.C. Bhaktivedanta Swami Prabhupada. His Divine Grace says, “Since Krishna and His holy name are identical, the holy name is eternally pure and beyond material contamination. It is the Supreme Personality of Godhead as a transcendental vibration.”

In the Vedic literature, Krishna is compared to the sun, and maya, or illusion, is compared to darkness. Just as the sun, appearing above the horizon, dissipates the darkness of night, so Lord Caitanya’s movement of sankirtana, or congregational chanting of the holy name of Lord Krishna, can dissipate the materialistic consciousness of the Age of Kali. 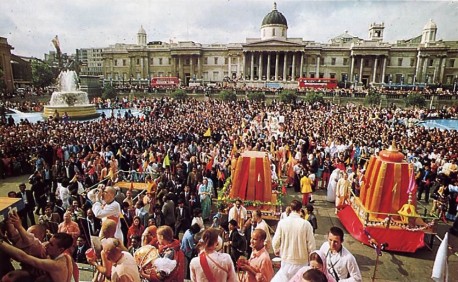 In his purports to Sri Caitanya-caritamrta, Srila Prabhupada explains the essence of the sankirtana movement: “The sankirtana movement has been introduced by Lord Caitanya Mahaprabhu just to dispel the illusion of maya, by which everyone in this material world thinks himself to be a product of matter and therefore to have many duties pertaining to the body. Actually, the living entity is not his material body; he is a spirit soul. He has a spiritual need to be eternally blissful and full of knowledge, but unfortunately he identifies himself with the body, sometimes as a human being, sometimes as an animal, sometimes a tree, sometimes an aquatic, sometimes a demigod, and so on. Thus with each change of body he develops a different type of consciousness with different types of activities and thus becomes increasingly entangled in material existence, transmigrating perpetually from one body to another. Under the spell of maya, he does not consider the past or future but is simply satisfied with the short life span he has gotten for the present. To eradicate this illusion, Sri Caitanya Mahaprabhu has brought the sankirtana movement, and He requests everyone to accept and distribute it.”

Lord Sri Caitanya Mahaprabhu requested His followers to spread the Krishna consciousness movement all over the world, and He predicted that through their efforts His holy name would one day be chanted in every village and town on the surface of the globe. As a sincere servant of Sri Caitanya Mahaprabhu, His Divine Grace A.C. Bhaktivedanta Swami Prabhupada has taken up the mission of spreading the sankirtana movement, and thus he has been able to render a great service to humanity in this Age of Quarrel and Confusion. Although ten years ago few people in the West had even heard of Hare Krishna or Lord Caitanya Mahaprabhu, now these names are becoming household words in the United States, Canada, Latin America, Europe, Australia and, in fact, throughout the world. In the purports of Sri Caitanya-caritamrta, Srila Prabhupada writes, “The Krishna consciousness movement is being distributed all over the world through the chanting of the holy name of the Lord, the Hare Krishna maha-mantra, and people who were leading confused, chaotic lives are now feeling transcendental happiness. They are finding peace in sankirtana, and therefore they are acknowledging the supreme benefit of this movement.” Srila Prabhupada, however, declines to accept any personal credit for the success of the Krishna consciousness movement. “This is the blessing of Lord Caitanya Mahaprabhu,” he continues. “His prediction is now factually being fulfilled, and those who are sober and conscientious are appreciating the value of this great movement.” 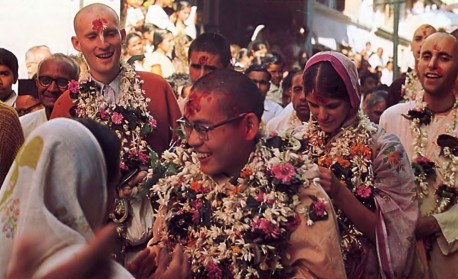