Rishikesh — the Sacred Temple City of the Ganges

Sacred Temple City of the Ganges 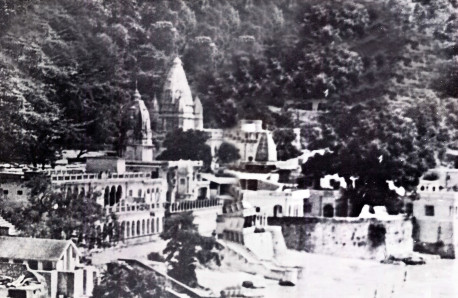 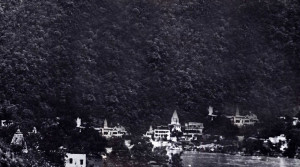 RISHIKESH, NESTLED IN THE FOOTHILLS OF THE HYMALAYAS, FACING OUT ACROSS THE GANGES RIVER.

Formerly Rishikesh was a special retreat of the ”sadhus,” the saintly wise men, reserved for “tapasya,” the performance of austerities. But today this type of meditation has been replaced by the singing of sacred mantras and hymns during joyful gatherings known as Kirtans. Entire families attend and participate, and all throughout the day the town’s atmosphere is enlivened by this singing. 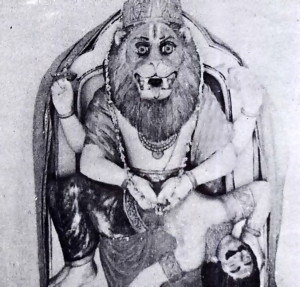 NRISHINGHA DEVA, THE HALF-LION HALF-MAN DEITY AT A TEMPLE IN RISHIKESH.

In the authentic, carefully preserved Vedic writings called “Shastras,” or Scriptures, there is a prophecy regarding the present age of industry and science, and a special mantra is offered for God realization in this era: HARE KRISHNA, HARE KRISHNA, KRISHNA KRISHNA, HARE HARE/HARE RAMA, HARE RAMA, RAMA RAMA, HARE HARE. And so by following a natural tendency to sing and dance, people are able to act in accordance with the Scriptures, and thus make progress in spiritual understanding while they enjoy life. 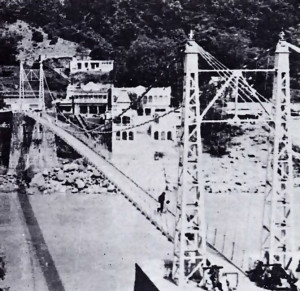 Much of the population of Rishikesh is made up of pilgrims, visiting this as one of a series of holy places in the area of the Himalayas. Everyone takes a dip in the sacred Ganges before retiring to rooms provided free of cost to weary travelers by the different temples. Whether rich or poor, no distinction is made. There are many such places in India, maintained by the wealthy for the spiritual upliftment of the population in general. This principle is quite firmly established throughout the country, and is one of the main causes for the existence of a more spiritually oriented population. The most common Indian has some knowledge of the existence of the spirit from which consciousness emanates, and is trained to act, in some way, to uplift himself to the spiritual platform. The result is a genuinely happy people, for all that one is led to believe in the West; and a population with a deep sense of security as well—which may surprise many westerners, but is quite true. 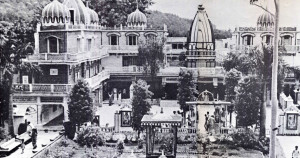 PARAMATMAN NAKIRTAN TEMPLE, FAMOUS FOR ITS LIFE-SIZE WAX STATUES OF THE DEITIES, SAINTS AND YOGIS, SOME OF WHICH CAN BE SEEN HERE IN NICHES ALONG THE WALL.

How the sacred Ganges came into being makes a very nice story: Vamana, the Dwarf Incarnation of God, kicked a hole with His foot in the shell of the universe, and a drop of the Causal Ocean leaked in. This droplet was caught by Lord Shiva, a powerful demigod and great devotee of the Lord. Shiva kept it in his hair for some time and then released it, and it became the River Ganges, which runs down through all the fourteen worlds. 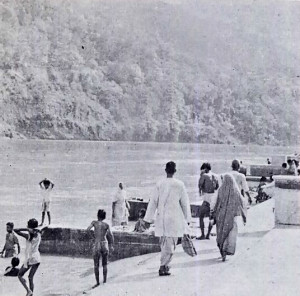 PILGRIMS REFRESH THEMSELVES IN THE COOL, SACRED WATERS OF THE GANGES.

In the early morning and evening hours at Rishikesh the hills ring with bells, announcing the temple worship of Lord Narayan and Lord Sri Krishna, two forms of the Supreme God. People rise with the sun and flock to the temples to see the performance of a ceremony where symbolic items—the five-light ghee lamp, the water-filled conch, and a pretty folded handkerchief—are passed before the deities’ eyes, along with the chanting of Sanskrit mantras and verses of praise. 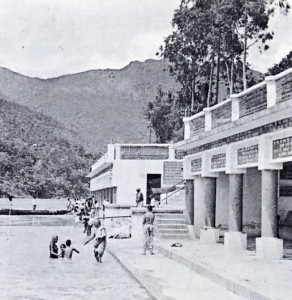 FAMILIES MAKE ABLUTIONS IN THE GANGES AT DAWN.

The deities are called “Archa Vigraha,” a form of incarnation of God. They are made in the image of God, according to the descriptions of Him found in Scripture, and He enters into their forms in order to accept the worship of His devotees. The deities are carefully attended, exactly like living persons: they are fed, bathed, clothed, and offered beds for taking rest. 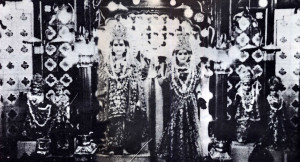 THE FIRST PHOTO EVER PERMITTED OF THE SUBLIME DEITIES AT SWARGASHRAM, A TEMPLE COMPLEX ACROSS FROM RISHIKESH. THE DEITIES ARE, FROM LEFT TO RIGHT: KRISHNA, RADHA, NARAYANA, LAKSHMI, RAMA AND SITA.

The temple ceremony ends with the splashing of the ceremonial waters on the crowd. Just raise your hand and the “Pujari” the priest, will give you a liberal sprinkling. Then there comes distribution of delicious sweets called “prasadam,” food which has first been offered to and accepted by the deities. During this distribution the deities are fanned and given rest. Everyone then returns to his ordinary business, inspired by the sight and worship of the deities. And everyone will surely return again and again to experience that inexplicable feeling of goodness from having stood in the sacred presence. 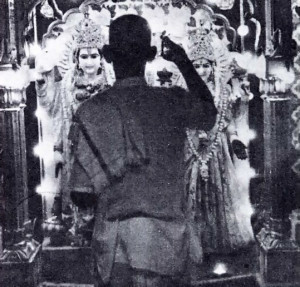 A “PURAJI” OR PRIEST PERFORMS “ARTI”, FORMAL WORSHIP OF THE LAKSHMI-NARA-YANA DEITIES

The deities are sometimes considered to be like clocks: The clock is a representative of time, and by looking at the clock one can see time . Even if he destroys his clock, however, and cannot see it, time itself is not destroyed. 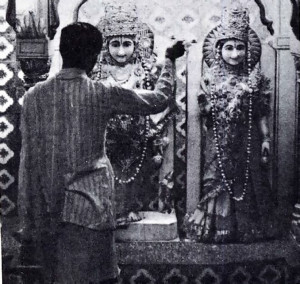 A “PURAJI” OR PRIEST PERFORMS “ARTI”, FORMAL WORSHIP OF THE LAKSHMI-NARA-YANA DEITIES

Rishikesh is a heaven in itself, and the beautiful Deities at Swargashram, a temple situated on a nearby peninsula along the Ganges, make it even more perfect, with God Himself to preside over it. It is a place of matchless scenery, and a place where the soul is at home.