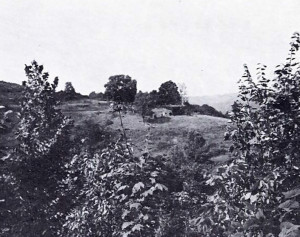 Site of new Vrindaban, West Virgina: a spiritual city to rise in America

In September, 1965, A.C. Bhaktivedanta Swami—a holy man in the renounced order of life—landed in New York and introduced the Hare Krishna movement to the West. The movement is based on the chanting of the holy names of God: HARE KRISHNA, HARE KRISHNA, KRISHNA KRISHNA, HARE HARE/HARE RAMA, HARE RAMA, RAMA RAMA, HARE HARE. It has from time to time known great popularity in India, and now the Swami has set out to spread its influence in America. By July, 1966 Swamiji had already attracted enough young disciples to form the International Society for Krishna Consciousness. located in the East Village at 26 Second Avenue. In the religious corporation papers, it is noted that one of the main purposes of the society in propagating Krishna Consciousness is “to develop the idea within the members and humanity at large, that each soul is part and parcel of the quality of Godhead (Krishna).” The present column, devoted to the activities of the various Krishna Consciousness temples is therefore named Parts & Parcels in keeping with the Society’s mission.

New Hare Krishna centers are constantly being opened in order to fulfill Lord Chaitanya’s prophecy that Hare Krishna will someday be sung in every village and town throughout the world. Our latest center is called New Vrindaban, and is considerably more ambitious than any of our past endeavors. Located outside the Appalachian mountain town of Moundsville, 10 miles south of Wheeling, West Virginia, its purpose is “to serve as a holy place of transcendental pastimes, dedicated to Krishna, the Personality of Godhead.” New Vrindaban consists of 133 acres of land, including a stream with a waterfall and bathing ghats, woods, fields, and pasturage; and a knoll called “Goverdan Hill.” Only a house and a barn stand there now, but plans for the future are evolving quickly. As with all centers of Krishna Consciousness, this one is not located in the material world, but is spiritual by virtue of the work done there in devotion to God. Vrindaban in India is where Lord Krishna displayed His childhood pastimes as a cowherd boy, and one special feature of New Vrindaban is cow protection. Because of the great endeavor to build a spiritual city in the wilderness, with the dynamic determination to create a new and perfect human society, New Vrindaban will not be like the numerous country club ashrams popular with Yoga groups nowadays. Hayagriva Das Brahmachary, co-founder of the project, invites anyone interested to communicate with him c/o the Hare Krishna Temple at 26 Second Avenue in New York