“The whirlwind demon intended to take Krsna up in the sky and kill Him, but Krsna was simply enjoying the ride….” 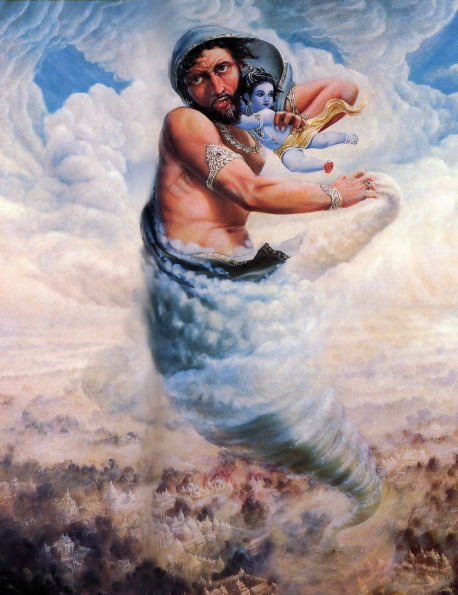 When Lord Krsna, the Supreme Personality of Godhead, came to this earth five thousand years ago, He played as a cowherd boy in the north Indian village of Vrndavana. To please the great souls who appeared as His boyfriends and girl friends and His father and mother. He displayed many wonderful pastimes. In India most people are familiar with Krsna’s activities, and traditionally they celebrate them through music, dance, drama, and literature. In Bhagavad-gita the Lord assures us that anyone who meditates on these pastimes can rejoin Him as one of His eternal companions in the spiritual world

When Krsna was a mere infant, He killed the witch Putana, who had tried to make Him suck her poison-smeared breast (See BTG 12/3). As we’ll see in this issue, soon afterward Krsna foiled Sakatasura (the cart demon), and when He was barely one year old He killed the Trnavartasura (the whirlwind demon).

Just after baby Krsna turned three months old. His mother Yasoda noticed that He was slanting His body in an attempt to rise and turn around. To celebrate this auspicious sign, she arranged to observe the Vedic ceremony called utthana, a bathing ritual performed when a child is due to leave the house for the first time. So mother Yasoda called together the neighborhood women to assist her. Brahmana priests also came, and they chanted Vedic hymns while bands of musicians played instruments and sang.

During the ceremony mother Yasoda saw that baby Krsna was falling asleep, and she placed Him in a cradle underneath a household cart. While the child slept, mother Yasoda became absorbed in receiving guests, garlanding them with flowers, and offering them presents. When Krsna awoke. He began crying for His mother. He wanted to drink the milk from her breast. But mother Yasoda was busy elsewhere and could not hear Him. All of a sudden, Krsna threw His legs upward and struck the cart. Although His legs were tiny and very soft, the cart turned over violently and collapsed. The wheels separated from the axle, the hubs and spokes fell apart, and the pole of the handcart broke. On the cart were many utensils made of various metals, and all of them scattered hither and thither.

When mother Yasoda, her husband Nanda Maharaja, and all their guests saw the situation, they began to wonder aloud: “Is this the work of some demon or evil planet?” Then the small children present said, “As soon as baby Krsna kicked the cart’s wheel, the cart collapsed. There is no doubt about it.” But the adults could not believe that little Krsna had such inconceivable power.

Mother Yasoda called for the brahmana priests and had them chant mantras to counteract the influence of the bad planet she believed to be the cause of the accident. Meanwhile the stout, strong cowherd men put the pots and other utensils back on the cart and set it up as before. Then Krsna’s father Nanda Maharaja took his child on his lap and bathed Him with water mixed with pure herbs.

Actually, the cart had been haunted by the ghostly demon Sakatasura. Since he was without a body of his own, the ghost had taken shelter of the handcart and had been waiting for a chance to do some mischief to Krsna. But when Krsna kicked the haunted cart with His small, delicate legs, Sakatasura was immediately pushed down to the ground and killed. An ordinary infant would not have been able to do such a thing, but Krsna was more than able, because He is the Supreme Personality of Godhead. Also, when the cart collapsed, an ordinary child would surely have been injured, but Krsna came out unhurt—in fact. He thoroughly enjoyed the whole episode.

Not long afterward, when Krsna was a year old, mother Yasoda was playing with Him on her lap. Sometimes a mother lifts her child, and when the child falls in her hands, the child laughs, and the mother also enjoys pleasure. Yasoda was doing this, but suddenly she felt Krsna to be heavier than a mountain peak, and she could no longer bear His weight. Krsna had exercised His inconceivable potencies and had mystically assumed the weight of the universe. It seems that Krsna was aware that the whirlwind demon Trnavarta was coming to take Him away. Not wanting His mother to suffer any difficulty from the demon. He became so heavy that she had to put Him down.

But mother Yasoda couldn’t understand what was really happening. She called the brahmana priests to chant hymns for her son’s safety. Then, while Krsna was sitting on the ground, the Trnavarta demon came as a whirlwind and very easily carried Him into the air. This was another demonstration of Krsna’s mystic potencies. One moment He had become heavier than the whole universe, so that His mother would have to set Him down, and the next moment He became lighter than a piece of grass, so that Trnavarta could carry Him away. This was all ananda-cinmaya-rasa—Krsna’s blissful, transcendental pleasure.

Covering the whole land with clouds of dust, the demon obscured everyone’s vision and began vibrating everywhere with a fearful sound. For a moment the whole pasturing ground was overcast with dense darkness from the dust storm. Mother Yasoda could not find her son, nor could she understand why. She fell down on the ground like a cow who has lost her calf, and she began to lament very pitifully. When the force of the dust storm subsided, Yasoda’s friends approached her. Not seeing Krsna, they joined mother Yasoda in crying.

Meanwhile, by his mystic power the whirlwind demon was carrying Krsna high into the sky. But then Krsna suddenly became much heavier, and the demon had to stop in midair. Krsna was challenging Trnavarta to a competition in yogic power, and Trnavarta was doomed to lose, because Krsna is the Supreme Personality of Godhead.

Unfortunately, even today many so-called yogis and babas present themselves as greater than God by showing some insignificant mystic wonder before foolish people who have no knowledge of Krsna.

Trnavarta intended to take Krsna up in the sky and kill Him, but Krsna was simply enjoying the ride. Now Trnavarta was falling because of Krsna’s heaviness, and he wanted to save himself by throwing Krsna off from his neck. But he was unable to do so, because Krsna was grasping him by the throat. Unable to make a sound or even move his hands and legs, Trnavarta choked and his eyes popped out. The demon lost his life and fell, along with little Krsna, down to the ground.

While the women who had gathered were crying for Krsna, the demon fell from the sky onto a big slab of stone, smashing and dislocating all his limbs. The astonished cowherd women saw that Krsna was uninjured and free from misfortune and was playing on the demon’s chest very happily. They immediately picked Him up and brought Him back to mother Yasoda. She and Nanda Maharaja and all the inhabitants of Vrndavana were overjoyed.

For thousands of years, sages have meditated upon these pastimes with great pleasure. It is said that both Krsna and those who enjoy Krsna’s pastimes are ananda-cinmaya-rasa—always free from unhappiness and full of transcendental bliss.

“Riding the Whirlwind Demon” was adapted from Srimad-Bhagavatam, translation and commentary by His Divine Grace A.C. Bhaktivedanta Swami Prabhupada.