The first day I saw devotees chanting was October 16, 1966. They were at Tompkins Park in New York City. Initially I was captivated by the dancing. Some minutes later, though, I noticed Srila Prabhupada. He was sitting inconspicuously on the ground at the edge of the circle of dancers, keeping the rhythm on a little tom-tom or bongo drum, allowing the flamboyant hippies of the Lower East Side to take the center stage. His eyes were closed and his brow was knit as he chanted with great intensity and without any concern for people’s worldly opinion of him. After an hour or so he got up to speak on the philosophy of Krsna consciousness. His voice was strong and his clarity of thought was impressive—yet he still maintained his humble demeanor. His example of faith and humility moved me. He was praiseworthy, but he wasn’t looking for praise. His knowledge of God made him think of himself as very small, and because of this he was very great. It was plain to see, right from the beginnig.
Damodara dasa

Srila Prabhupada was an expert cook. “I learned just by watching,” he used to tell us. I remember once he was staying at his Bombay temple, and I was helping another girl, Palika, cook for him. This was in December of 1976. Every day Srila Prabhupada would take his main meal at one-thirty in the afternoon-small amounts of nicely prepared Indian vegetarian dishes. So to cook all these things—about eleven preparations—Palika and I would have to start at eleven in the morning, and the two of us would have our hands full cooking right up to the last minute. And by any normal standard we were doing it pretty fast. 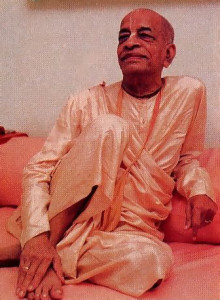 Then one day Srila Prabhupada came into the kitchen and told us he was going to cook it all in forty-five minutes. His doctor had told him not to see any visitors that day, so he had time to do it. We had a special three-tiered cooker that he’d designed himself, and he put everything for the whole meal in it. He put the dahl (a spicy bean soup) in the bottom.

On the second level he put his rice and several kinds of vegetables. And he put more vegetables on the top. Then he put the whole set-up on the flame. So he had all the ingredients for the meal cooking at the same time. (Palika and I had tried to use the cooker, too, but we could only manage three preparations at once. The rest we had to cook in separate pots on the stove.) So when Srila Prabhupada had everything going, he just turned to us and said, “Now you go take rest for forty-five minutes.” We were amazed.

We came back forty-five minutes later and everything was almost ready. Then Srila Prabhupada spiced all the dishes and made some capatis (flat round bread), and that was a whole gourmet meal for four people. On the table was a plate of milk sweets a devotee had brought from America. As a final touch, Srila Prabhupada put some sweets on each plate and said, “This is the success of my mission, don’t you think?”
Srutirupa-devi dasi

Years ago in Hawaii we had a problem: our huge, seven-foot-tall tulasi plants were overgrowing the temple gateway. [Tulasi is a plant described in the Vedic literatures as being sacred to Lord Krsna.] We asked Srila Prabhupada whether the branches should be pruned, since guests had to duck beneath them to enter. Srila Prabhupada chuckled, thinking it nice that people had to bow to enter Krsna’s temple. He said we should tie the branches back a bit, but he warned us not to cut them.
Govinda-devi dasi

The scriptures teach that the devotees worship the spiritual master on an equal level with God, but that the spiritual master thinks of himself only as the humble servant of God. “Nonsense!” proclaim the skeptics. “No one can receive that worship and remain humble.” They didn’t know Srila Prabhupada.

Once I was with a large group of devotees who accompanied Srila Prabhupada to Kennedy Airport to see him off. He sat in the airline boarding area while we crowded in around him, sitting at his lotus feet, anxious for a last few minutes of association with our beloved spiritual master. Srila Prabhupada spoke softly; we listened intently; two yak-tail whisks rose and fell behind Srila Prabhupada’s head. We could have stayed there forever.

But I could see some angry airline officials at the back of the crowd. Other passengers for the plane could not enter the boarding area. We would have to move, but the officials were failing miserably at persuading us to relinquish our place at the feet of the representative of God. The officials found Rupanuga, one of our leaders. There was some intense discussion. Meanwhile Srila Prabhupada had stopped talking; drums and hand cymbals sounded, and the Hare Krsna mantra filled the air. The airline officials grew frantic.

Suddenly Rupanuga bounded up on a chair, cupped his hands around his mouth, and began to shout with all the authority at his command, which was considerable. Everything stopped. All faces turned up in astonishment. “All devotees get out!” he commanded. “Leave this area at once!”

While everyone sat momentarily stunned by the sudden interruption of these stentorian commands, Srila Prabhupada was immediately on his feet, looking obediently for a way out of the boarding area.

“Not you, Srila Prabhupada!” said Rupanuga. I became jubilant with love for Srila Prabhupada, who had thus so naturally revealed his mind: while we worshiped him like God, he considered himself an ordinary person, and so he humbly and promptly obeyed his servant’s command.
Ravindra Svarupa dasa