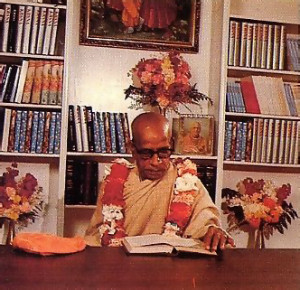 Just-released Bhaktivedanta Book Trust figures (for the period October 1966 to March 1978) show that Srila Prabhupada’s translations of India’s Vedic literatures now appear in some twenty-seven languages and have gone well over the sixty-six-million mark: 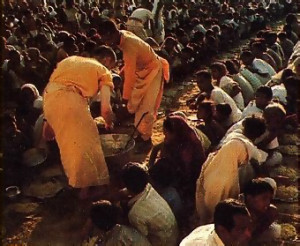 After meeting in New Delhi with two of the Indian government’s secretaries of agriculture, Sri A. Das and Sri S. P. Mukherjee, Jayapataka Svami reported that both men were favorably impressed with ISKCON Food Reliefs work in India. Mr. Das and Mr. Mukherjee promised that the Indian government would help ISKCON import grains, butter, oil, and powdered milk from nations with food surpluses. Jayapataka Svami said the secretaries would like to see ISKCON expand its food relief and welfare activities in India.

ISKCON Food Relief has its roots in ancient India’s Vedic culture. For thousands of years, devotees have offered large quantities of food to Krsna’s Deity form and then distributed the food as prasada, “the Lord’s mercy.” 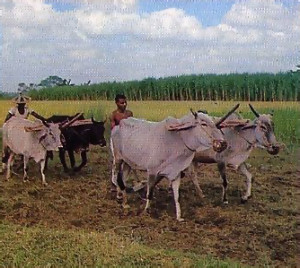 Alternative to an artificial economy

One of India’s leading economists is now asking his government to look to ISKCON’s farm communities for “a new direction in rural development.”

Mr. Kotiswaran Jayaraman, who served for ten years as a director of the national Rural Community Development Program, made his suggestion in Bombay’s Financial Express (the Indian equivalent of the Wall Street Journal). In a series of articles entitled “Rural Development: the ISKCON Way,” Mr. Jayaraman said, “Mayapur in West Bengal and New Naimisaranya near Hyderabad are outstanding examples of ISKCON’s growing farm communities in India with an immense potential for giving new direction to rural development in the country as a whole.”

The former director of rural community development explained that ISKCON’s farms offer a positive alternative to the artificial economy of the cities, and that they enable people to live peacefully and happily while pursuing spiritual life. Mr. Jayaraman urged government rural development agencies to cooperate with, or even follow outright, ISKCON’s successful program of “simple living and high thinking.” Finally, he called on India’s educated young men and women to come forward and organize an ISKCON-style program for the whole country.