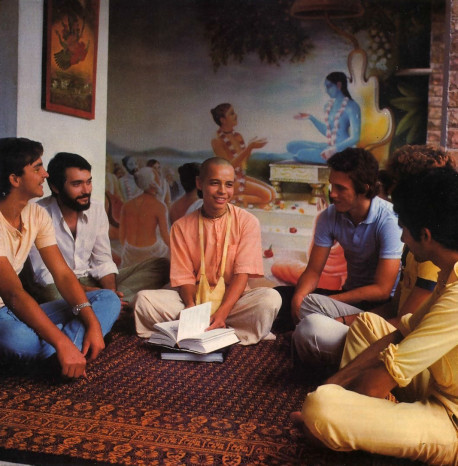 Q. What is the Hare Krsna maha-mantra?

A. A mantra is a transcendental sound vibration that delivers the mind from material anxieties. Of all mantras, the Hare Krsna mantra is the maha-mantra, the great mantra. Composed entirely of God’s names, it appears in the ancient Sanskrit scriptures called the Upanisads: Hare Krsna, Hare Krsna, Krsna Krsna, Hare Hare/ Hare Rama, Hare Rama, Rama Rama, Hare Hare. The name Hare addresses the spiritual energy of God. It’s like calling out “O energy of God!” The name Krsna means “all-attractive” and thus calls upon the Supreme Personality of Godhead. Rama, another name of God, means “the highest pleasure.”

Q. How does the Hare Krsna maha-mantra work?

A. The greatest teacher of the Hare Krsna mantra is Lord Caitanya, the incarnation of Krsna who appeared five hundred years ago in India. About the maha-mantra He once said, “It cleans the heart of all the dirt accumulated for many lifetimes and puts out the fire of material life, of repeated birth and death.” According to the Vedic literature, we experience difficulties in life only because we have lost touch with our original, pure consciousness. In that original, spiritual state we do not suffer birth, death, disease, or old age. This spiritual nature—our real identity—is always present within us, but we have temporarily forgotten it. Chanting Hare Krsna is therefore not an artificial imposition on the mind. Rather, it clears the dust from the mirror of the mind so that we can see our original consciousness—our identity as eternal parts of the Supreme. By chanting the name Krsna, Krsna is present (the names of God are not different from God), and His presence purifies us and brings us transcendental happiness. To chant, one should simply repeat the mantra and hear the sound vibration. One can sing it (alone or in a group) or softly repeat it to oneself.

Q. How do you know the chanting is not some kind of hypnotism? 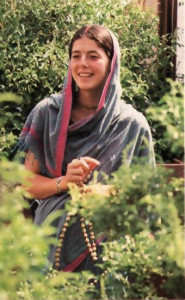 A. A hypnotic trance is an induced state that resembles deep sleep and makes one susceptible to external suggestions. People who regularly chant Hare Krsna do not show these symptoms. Nor is the chanting part of the hypnotist’s repertoire. The Hare Krsna maha-mantra concerns only the spirit soul on the transcendental platform. In India especially, persons in the guru-disciple succession have chanted it for thousands of years, and the scriptures recommend it as a standard form of meditation.

Q. How does chanting the Hare Krsna maha-mantra differ from other forms of meditation?

A. It is the easiest form of meditation, and the one most recommended by bona fide saints, sages, and scriptures. On the other hand, it is very difficult to correctly perform the kind of meditation in which one sits silently without moving. To do so one has to give up all material desires and practice meditating alone for a long time in a secluded place. The so-called meditation practiced by popular yoga clubs is an imitation of the solitary, mystic meditation. It is a complete farce to practice such “meditation” while living in a big city and maintaining habits like intoxication and illicit sex. Yet anyone anywhere can enjoy immediate results by performing the simple meditation of chanting the Hare Krsna maha-mantra. Therefore the Vedic scriptures have recommended it as the only practical meditation for this age.

Q. Do you have to change your way of life to benefit from the chanting of Hare Krsna? 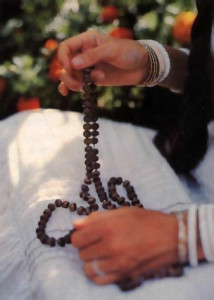 The best way to focus the mind while chanting the Hare Krsna maha-mantra is to use a string of 108 chanting beads (please see coupon on inside back cover ). One can chant indoors or out, sitting or standing, and at once feel spiritual pleasure.

A. No. Lord Caitanya emphasized that to attain the full benefits one need only chant Hare Krsna in a humble state of mind. In other words, one should humbly call out to God and pray to be engaged in His service. But one doesn’t have to live in a special community or shave his head or dress in a certain way. Nor does one have to leave his family or occupation. Of course, those who have received the mantra from a genuine spiritual master, and who agree to follow some basic rules for avoidance of sinful life, will make very rapid advancement. In any case, one is advised to associate with others who are chanting Hare Krsna.

Q. What is the goal of chanting Hare Krsna?

Q. How will chanting the Hare Krsna maha-mantra help the world?

A. The only difficulty with the world is its lack of God consciousness. So the more that people take to the chanting of God’s names, the more auspiciousness there will be. Otherwise, the world will continue to move toward the brink of destruction. The chanting of the Hare Krsna maha-mantra is not an exercise for a few. It is meant to bring peace to the whole world.