Ratha-yatra – An Ancient Festival Comes to the West 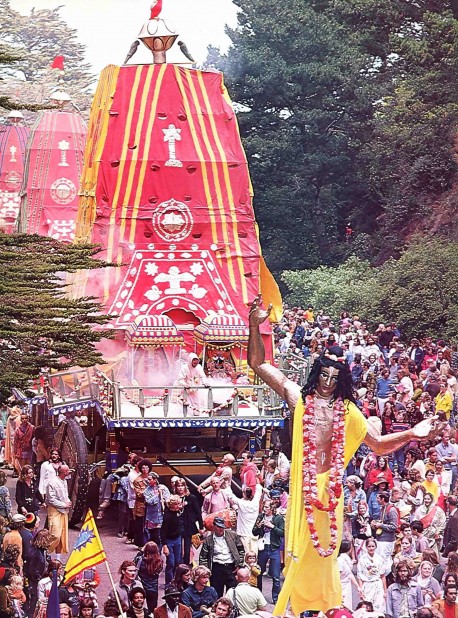 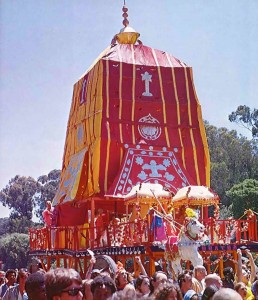 It was in San Francisco, 1967, that Srila Prabhupada’s disciples first came to him with a small, carved wooden image. They didn’t know what it was, but they were attracted to it—its bright colors, red, black and green, and its large, saucerlike eyes. Moreover, the unique form was labeled “Made in India.” The neophyte devotees couldn’t help being surprised when Srila Prabhupada, upon seeing the image, immediately offered his obeisances and requested that two similar images be brought from the import emporium where one of his disciples had come across the first one. Thus, in this unassuming way, the eternal forms of Lord Jagannatha, the Supreme Personality of Godhead; His sister, Subhadra; and His elder brother, Balarama, made Their divine appearance in the International Society for Krishna Consciousness. Upon Srila Prabhupada’s order, the disciples recarved the three-inch Deities in a much larger size, placed Them upon the altar of the San Francisco temple, arranged a curtain around Them, and from that time onward offered Them all respect and worship. 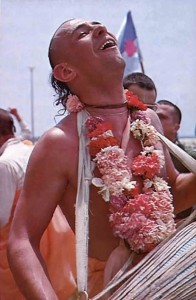 Through the sastras, or scriptures we learn that God’s energy is everywhere. God is not different from His energy, just as the sun is not different from the sunshine; therefore it is correct to say that God, in His energy, is everywhere. However, it is not possible for us to establish an intimate relationship with this impersonal, all-pervasive aspect of God. Therefore, to enable us to relate to Him personally, God, the Supreme Person, descends to the material world in the authorized form of the Deity. In unusual circumstances, such a Deity may be found in an unlikely place, such as an import emporium, but no matter where He is, He remains the Supreme Personality of Godhead, the summum bonum, the cause of all causes. We may find gold in a dirty place, but its value does not change; it is still gold. So, Krishna is always Krishna, wherever He may be. He is always Jagannatha, the Lord of the universe. As a pure devotee of Lord Jagannatha, Srila Prabhupada perfectly realizes that the form of Lord Jagannatha and Lord Jagannatha Himself are non-different. Therefore he offered obeisances to the Lord and instructed his disciples to worship the Deity. 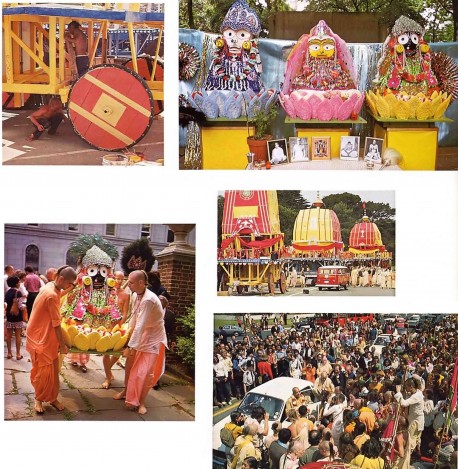 (1) Preparing for the celebration. Devotee carpenters make the five-ton, forty-five-foot high carts. (2) The Deities of Lord Jaganntitha (far right), Subhadra (center), and Balarama (left) made Their first public appearance in the western world in San Francisco, June, 1967. (3) Three huge carts await the arrival of their transcendental passengers in Golden Gate Park, San Francisco. (4) Jagannatha, the Lord of the universe, on His way to the ratha cart, where He will sit and observe the festival in His honor. (5) Srila Prabhupada participates in Ratha yatra every year, just as he did in his childhood. Here he arrives at the London ceremony.

Simply by following sincerely the instructions of an expert spiritual master, one can make spiritual advancement, surely and certainly. Thus when Srila Prabhupada explained that there should be a great festival in honor of Lord Jagannatha each year, his disciples were eager to make the proper arrangements. Malati-devi dasi, the young disciple who had first brought the small carved Deity to the San Francisco temple, recalls: “One day Srila Prabhupada called us up to his quarters and told us about a wonderful yearly festival in Puri, Lord Jagannatha’s home in India. He requested that we also hold this great festival, called Ratha-yatra. He said that Jagannatha should be kept in seclusion for fifteen days prior to the festival, and in that time we should thoroughly cleanse and repaint the temple. So that’s what we did. Srila Prabhupada explained that Jagannatha, Balarama and Subhadra should ride in three hand-pulled vehicles with wheels about eight feet high. But for the first festival we had to simplify things, so we used a large flatbed truck, decorated with leaves and flowers. We began at the corner of Haight and Lyon Streets and proceeded to the ocean.” During the journey, the devotees continuously chanted Hare Krishna and distributed fruit and chapatis (a kind of bread) that had first been offered to the Lord. “It was Lord Jagannatha’s first public appearance in the West,” said Malati dasi, “and what was lacking in opulence was made up for by everyone’s enthusiasm.”

The Ratha-yatra ceremony has always been very dear to Srila Prabhupada. When Srila Prabhupada was a young boy, his father, Gour Mohan De, who was also a great devotee of the Lord, built him a small cart. Then, at the same time that Lord Jagannatha, Balarama and Subhadra were being magnificently pulled through the streets of Jagannatha Puri in three giant carts with millions of pilgrims in attendance, Srila Prabhupada and his young friends would pull their small cart through the streets near their home in Calcutta. This procession, although small, was nonetheless glorious. Just in front of the cart some of the youngsters played mrdangas (drums) and karatalas (cymbals) and sang for the Lord’s pleasure. Others pulled the cart with ropes, while still others cared for the Deities during Their journey, fanning Them and seeing to Their comforts. As the jubilant group passed, people would stop their work, come out of their homes or offices to watch, and be reminded of the Lord. In this way, everyone benefited. As confirmed in the revealed scriptures, “A person who sees the Lord’s Ratha-yatra car festival and then stands up to receive the Lord can purge all kinds of sinful results from his body.” (Brahmanda Purana) A similar statement appears in the Bhavisya Purana: “Even if born of a lowly family, a person who follows the Ratha-yatra car when the Deities pass in front or from behind will surely be elevated to achieving equal opulence with Visnu, the Supreme Lord.” 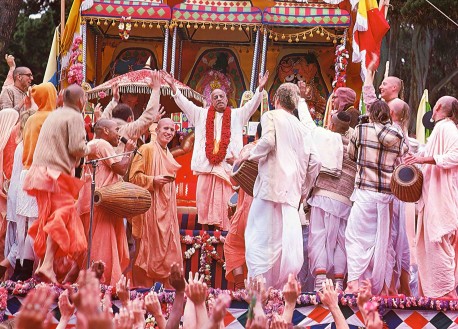 As San Francisco’s 1974 Ratha-yatra festival concludes, Srila Prabhupada leads the entire audiance, thirty-thousand, in a joyful kirtana (chanting of the holy names of the Lord).

As the children grew, Gour Mohan De would have the cart built proportionately larger, and each year the children would distribute ample prasada (food that had first been offered to the Lord in love) to one and all. Thus by imitating their elders these fortunate children were honoring the Lord from the beginning of their lives.

Every one of us has a natural tendency to honor someone, just as a child has a natural propensity to walk. This propensity to honor and love someone is present in every living being. Even an animal like a tiger has this loving propensity at least in a dormant stage, and it is certainly present in human beings. The missing point, however, is where to repose our love so that everyone can become happy. At the present moment, human society teaches one to love his country or family or his personal self, but there is no information about where to repose the loving propensity so that everyone can become happy. That missing point is the Supreme Personality of Godhead, Lord Jagannatha, and by celebrating different ceremonies in honor of the Lord, such as Ratha-yatra, we can learn to stimulate our original love for the Lord and thus enjoy our blissful life. 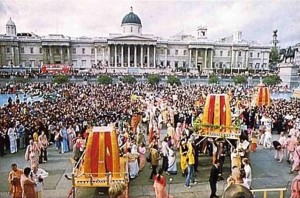 Crowds jam London’s Trafalgar Square as Lord ]agannatha and His associates take Their places on the steps of the Nelson Monument.

It is for this reason, to revive the God consciousness dormant in their hearts and in the hearts of others, that Srila Prabhupada first asked his disciples to organize a Ratha-yatra festival. Now this ceremony is observed not only in Jagannatha Puri and San Francisco (which Srila Prabhupada has called New Jagannatha Puri), but also in many of the other centers of the International Society for Krishna Consciousness around the world. Previously Srila Prabhupada was participating with his playmates in this great event, and today he is still participating, but now with his disciples. That is the nature of a pure devotee; he is continuously and fully absorbed in his eternal loving relationship with the Supreme Lord. Such a pure devotee is described in Bhagavad-gita (9.14) by Lord Krishna Himself: “Always chanting My glories, endeavoring with great determination, bowing down before Me, these great souls perpetually worship Me with devotion.” 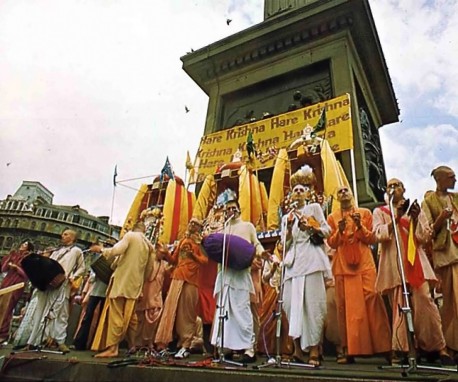 The Ratha-yatra festival that will be held this month in major cities throughout the world will enable millions of people to come directly in touch with Krishna Himself. Those fortunate souls will get the opportunity to sow the seed of love of God in their hearts, and if they water that seed by continuing to hear and chant the maha-mantra—Hare Krishna, Hare Krishna, Krishna Krishna, Hare Hare/ Hare Rama, Hare Rama, Rama Rama, Hare Hare—that seed will fructify, and the spiritual plant of their love of Godhead will start to grow and grow.

This process of developing our dormant love for God is easy, and it can be performed in a happy mood. One does not have to undergo any severe penance or austerity. We can live this life serving God, guided by an expert spiritual master, and in any position, anywhere in the world, perform some kind of service to the Supreme Personality of Godhead. Thus we can become eligible to go back home, back to Godhead. One can start the whole process simply by participating in the Lord’s wonderful Ratha-yatra festival. Everyone is welcome.

Left: As Jagannatha, Suubudra and Balarama look on, a play based on Bhagavad-gita is performed by a devotee cast after the feast in San Francisco.
Right: Everyone who took part in the celebration enjoys a full-course meal of pure vegetarian prasada (food first offered to Lord ]agannatha).