Back to Godhead > ~Featured~ > The Ratha-yatra festival in Downtown Chicago

The Ratha-yatra festival in Downtown Chicago 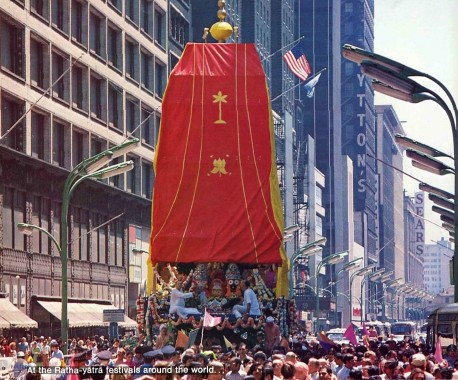 The scene is a downtown area in a great metropolis: honking horns, vendors’ shouts, crowded streets. Business goes on as usual as the towering canopies appear in the distance, accompanied by the rhythmic sound of drums and hand cymbals. Suddenly, the parade explodes into view—three enormous, gaily decorated carts surrounded by waving pennants, astonished onlookers and dancers in saffron robes. As flower petals rain down, the chanting rolls through the city streets in waves, inundating everything and everyone with transcendental sound—Hare Krishna, Hare Krishna, Krishna Krishna, Hare Hare/ Hare Rama, Hare Rama, Rama Rama, Hare Hare. This is the maha-mantra, or Great Hymn for deliverance from material contamination. Composed entirely of the names of God, it is profusely chanted at the Ratha-yatra festival described above.

Ratha-yatra is an ancient festival glorifying Lord Jagannatha, the Supreme Lord of the universe. Although Ratha-yatra has been observed for thousands of years in India, it is not an Indian or Hindu festival. The location of the above scene could just as easily be London’s Trafalgar Square as Puri, India. Since 1966, as a result of the efforts of the International Society for Krishna Consciousness, the joyful Ratha-yatra festival has become an international event. People of all ethnic and religious backgrounds now celebrate Ratha-yatra in cities all over the world.

This year, ISKCON will again present the transcendental Ratha-yatra festival in major cities throughout the world. This issue of BACK TO GODHEAD explains what the Ratha-yatra festival is and how it came to the West. We invite you to experience the spiritual excitement of Ratha-yatra by joining us in the streets of your city or by reading the pages of this magazine.