Back to Godhead > ~Featured~ > Elevation to Ecstasy 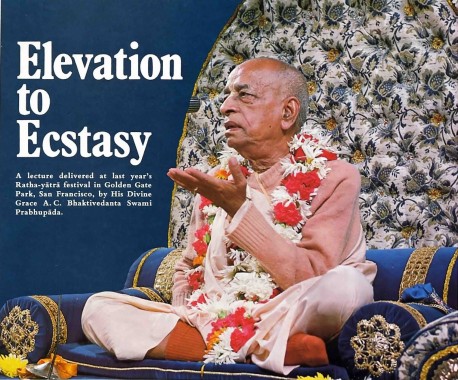 Ladies and gentlemen, devotees and all the sannyasis present, I thank you very much for kindly joining this Ratha-yatra festival. This festival has been going on in India for more than 2,000 years in the city of Jagannatha Puri. The name jagannatha comes from two words—jagat, which means “the universe,” and natha, which means “the Lord.” Thus Jagannatha means “the Lord of the universe.” The Ratha-yatra festival and the sankirtana movement, the Hare Krishna movement, are meant to enable one to realize the Lord of the universe. From Vedic literature we understand that there are not only one but innumerable universes. It is said:

“I worship Govinda, Krishna, the primal Lord, who is endowed with great power. The glowing effulgence of His transcendental form is absolute, complete and unlimited. It is the basis for the varieties of countless planets, with their different opulences, in millions and millions of universes.” (Brahma-samhita, 5.40) Just as the sun is the source of the sunshine, so the Supreme Lord is the source of the impersonal effulgence in which all the universes rest. Srimad-Bhagavatam says, therefore:

This verse informs us that the Absolute Truth may be realized from three angles of vision in three different aspects. One is impersonal (Brahman), and another is localized (Paramatma), but the ultimate phase of the Absolute Truth is the Supreme Personality of Godhead, Krishna.

We find in Bhagavad-gita that Lord Krishna says: “There is no truth superior to Me. Everything rests upon Me, as pearls are strung on a thread.” (Bg. 7.7) Thus the Supreme Personality of Godhead says that He is the ultimate goal, the Absolute Truth. The Krishna consciousness movement, therefore, is meant to help one advance in understanding the Absolute Truth.

The Absolute Truth is very difficult for us to understand, however, because we are living in the age called Kali-yuga, which is an age of fighting and misunderstanding. Prayenalpayusah sabhya kalav asmin yuge janah. One of the symptoms of this age is that almost everyone has a very short life span. We understand from the Vedic literature that in this age one can live for as many as 100 years. There are four yugas, or ages—Satya-yuga, Treta-yuga, Dvapara-yuga and Kali-yuga. In the Satya-yuga, or the yuga of truthfulness, we used to live for 100,000 years. (I say “we used to live” because in fact we are eternal. although we are changing from one body to the next.) In the next age, Treta-yuga, the duration of life was reduced to 10,000 years, and in the next, Dvapara yuga, it was reduced to 1,000 years. Now, in Kali-yuga, our duration of life is limited to only 100 years. But unfortunately, because we are fallen—because our bodily strength, our sense of mercy, our memory and our other good qualities have all been reduced—we do not live for even 100 years. For instance, I am now about eighty years old, so people think that I have lived very long. But eighty years is nothing; we should actually live for 100 years. Because of our sinful life, however, the time is coming when our duration of life will be reduced so much that if a man lives for twenty or thirty years, he will be considered a grand old man.

Therefore, since we are not very comfortable in material life, the Krishna consciousness movement is meant to take us to the spiritual life of the spiritual world. There is a spiritual world, and we receive information about it from Bhagavad-gita. Those who have read Bhagavad-gita know this, and so I shall request all of you to read our Bhagavad-gita, As It Is. We have published about twenty books, each a minimum of four hundred pages long, and Bhagavad-gita is eleven hundred pages. Nevertheless, we shall have to publish about eighty books to fully explain the Krishna consciousness movement.

I know that all the American ladies and gentlemen here are educated and intelligent, and I am very much obliged to the Americans who have helped me make this movement popular all over the world. When Sri Caitanya Mahaprabhu first introduced the Hare Krishna movement, He said:

He thus expressed His desire by saying that anyone who has taken birth as a human being in Bharata-varsa, or India, should understand the Krishna consciousness movement and spread it all over the world for the benefit of all humanity. He also said:

This is a prediction that in all the villages and towns of the entire world, the Krishna consciousness movement will be known. So with the cooperation of you young Americans who are kindly helping to spread this movement, it is now factually becoming well known all over the world. I recently went to Melbourne, Australia, where we held a similar festival, in which many thousands of people joined and chanted and danced with us. Then I went to Chicago, where we held the same ceremony. Now this morning I have come here, and I am so glad to see that you are also joining this movement. 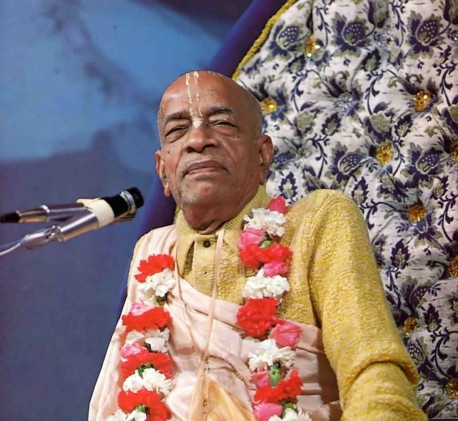 “The Krishna conscious devotees here come from the same country. as you, and formerly they also felt frustrated . . :’

This is a universal movement. Don’t think that it’s something only for Indians or Hindus. It is a movement for every living being. Krishna is the supreme living being, and we are subordinate living beings. Because we are part and parcel of Krishna, we are qualitatively one with Krishna, but because of our material association, we have forgotten that our qualities are in the same category as His. We are qualitatively the same as Krishna but quantitatively different, just as a drop of ocean water is equal in its qualities to the entire ocean, although the drop is but an insignificant portion of the great ocean. We are part and parcel of God, God is great, and we are small; God is the maintainer, and we are maintained; God is the predominator, the master, and we are the predominated servants.

This understanding that God is great and that we are all servants of God is the essence of self-realization. Self-realization means knowledge of one’s own identity. The self-realized person must be able to answer the question, “Who am I?” and since this movement enables one to do so, it is a movement of self-realization. I am therefore very glad that you are taking part in it. 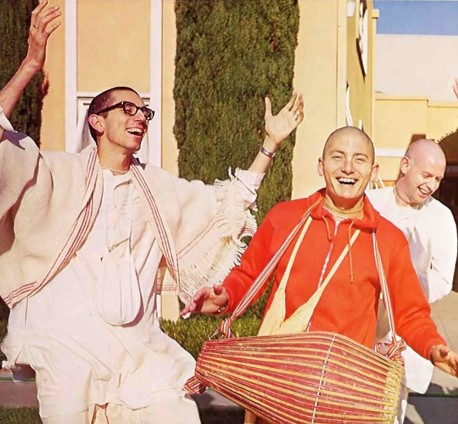 “Now, however, they feel complete, and that is why they are chanting and dancing:’

So I am glad that in Europe, in America and, indeed, all over the world, the Krishna consciousness movement is being very well received. A few days ago, we had a meeting in Melbourne, Australia, in which the Bishop of Melbourne and many other priests greatly appreciated this movement. Indeed, they admitted that they can learn a great deal from it.

I therefore request you not to consider this movement a sectarian movement or a cultural import from India, for this is a movement meant for all humanity. Its purpose is to educate men in such a way that humanity will be lifted to the brahma-bhuta platform, the platform of self-realization. Bhagavad-gita says:

The meaning of this verse is that if you come to the platform of self-realization, or brahma-bhuta understanding, you will always be jubilant. By our constitutional position we are meant to be jubilant, and therefore, despite frustration due to our contact with matter, we are always hankering for happiness. We have to get out of contact with matter and come to the stage of self-realization in order to be always jubilant. If you become self-realized, you will have no more hankerings and desires. Instead, you will feel, “Now I have everything and am fully satisfied.” The Krishna conscious devotees here come from the same country as you, and formerly they also felt frustrated. Now, however, they feel complete, and that is why they are chanting and dancing.

This dancing is not the dancing of dogs; it is a dance of feeling. Those who are dancing are actually understanding God and feeling their relationship with God. Therefore, their dancing is not ordinary, it is a dance of love of God. And it is open to everyone who will simply chant the maha-mantra—Hare Krishna, Hare Krishna, Krishna Krishna, Hare Hare/ Hare Rama, Hare Rama, Rama Rama, Hare Hare.

You are generally young, whereas I am an old man who may die at any moment. Therefore I request you to take this movement seriously. Understand it yourselves and then preach it throughout your country: People outside America generally follow and imitate what America does. I am traveling all over the world, and everywhere I see other countries building skyscrapers and in other ways imitating your country. Therefore if you kindly become Krishna conscious and chant and dance in ecstasy, in emotional love of God, the entire world will follow you. Thus the entire world can become Vaikuntha, a spiritual world in which there will be no more trouble. Thank you very much.