Back to Godhead > Devotees > Preaching > A Prophecy Fulfilled

The flat, verdant ricelands of West Bengal’s district of Nadia appear timeless and remote. Farmers till the soil with oxen and wooden plows in this land seemingly unconcerned with today’s modern world. Yet Sri Caitanya Mahaprabhu, who appeared here five hundred years ago, predicted that the spiritual movement He started here would be broadcast all over the world and would indeed change the direction of civilization.

Sri Caitanya inaugurated the sankirtana movement of the congregational chanting of the holy names of God. While living here in Nadia, He would travel from village to village, chanting Hare Krsna, Hare Krsna, Krsna Krsna, Hare Hare/ Hare Rama, Hare Rama, Rama Rama, Hare Hare. The mission of the Lord is always to deliver the fallen souls, and this chanting works powerfully to reawaken the natural love of God dormant in our hearts. Lord Caitanya, therefore, was fulfilling His mission of mercy simply by chanting and dancing.

Later, after entering the renounced order, (sannyasa), Lord Caitanya traveled throughout the Indian subcontinent chanting the holy names and dancing in ecstatic love of God. The Lord’s chanting would inspire others to chant and their chanting would inspire still others. In this way the sankirtana movement spread (and is continuing to spread) to every city, town, and village.

Lord Caitanya broadcast His message with mrdanga drums and hand cymbals and traveled on foot. He did not spread His movement outside of India, although His plan was that all the peoples of the world would one day take up chanting the holy names and thus awaken their dormant love of God. To fulfill this vision. Lord Caitanya requested His devotees to continue the momentum He had begun in the land of Nadia. 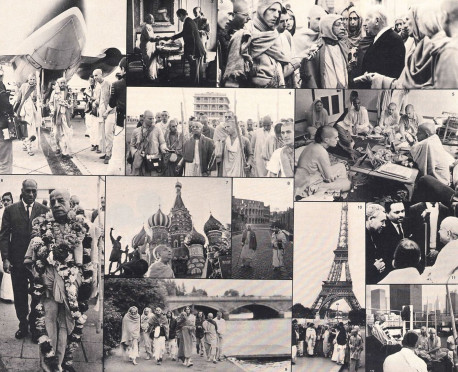 Lord Caitanya, who traversed the beautiful Mayapur countryside five hundred years ago, desired that the chanting of Krsna’s names be spread all over the world, a desire: Srila Prabhupada fulfilled. Srila Prabhupada, the jet-age guru (1), circled the globe fourteen times in twelve years. He met, among others, the mayor of Geneva (2) and German author Baron von Durkheim (3), and he brought his Western disciples back to Mayapur (4) to construct a spiritual city. Whether he was in London (5), Nairobi (6), Moscow (7), Rome (8), Hamburg (9), or Paris ( 10), Srila Prabhupada encouraged everyone to serve Krsna and to chant His holy names. He Spoke warmly with everyone, as seen here in London’s Conway Hall (11) and at the Hare Krsna temple in New York City ( 12).

Srila Rupa Gosvami and Sanatana Gosvami, chief disciples of Sri Caitanya Mahaprabhu, were dispatched to Vrndavana, the place of Krsna’s childhood pastimes. There, in pursuance of the Lord’s order, they authored many books explaining Lord Caitanya’s teachings—not by creative speculation, but by respectfully and extensively citing the Vedic literature. Rupa Gosvami and Sanatana Gosvami wrote and preached, and their disciples and their disciples’ disciples heard and repeated the teachings. Thus the teachings of Lord Caitanya have been purely preserved throughout the five centuries since the Lord’s appearance.

In 1896 the teachings of Lord Caitanya reached the West. Srila Bhaktivinoda Thakura, foremost of Nadia’s disciplic followers of Lord Caitanya, sent a small book he had written in English to McGill University in Montreal. The book was part of his plan to spiritualize Western civilization. He predicted that soon devotees from all over the world would come together in the land of Nadia to worship Lord Caitanya.

Srila Bhaktisiddhanta wanted to send his disciples to influential Western countries to preach. He saw that a preacher’s travel was no longer limited by geographical and cultural considerations. Modern transportation and communication had made the entire world into a great global community, with tremendous potential for spreading the movement of Lord Caitanya. Most sincere Vaisnavas of the day simply saw the Western countries and their technological advancements as synonymous with materialism. How could a follower of Lord Caitanya, they reasoned, go to the West or use Western gadgets and machines? But Srila Bhaktisiddhanta simply saw the opportunity to fulfill the great desire of Lord Caitanya.

It was not until August of 1965, after many years of preparation and struggle, that Srila Prabhupada boarded the steamship Jaladuta for New York City, the heart of Western civilization. Alone, and with little more than his simple sannyasi garb and forty rupees, he arrived in the completely strange and foreign land of America. But he had his copies of his translation of Srimad-Bhagavatam, and he carried the holy name of Krsna. He was the emissary of Lord Caitanya.

Using a pair of hand cymbals he had brought with him, Srila Prabhupada began his mission, chanting with a small band of young seekers on New York’s Lower East Side. With the help of a friend, Srila Prabhupada made a record album, chanting Hare Krsna to the accompaniment of a harmonium and a borrowed mrdanga drum. As news of the Indian swami and his chant spread, more and more young people began joining him at his small storefront for morning and evening classes and chanting.

Human society, at the present moment, is not in the darkness of oblivion. It has made rapid progress in the field of material comforts, education, and economic development throughout the entire world. But there is a pinprick somewhere in the social body at large, and therefore there are large-scale quarrels, even over less important issues. There is need of a clue as to how humanity can become one in peace, friendship, and prosperity with a common cause. Srimad-Bhagavatam will fill this need, for it is a cultural presentation for the respiritualization of the entire human society.

Lord Caitanya’s movement was not to be confined to the limited geographical boundaries of India or the countercultural world of America’s hippies. It was the spiritual movement of the age, meant for delivering all fallen souls from the sufferings of material existence.

Through his personal example, his writings, and his spoken instructions, Srila Prabhupada inspired his disciples to take up Lord Caitanya’s cause. Within one year of his journey to San Francisco, he had completed his first world tour and had sent three couples to London. Within a short time, they had enlisted the help of Beatle George Harrison and had recorded the Hare Krsna chant for Apple Records. This record became a number-one hit on popular music charts all over Europe. And on the sidewalks of major cities of America and Europe, it became common to see sankirtana parties composed mainly of Western young people dressed in the fashion of Lord Caitanya, playing mrdanga drums and hand cymbals and chanting Hare Krsna.

As Lord Caitanya’s international movement grew, Srila Prabhupada instructed his disciples to increase the distribution of the books he had written. This was also sankirtana, he explained.

Srila Prabhupada led the expansion of Lord Caitanya’s sankirtana movement, circling the globe once or twice every year. Wherever he went he preached to government and religious leaders, as well as to the common man. His unshakable faith made him confident that if anyone objectively heard the message of Lord Caitanya, then that person’s life would be transformed. In his translation of Caitanya-caritamrta he wrote, “The Krsna consciousness movement has spread all over the world within a very short time (within five years), and mundane people are very astonished at this. However, by the grace of Lord Sri Caitanya Mahaprabhu, we understand that everything is possible by the grace of Krsna.” The thousands of devotees from all over the world who have heard from Srila Prabhupada and who have responded by dedicating their lives to spreading the sankirtana movement are proof of the power of sankirtana.

During his lifetime Srila Prabhupada traveled around the world fourteen times, visiting major cities on every continent. Yet wherever he went, he usually found himself far from the beloved birthplace of Lord Caitanya in the land of Nadia. He even once referred to an American city he was visiting as “this remote corner of the world”—remote because geographically, culturally, and spiritually, this city was removed from the transcendental atmosphere of that area in West Bengal where Lord Caitanya took His birth and began His sankirtana movement.

It was here in Nadia that Srila Prabhupada chose to establish the international headquarters for the Hare Krsna movement. And here, annually, in fulfillment of Lord Caitanya’s prophecy, devotees from many nations gather to refresh their desire to spread His movement everywhere.